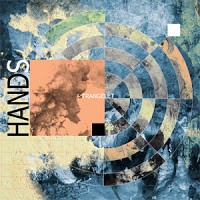 I had never heard of Hands until a couple of years ago, when my good friend Dave (who is also an excellent musician in his own right) sent me a copy of their 2008 album, Strangelet. Incidentally, they had performed at the 2006 edition of ProgDay just a few weeks before my first trip to the US, when I finally met my husband-to-be in person.

Based in Texas, where they were formed back in 1977, Hands have never enjoyed as high a profile as other veteran US prog outfits. In the light of the excellence revealed by Strangelet and its follow-up, the recently-released Caviar Bobsled, that is a real shame.

This album comes with four bonus tracks (in addition to the original seven), which include the stunning instrumental Zenith of Mars, a showcase for Mark Cook (also known for his tenure in Herd of Instinct and Spoke of Shadows), whose Warr guitar creates utterly entrancing atmospheres.  All in all, Hands’ uniquely eclectic take on progressive rock is likely to appeal to most prog fans, regardless of their affiliation.

Read Gerard Wandio's original review from the DPRP archives in 2008.
Read it here.