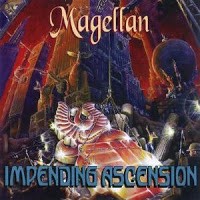 When I first heard Magellan's debut album at a friend's place, I was impressed. Soon after I bought this second album and the melodic bombast blew me away.

My then fellow team member Dirk van den Hout didn't like it much though. Hearing back this album for this article, I recognise what I liked back then, but this part of my taste has gone. (I do like my music very heavy though!) I now hear the patchwork of pieces that do not necessarily fit iton a longer piece, something I recognised right away in the music by Shadow Gallery.

I tend to call this too "American" - too much head, not enough heart (a common problem in prog, I have to add). It just feels cold to me.

Read why Dirk van den Hout thought this album was only worth a score of 5.5 in his review from the DPRP archives in 1998
Read it here.