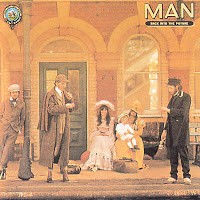 Way back in the mists of time when I was but a callow youth, I went with my younger brother (he was 12 at the time) the many miles from Smethwick, in the UK's then industrial heartland, all the way to Cardiff for an open-air gig at the city's castle.

On an overcast and increasingly rainy 12th of July 1975 we saw headliners 10CC, ably supported by Steeleye Span and Thin Lizzy. I had seen all of these bands before in Birmingham, but also on the bill were a surprise to me in the shape of Welsh band Man. I was not at all familiar with their music, but they were a revelation, proceeding to blow me away with their twin guitar line-up and loose, loping grooves.

On returning home I purchased Maximum Darkness, Man's then current live album. Not their best album as it turned out, but a good intro to their recordings. It led me on retrospectively to the wonderful mix of studio and live tracks that is Back Into The Future. Capturing the band at its peak, it is a wonderful album. I was alerted to the Esoteric re-release by Mark Hughes' cracking review on DPRP.  The re-release confirmed to me that my 17-year-old self actually had quite good taste. Come on and take a trip back in time with this great band that deserves now, as well as back then, to be much better known.

Read Mark Hughes' review from the DPRP archives in 2008.
Read it here.
(Also, you will find Mark's reviews of Man's albums Slow Motion and Maximum Darkness on the same page.)

Watch this video of Man live on German TV back in 1975.
Watch now.