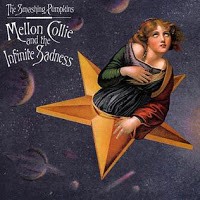 Well, I guess this one may be strange for progressive rock fans but so it was to me when I found DPRP writing about the mighty Smashing Pumpkins.

Mellon Collie & The Infinite Sadness was the first album I bought (I'm "only" 35) and it was different to everything else I was listening at that time. Without knowing it, that album opened my ears, and made me open my mind to different styles. A few years later and I was listening to many prog bands and reading DPRP almost every day. Then I discovered this great review article by Joakim Jahlmar, who put into words everything I have always thought about Mellon Collie & The Infinite Sadness.

Read our special feature on this album written by Joakim Jahlmar in September 2002
Read it here.

Listen to the whole album on Spotify
Listen now.