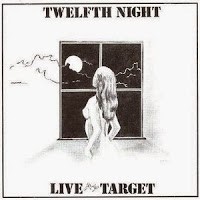 With time's passing, one's taste tends to shift, so sometimes it's nice to see how well one's opinion of some albums has held up. Looking through the list of reviews on DPRP I ran into Live at the Target. The first official CD re-issue was reviewed by our former team member Nigel Camilleri and rated 9/10.

Anyone who knows me because of my musical taste, knows that Twelfth Night have been one of my favourite bands for a few decades now. My taste has made a journey that has crossed the blues and now has reached mostly instrumental post-rock and post-metal. Interesting then to see that this album, an old favourite of mine, has never ceased to impress me or make me feel good, feel warm, feel lost, just feel. At the end of the day, isn't that the most important thing music can do?

I loved and still love the slow build-up of tense atmospheres, the sudden blasts of power, and the creation of well-crafted pieces without becoming overly complex. Music played from the heart, and everything very melodic, just the way I like it. It still touches me and moves me, as it did when I first heard it. I guess that's the definition of an all-time favourite. Whichever direction my musical taste has headed, this album has always been travelling along.

From  the DPRP review archives, read Nigel's original review of Live At The Target in 2005.
Read it here.

A very rare recording of vocalist Electra McLeod, singing Sequences with Twelfth Night at The Target on 21 November 1980.
Listen here.