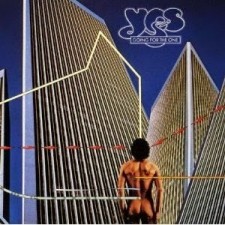 Going for the One was the first album I ever bought. It was the summer of 1977 and I was seventeen years old. Punk was all over the charts and the music press, but this album went to No.1 in the UK album charts. I remember thinking that must have pissed off all the "trendies"!

By October I attended my first ever stadium concert: Yes at Wembley. £4.25 for the ticket and the band played the whole album live.

From the opener Parallels, through the animated ballet dancer backdrop of Turn of the Century, to the Roundabout encore, I can still hear it now.

Back to to the LP, and that lovely sunset, gatefold image of Lake Geneva (Lac Léman), with the band's individual photos, even changed the way that I dressed. Awaken I was.