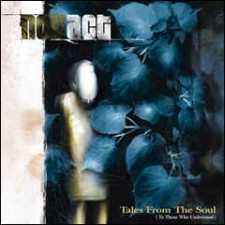 It was a decade ago (almost to the day) when DPRP reviewed the one and only album by this Dutch quintet from Arnhem. We were the first website to pick up on Novact. I'd got hold of their excellent four-track demo, Misunderstood, a couple of years previously. This was quickly followed by a great show supporting Pain Of Salvation at Amsterdam's Headway Festival – a gig that led to the band (then known as Morgana X) being snapped-up by American ProgMetal label Sensory.

Enthused by the band's unique blend of prog metal influences and the engaging voice of Eddy Borremans, I saw them again at ProgPower Europe in 2004 and even travelled to a bar in Arnhem to carry out an interview. I had high hopes that Novact could go on to become something special.

Sadly a mixture of illness, day jobs and life got in the way, and the promise shown on this disc was never given the chance to blossom. Drummer Martijn Peters has gone on to join Stream of Passion, but Tales From The Soul remains an album that I regularly revisit with fond memories.

From the 2005 archives, read the original duo review by the DPRP's Dries Dokter & Andy Read, and see what score they gave the album. Read it here.

Also, from our 2004 archives here is our interview with tyhe band in Arnhem. Read it here.

The whole album can be purchased from the Sensory label website as a CD for a bargain price of $5. Buy it here.