The fifth edition in this series has former reviewer, editor, publisher, and team manager Bob Mulvey take a look at a rarity, the self-titled debut by Molly Bloom from 2002. 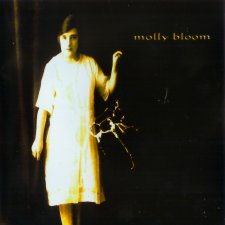 Back in 2004 and initially prompted by one of DPRP's readers, I took the gamble and splashed out on the 2002 self-titled release from Lancashire-based quintet Molly Bloom, along with the 2003 Green Fence EP. As the frenetic opening bars of Mistress Winter emerged from the speakers, I was certainly enticed in, only to be released by the final crash of the opening track.

From there on in, the album went from strength to strength as Molly Bloom's seamless mix of proggy folk-rock, punk, ska, reggae, peppered with the occasional odd meters, neatly infused with Steve Dundon's exemplary flute work, give the band their rather unique sound.

Finally, a liberal sprinkling of wry humour and an overriding sense of enjoyment complete the many ingredients that make up this album.

No better portrayed in one of the album's standout tracks, the splendid If. You just can't fault a track with lyrics like this:

she took the house, and took the car
I swear this woman's ruthless
if I wore dentures, she'd travel far
to leave my mouth all toothless

Additionally, the combination of fine musicianship and humoristic qualities continue throughout with the wonderfully titled Stevie Winwood Haircut and the joyful 50,000 Camels. But it's not all tongue in cheek. Tthe title tune and the evocative Le Ciel Se Dechirait show a different side to the music.

Some twelve years later, the album is as refreshing now as it was when I initially heard it. Sadly these two little gems are no longer available. However, fear not, as the band did eventually go on to re-record several tracks for the rather excellent All Pressure, reviewed for DPRP by Owen Davies, who seems to have thoroughly enjoyed the band's 2014 release.

Although the All Pressure Molly Bloom are a distinctly more muscular beast, they have lost none of their musical prowess or quirky charm.

It would however be a crying shame if the original recordings were lost, so perhaps nice to see both Molly Bloom and Green Fence releases combined and available on a digital platform, such as Bandcamp?

Read Owen Davies's review of the 2014 album All Pressure here.