Episode 9 in this series has former reviewer Bart Jan van der Vorst taking a look back at Fish - Raingods With Zippos, marking a special time in his life! 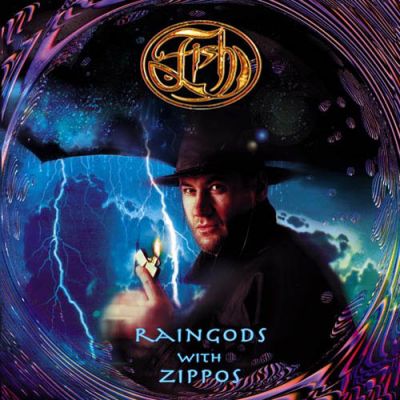 Back in 1998, I was asked to join DPRP to look after the Concert Reviews section, for which I had been submitting reviews on a regular basis. Even though I was an avid reader of the site, liked writing articles and one of my friends was running the news section at the time, I didn't quite see myself as an editor of a (shudder) digital magazine.

After a little bit of persuasion and a crash course in HTML coding, I decided to give it a go anyway. Little did I know DPRP would play a major role in my life for the next twelve years; twelve years in which I encountered a lot of interesting music, met a large number of artists and built lifelong friendships.

In those early days I wasn't too interested in writing CD reviews either; I was happy to continue reviewing concerts and only reviewed the occasional live album, usually one recorded at a gig I had attended.

It was my coverage of the Fish Haddington Convention Weekend in 1998 that led to an invitation from the Dutch Fish fanclub to report on a listening event in early 1999. His new album Raingods With Zippos would be played in front of a select group of fans and press, months before the official release date.

My scribbles of the event were never published in the fanclub magazine, but it did trigger a little discussion on our internal DPRP team forum when reviews editor Ed decided to add his own comments to mine. He encouraged others to do the same and thus the first ever DPRP Round Table Review was born.

Looking back on the album and the period in general, a lot of fond memories come back to me. The listening session and subsequent Round Table Teview led to an interview with the big friendly giant, the interview led to an invitation to an afterparty at his house during the 1999 Haddington convention, which in turn led to a drunken night backstage at Dutch TV show Barend & van Dorp where Fish was a table guest.

In my musical world of 1998/1999, the former Marillion front man was the epitome of Prog Divinity, so getting the chance to spend time with him outside the usual post-gig meet & greet format was an exciting experience. It turned out being an editor for a website wasn't all that bad after all!

I must admit I have rarely played the full album since that time. It's not that it is a bad album, no, far from it: Plague Of Ghosts still stands among the best Fish has ever done in his solo career and that epic still find its way to my ears on a regular basis. However, I have to admit I hardly ever listen to the rest of the album any more. And not just me, Fish himself has only played those songs live on a handful of occasions since 1999.

That said, most of the songs of the first half hold their own as single tracks. Lyrically the whole album is fantastic, containing some of Fish's darkest and most personal lyrics (many of the songs deal with the break-up of his first marriage). Yet in an album context it just doesn't work that well. In our original Round Table Review, all four reviewers made remarks to that extend, but I guess everybody was so impressed by Plague Of Ghosts that we all gave it a "DPRP Recommended" label anyway.

So, Raingods With Zippos, was my first DPRP review of a studio album. Looking back 20 years later, I must conclude it's a rather forgettable album with an unforgettable 25-minute epic and many unforgettable memories that come with it.

Read the original Round Table Review published in 2000.