“A waterfall, his madrigal
An inland sea, his symphony” Genesis (1973)

So far I've discussed how in various ways, progressive rock has drawn on classical music and classical forms. In this penultimate chapter I will look at a curious musical hybrid, that in effect reverses the roles. Utilising renowned classical orchestras (and occasionally choirs), enterprising producers and arrangers with a classical background, turned their attention to mainstream and progressive rock.

Whilst the Boston Pops Orchestra may have been the first, with an album of Beatles tunes in 1969, it was The Orchestral Tubular Bells (1975) arranged by David Bedford and recorded with the Royal Philharmonic Orchestra, that set the wheel in motion. Although a worthy effort by Bedford, perhaps unsurprisingly, original creator Mike Oldfield (a very troubled man in the 70s) voiced his displeasure. 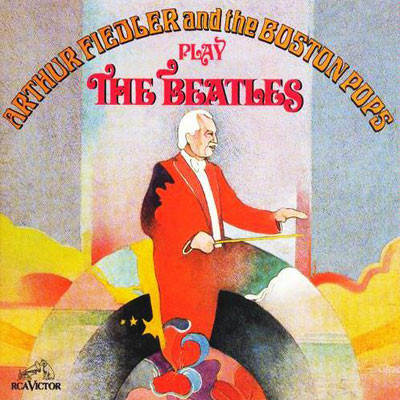 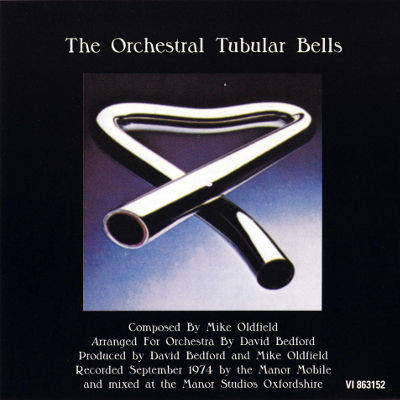 It was the 'Classic Rock' album series however, launched in 1977 featuring the London Symphony Orchestra, that really established the trend. Hugely popular at the time, the LSO performed overblown arrangements of hit tunes by mainstream acts like Queen, David Bowie, 10cc and later, Frankie Goes To Hollywood and Ultravox.

Given that prog is renowned for its elaborate arrangements and symphonic leanings, it's not surprising that several of the more high profile acts would be targeted for similar treatment. A prime mover was ex-Jethro Tull member David Palmer, who from the mid 80s masterminded symphonic tributes to Tull, Pink Floyd, Genesis and Yes. Sadly these were not always as good as they should have been. 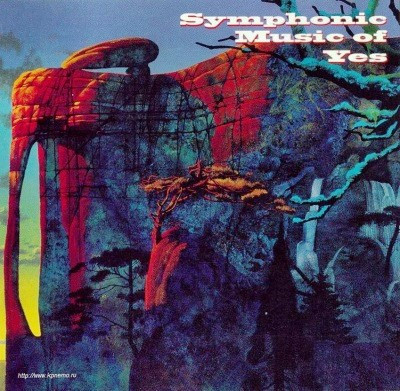 Symphonic Music Of Yes cover Take the Symphonic Music of Yes (1993) for example, arranged by Palmer and produced by Alan Parsons (who both should have known better), it proved to be a spectacular disappointment. In addition to a shamefully abridged Close To The Edge, the London Philharmonic Orchestra and the English Chamber Orchestra are all but lost under the accompanying, and prominently mixed, session band (which included several Yes members).

The main problem with these recordings, is maintaining a satisfying compromise between the orchestra and the elements often retained from the original version, such as the vocals, instrumental solos (guitar, keyboards, saxophone) and a rock rhythm section. Rather than taking centre stage as it would in a classical performance, the orchestra is often relegated to supplying basic backing, playing second fiddle (if you pardon the pun) as it were. 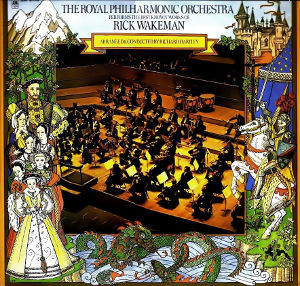 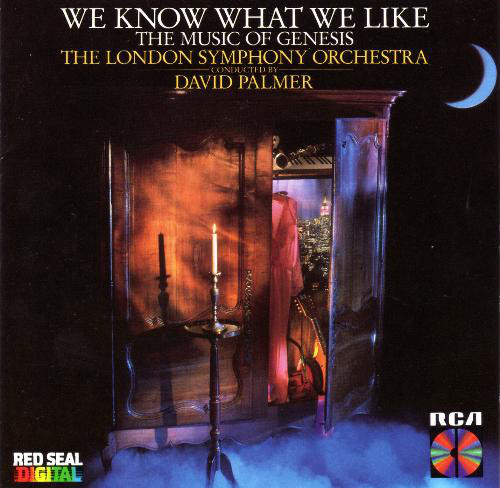 We Know What We Like cover Another example of how to get it right, is the London Symphony Orchestra's inspired, near 10-minute arrangement of Mad Man Moon from We Know What We Like - The Music Of Genesis (1987), conducted by David Palmer. One of my favourite Genesis songs, it's a purely instrumental version, with the orchestra perfectly capturing the nuances of Phil Collins' original vocals.

Like the LSO, the Royal Philharmonic Orchestra record contemporary popular music as a means of funding more 'artistic' endeavours. As such, like the 'Classic Rock' collection, 'The Royal Philharmonic Orchestra Plays' series has a tendency towards mainstream acts like The Eagles, U2 and Abba. Occasionally however, marginal genre bands (especially the more popular) have been favoured, resulting in Genesis Hits and Ballads (1992), Hits of Pink Floyd (1996) and The Music of Rush (2012). To their credit, these are often entirely instrumental recordings, and even Floyd's Us and Them, with its prominent vocals, allows the orchestra to shine through.

Understandably, given their universal popularity, Floyd have received more than their fair share of attention. David Palmer's 1991 tribute Orchestral Maneuvers: The Music Of Pink Floyd  also featured the Royal Philharmonic Orchestra, whilst to confuse matters even more, in 1995 the London Philharmonic Orchestra got in on the act with Us and Them: Symphonic Pink Floyd. 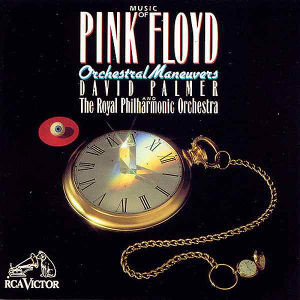 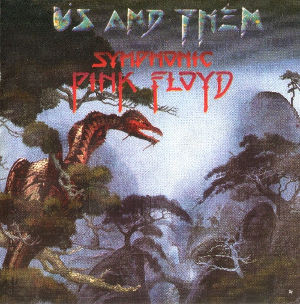 Us And Them cover

Although contemporary prog bands have been mostly immune to such attention, in 2013 Polish composer, arranger and conductor Michal Mierzejewski released A Symphonic Tribute To Dream Theater. One of the better examples of its kind, a 50-piece orchestra and three instrumental soloists superbly capture the spirit of the American prog-metallers.

Despite the inherent short comings of orchestral tributes, they show no signs of abating. Even as I write, The Royal Philharmonic Orchestra Plays Prog Rock Classics has been unleashed with ELP, Focus, Genesis and (inevitably) Pink Floyd amongst others all given the symphonic (and purely instrumental) makeover. The publicity boldly claims that “Fans of progressive rock and epic symphonic rock will not want to miss this!” That remains to be seen.

“That a rock musician had written a piano concerto, was laughable enough for the London Philharmonic Orchestra.” Keith Emerson (circa 2000)

When I set out to write this article, it was planned as a relatively short essay, but things don't always turn out the way they are planned, and like many subjects, the more I researched, the more it grew. So much so, at times it felt like I was writing the history of progressive rock! 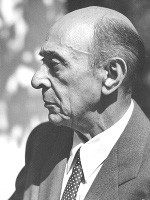 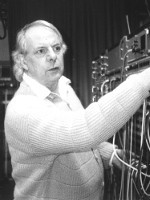 Even now, I've barely scratched the surface, the influence of classical sub-genres like the atonality of Arnold Schönberg, the avant-gardism of Stockhausen and John Cage, or the minimalism of Steve Reich and Philip Glass, remains unexplored. But alas I have to end somewhere, and that somewhere is here. 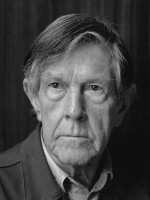 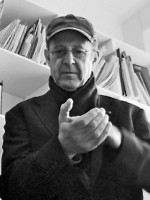 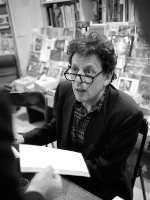 This article, for the most part, has focused on the 1970s, when progressive rock was arguably in its prime, and I make no apologies for that. And if, as critics and naysayers would have us believe, prog was the most unfashionable musical genre of the 20th century, then someone forgot to tell the fans and the musicians. By the turn of the new millennium, there was an international explosion of new acts from far and wide, including West and Eastern Europe, Scandinavia, Russia, Japan, the USA and South America.

Sadly though, whilst film music composers like John Williams, Howard Shore and Hans Zimmer are readily embraced by the classical music fraternity, you are unlikely to hear The Enid or Rick Wakeman played on radio stations devoted to classical music. Even artists like Keith Emerson, Tony Banks and Mike Oldfield, who have produced legitimate classical works, are mostly ignored, whilst "Sir" Paul McCartney has been honoured with a knighthood and performances of his work by classical orchestras around the world.

Thankfully however, as long as progressive rock flourishes and artists continue to break free from the confines of the standard pop-rock format, the distinctions between the genres will be blurred. And if the classical references are perhaps less obvious these days, they are still there if you care to look. Steve Hackett's 2015 album Wolflight for example, contains several classical influences, including Chopin and Tchaikovsky, albeit well hidden. 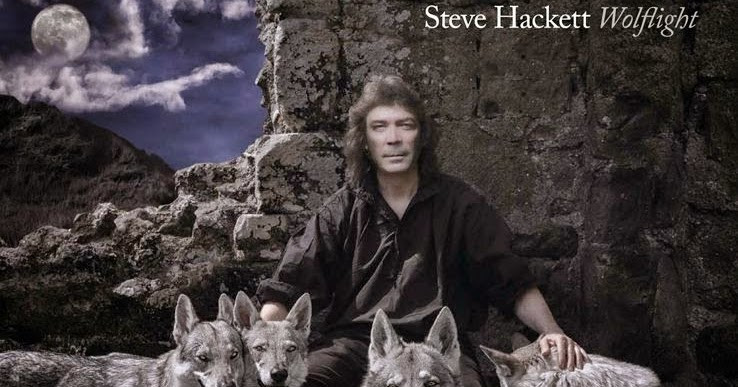 So what of the future? That's hard to predict, during the 60s and 70s it was possible to incorporate a snatch of Bach or Beethoven in a rock song, and trust that no one noticed. But the more technologically advanced we become, the more music will be exposed to dissection and analysis. On a promising note, in conversation with Robert Reed of Magenta just a few years ago, he told me how much he wanted the band to perform with an orchestra. Time will tell.