Classical music, an obvious source of inspiration for an important part of the progressive rock world. DPRP writer Geoff Feakes has dived into the history of prog where classical music can be heard, can be felt. A story published in seven parts, starting here.

It's serious music, often structured in long, complex passages, that's primarily not intended for dancing to, so largely avoids the standard beat with the timbre and texture more important. Performed by highly skilled musicians, it requires significantly more commitment by the listener to fully appreciate, than is typical of most popular music.

A fair definition of progressive rock? Well perhaps, but it's actually a description of classical music, compiled from articles on the subject and augmented with a few words of my own. The fact that it could refer to either genre, is a telling indication of how closely-linked the two are. With that thought in mind, this DPRP special will explore the influence and absorption of classical music in the development of progressive rock.

On the surface, the marriage between prog rock and classical music is an ill-matched one.

“Progressive” literally means “forward looking, constantly changing” (“The river of constant change” as Peter Gabriel sang in 1973), whereas “classical” is defined as a “long established form or style”. In the early 1970s, when prog was in its heyday, it was the new music of its time. Classical was generally regarded as 'old music' and conservative.

However, as both styles transcend boundaries, only on closer examination can the music be fully understood and appreciated. Moreover, if prog rock often mixes the old with the new, then it is following the example set by early 20th century neoclassical composers like Igor Stravinsky who combined elements of the earlier baroque period with contemporary styles like 1920s jazz.

There are of course obvious distinctions. Classical music is usually defined by the period in which it was composed (baroque, romantic, modern etc.) whereas progressive rock is an eclectic fusion, drawing upon a number of styles including traditional rock, pop, blues, jazz, folk, avant-garde, ambient, electronic and of course classical. This feature will for the most part focus on artists and music influenced by the latter, and those that employ classical music styles and structures, e.g. symphony, concerto, solo sonata, chamber music and opera. 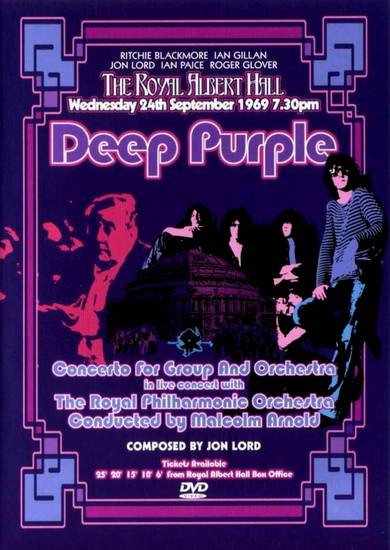 Poster of Deep Purple - Concerto for Group and Orchestra

Given the number of musicians in a standard rock line-up (although that can vary significantly), chamber music would appear to be the most logical classical reference, particularly where traditional (acoustic) instruments are used to supplement guitar, keyboards, bass and drums. It's also not unknown for a band to occasionally engage the services of a string quartet. However sonically it's the power, dynamics and sense-of-scale found in the symphony orchestras from the 1800s onwards that provides a particular source of inspiration for progressive rock. Whilst an orchestra can number up to 100, a rock band can use technology to enhance their sound and sometimes supplement it with guest musicians or even an orchestra (which I shall explore in chapter 7).

These days the term 'symphonic rock' (or 'symphonic prog') is regularly overused, usually referring to bands and artists that employ multiple keyboards and emulate the 'classic' bands of the 1970s. Here, I'll be more specific and apply it to music that follows the classical symphony model established in the 18th century, i.e. a long-form piece usually divided into four distinct movements. A prime example is Yes' Close To The Edge which I shall discuss in detail in chapter 4.

Whilst I'll endeavour to accent the positives rather than the negatives, it's an unfortunate fact that whenever cynical observers identify a connection between a song and a classical piece, then progressive rock is accused of “ripping off the classics”. Prog of course has always courted more than its fair share of bad press. Even back in the 1970s, when it was supposedly at its most fashionable and popular, it regularly prompted bland statements like: “It's not rock and roll” from the naysayers. As such, in comparison with more 'legitimate' genres like classical and jazz, prog-rock has struggled to be recognised as a serious art form. I'll return to this subject in chapter 8.

When I began this article, I failed to appreciate the expansive nature of the subject matter. Thus, what was planned as a short essay, quickly turned into a much longer undertaking written over a six month period. It was therefore necessary to establish boundaries, excluding artists who in my opinion exist outside the prog rock genre, even though their music has a strong classical connection, the Electric Light Orchestra and Sky being prime examples. Electronic exponents like Tangerine Dream receive only a brief mention, as from there it's a fairly short leap to artists like Wendy Carlos, and very soon I could have headed off in a completely different direction.

What remains I hope will be informative, thought-provoking, perhaps even entertaining to anyone with more than a passing interest in progressive rock and its classical heritage.

Chapter 1: In the Beginning

I used to listen to Bach when we were in The Beatles. That was probably our favourite composer then. Paul McCartney (1997) 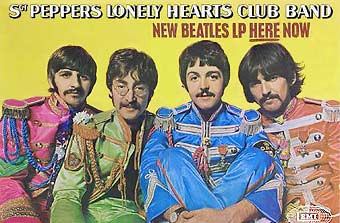 In the mid to late 60s there was a marked upturn in vinyl record sales, partly brought about by the pop and rock boom and the burgeoning LP (album) market. At the forefront were The Beatles who had risen from youthful pop beginnings, to mature and ground-breaking works like Sgt. Pepper's Lonely Hearts Club Band (1967). Whilst the status of Sgt. Pepper as a concept album, or indeed the first progressive rock album, is open to debate, there's no denying that the Fab Four encouraged other artists to follow in their experimental footsteps. The commercial success also gave record companies the confidence to support this unprecedented artistic freedom, and in 1968 albums outsold singles for the first time.

Despite the musical advances in the early 1970s, vocals in the verse-chorus tradition remained a staple ingredient for popular bands like Yes, Genesis and Jethro Tull. As a result the influence of classical music which is often considered in purely instrumental terms was not always obvious. That's despite a classical tradition of popular choral works like Beethoven's Symphony No.9 and the operas of *Richard Wagner. It's also worth remembering that until the 16th century, when music developed as a listening (rather than a dancing) experience, vocal music was more common than instrumental.

Whilst purely instrumental prog bands were pretty scarce in the 1970s (unless you include jazz fusion) several acts challenged the accepted balance of power between voice and instruments. For Focus, Wishbone Ash, Camel, Gryphon and the Canterbury bands, singing was often a secondary role for one or more of the band's instrumentalists. It's also worth noting, that in prog and rock in general, the term “hook” is regularly used to reference an instrumental phrase rather than a vocal one.

As progressive rock developed, then so did both the musicians themselves and the technology to support them, whilst instrumentation became more diverse. A good singer or a talented instrumentalist is clearly an asset to any band but if the vocalist could also play the flute, or if the keyboardist was also a gifted violinist, then so much the better. By the time Gentle Giant came to record Octopus (1972) for example, their sonic pallet had been broadened to include traditional (orchestral) instruments like trumpet, trombone, xylophone and violin, all played by the band members themselves.

During the heady atmosphere of the 70s, virtuoso musicianship, developing technology (especially keyboards and recording facilities) and the desire to write longer-form songs all contributed to the progressive rock explosion. As a result, it was possible to create a classically-inspired symphonic sound without the need to engage the services of an orchestra.

Whether consciously or unconsciously, and for better or worse, by the mid-seventies progressive rock had become "thinking man's rock" forging a clearly discernible link with classical music, that would be celebrated and derided in equal measures for years to come.