Dutch proggers Silhouette have been making a name for themselves these past years. For their latest album they planned a special release party at one of their homes. DPRP was invited and Theo Verstrael jumped at the chance. This interview is published in conjunction with a Duo Review of said album. 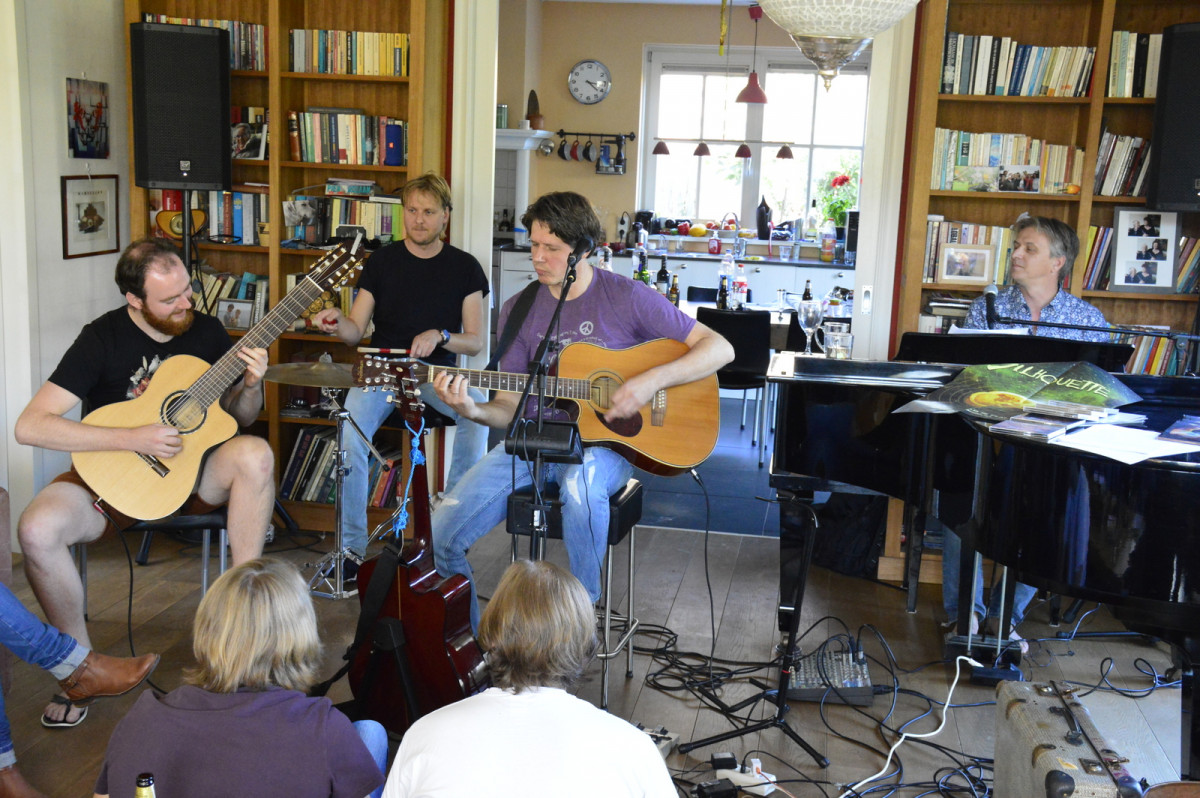 Just two weeks prior to the actual event DPRP was invited by Dutch prog band Silhouette to attend the official release party of their fifth studio album The World is Flat And Other Alternative Facts. Because I cherished their former album Beyond The Seventh Wave I was quite eager to go and fortunately enough there was some space in my agenda. So on Saturday afternoon I got in my car and travelled to the very nice house of Erik Laan, keyboardist, lead vocalist, and one of the founding members of Silhouette. 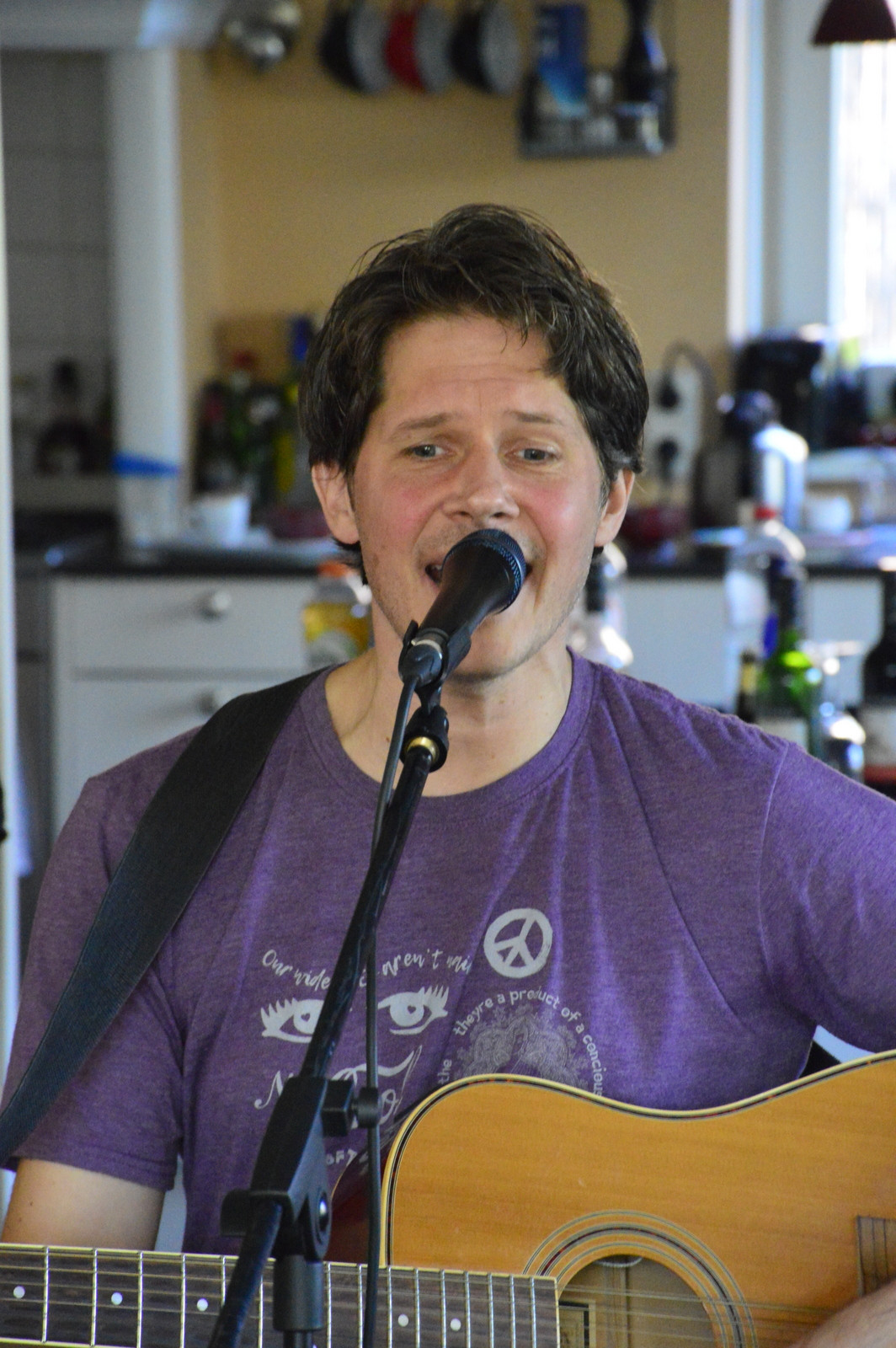 Brian de Graeve (Photo: Theo Verstrael) A fine glass of prosecco and a warm welcome by Erik and co-members Brian de Graeve (lead vocals and guitars), Daniel van der Weijde (guitars) and Rob van der Nieuwenhuijzen (drums and percussion) led me to the living room where a nice bunch of fans, family, friends and press were gathered. Bass player Jurjen Bergsma was absent due to sad personal circumstances. Former members drummer Jos Uffing and bass player Gerrit Jan Bloemink also joined the crowd who waited in anticipation for what was to come.

When everyone was settled and quite comfortable Brian took his acoustic guitar and Erik positioned himself behind the nice black piano. Erik started to play the extensive intro to Firth Of fifth to great enthusiasm of all present. But then of course he realized he was not about to play another "Symfo Classics" gig but a Silhouette acoustic set.

Brian took the microphone and explained that they felt they should first play Across The Rubicon, the title track of their third album, in memory of Hansi Cross, the boss of Progress Records. He was the first one in the music industry who believed in the band and he was also the one who suggested the idea to organize a release party. Sadly, he died of cancer this summer. Brian and Erik paid him a beautiful, emotional tribute. Then the new album was put into the CD player and we were all invited to listen.

While listening I had the opportunity to ask Brian, Erik and Daniel some questions regarding the album and the band.

Theo: First of all I'd like to know why this album was more a group effort than previous ones, as both Brian and Daniel indicated on the band's website? 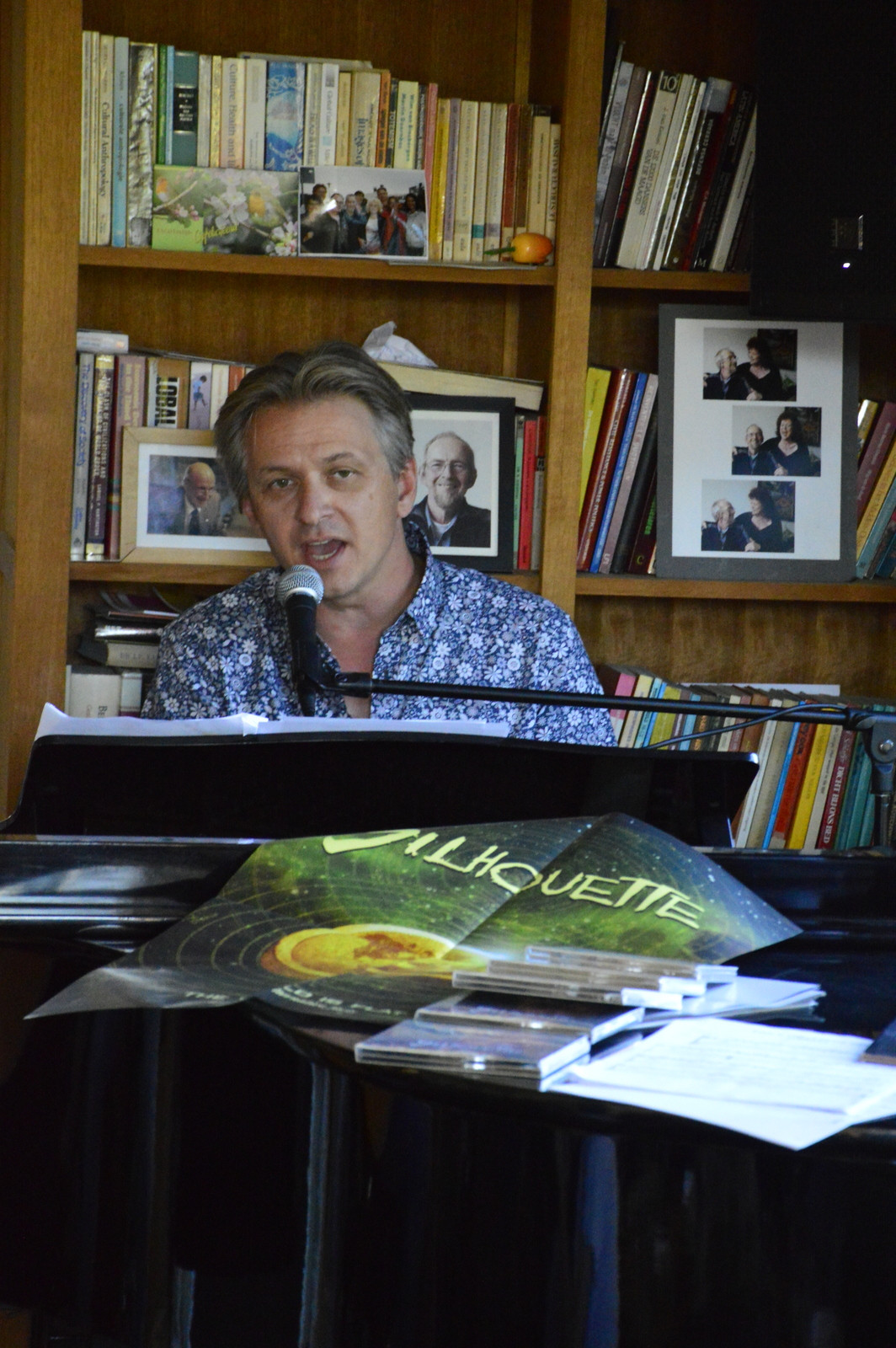 Erik Laan (Photo: Theo Verstrael) Brian: "Musically this new one is definitely more a group thing. Especially Daniel and Jurjen added their musical ideas into the making and recording process. Because he had just become a father Rob was less involved as he had more important things to do. And with more people involved in the writing and paying you get new things to try."

Erik: "I usually write down my ideas and send them around to the others. That worked well but this time we also got new ideas back, new arrangements but also new songs. That was really nice!"

Daniel: "Although we all love prog music we have of course our personal preferences that are quite wide apart. I for instance like the new Leprous album very much but the others really don't know what to do with that one. While they listen to things I cannot appreciate that much. In that way we have different attitude towards the music and therefore we tried some new things that worked out very well. There's for instance a real epic on the album clocking at almost 18 minutes, the longest song Silhouette has ever done. And it's simply great! The mixing and mastering have also improved considerably, thanks to Eriks son Bart. This is the first time I am fully satisfied with the end result!"

Looking at the individual songs, what were the inspiration sources for the lyrics? 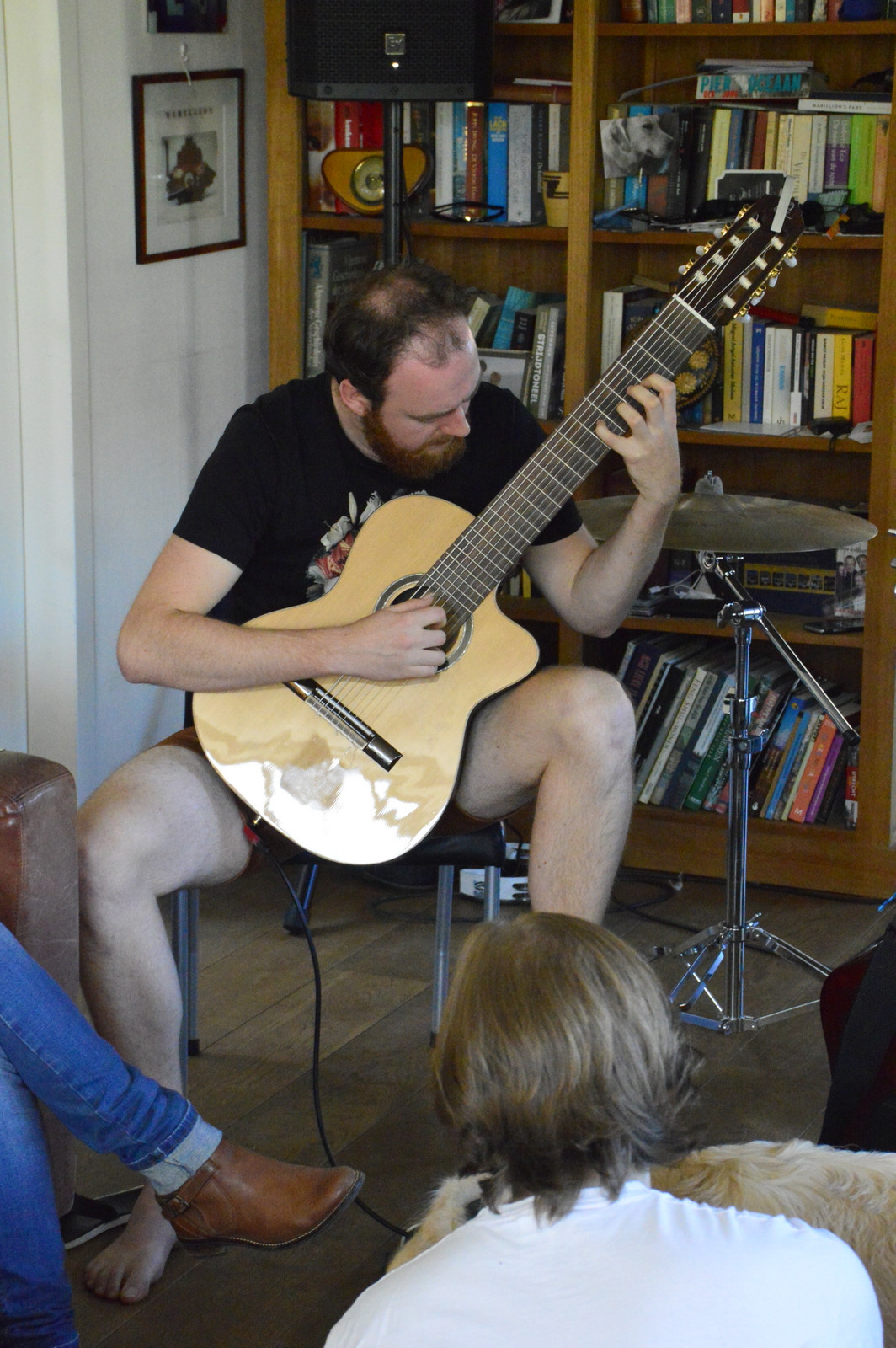 Brian: "This time we choose not to do a concept album as the former one but to record separate songs. Yet as you can already tell from the album title, my feeling that the world today is alas not a nice place to live in for many people, is leading in many of the lyrics. There is so much misunderstanding, so much disrespect, so much aggressiveness, even hatred and so little love! In the opening piece 'March peace' I express my concerns about these developments; why can't we all live in peace and respect each other?"

Daniel: "The instrumental piece I wrote is called Sakura which refers to the beautiful blooming of the Japanese cherry tree. I wanted to make a piece of music that has that same majestic feeling one has as you witness those pink blossomed trees all over the landscape. It starts off really small but it ends with a big major chord, expressing for me the blooming process and the enormity of the process behind".

Brian: "Six feet underground is a piece I had promised myself to write for a long time. It is based on the feeling that you have to live your life well for it will be over much too soon. Try to find and foremost give love before it is too late and you end up six feet underground. It is quite a personal thing. And it has absolutely nothing to do with the Caravan classic of almost the same title!".

Brian, you speak of an inspirations from renowned prog musicians while composing the final track Turn it off. Who was your inspirational source? 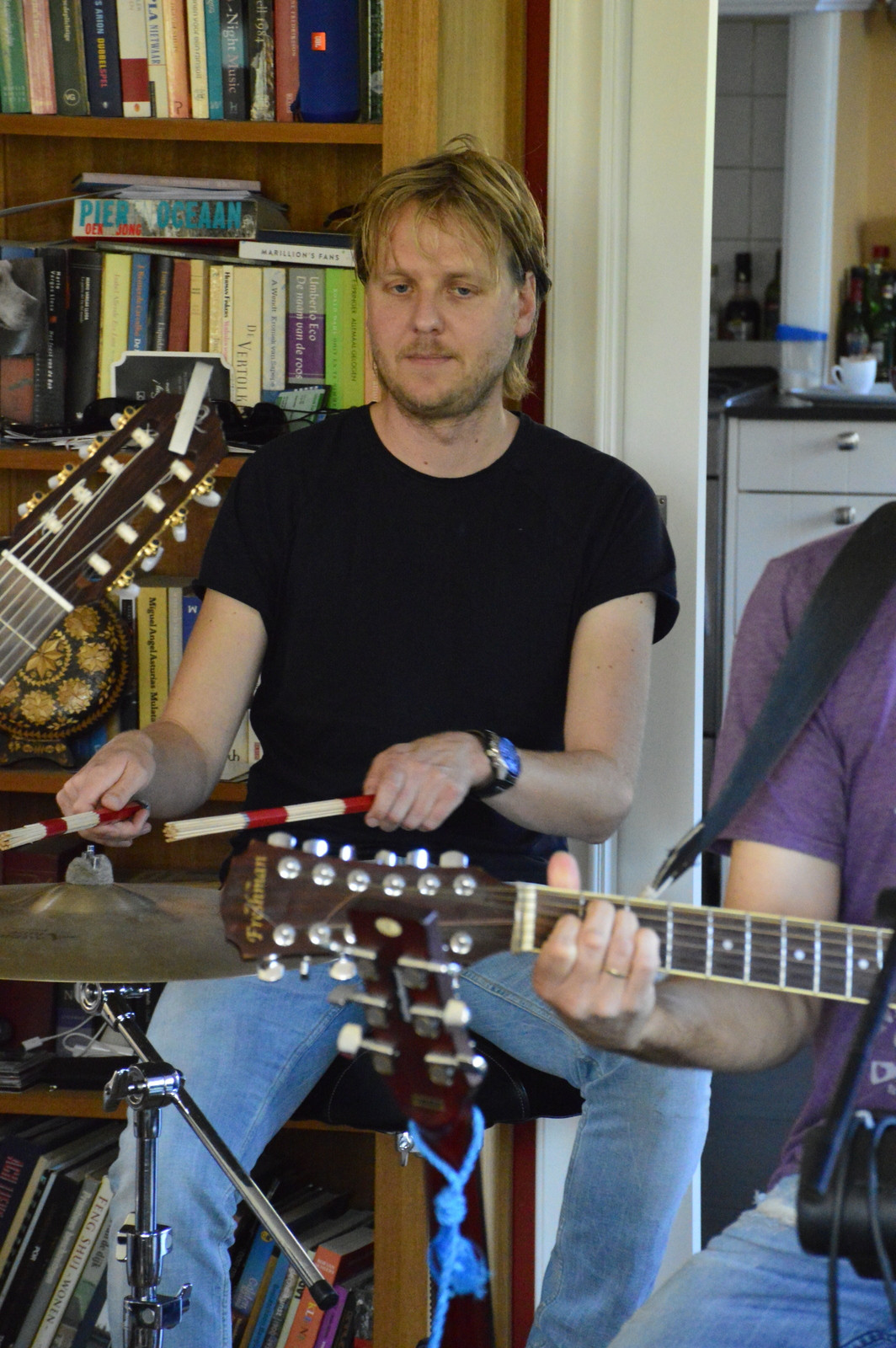 Rob van der Nieuwenhijzen (Photo: Theo Verstrael) Brian: "Actually, I would like everyone to find that out themselves. But as the inspiration is so obvious I think, there's no point in revealing it. For me Turn it off is directly inspired by Blood on the rooftops, one of my personal Genesis tracks. The acoustic guitar and the ballad-like melody remind me immediately of that great song. But maybe some listeners feel something completely different, that is absolutely fine. The most important thing is that they will enjoy the song as it is".

Erik, when will the album be successful for you?

Erik: "That's a difficult one to answer. Speaking for myself I get an enormous kick when I look into an audience, realise that I see a lot of faces I have never seen before but that all those unknown people came for us and sing along with our music! That is an experience I can't describe. Yet it is so hard nowadays to get the chance to take a new album to the road. In The Netherlands it is very hard to convince venues to contract us as we are not as renowned as bands like IQ or Pendragon. But also these bands can only play in one of two venues each time they visit our country. So what I really would like is that we get the chance to play ten or twenty venues, preferable also abroad, and that this album will make that possible. We are all full of ambition but we also feel frustrated sometimes that there is so little courage amongst venues to take a risk". 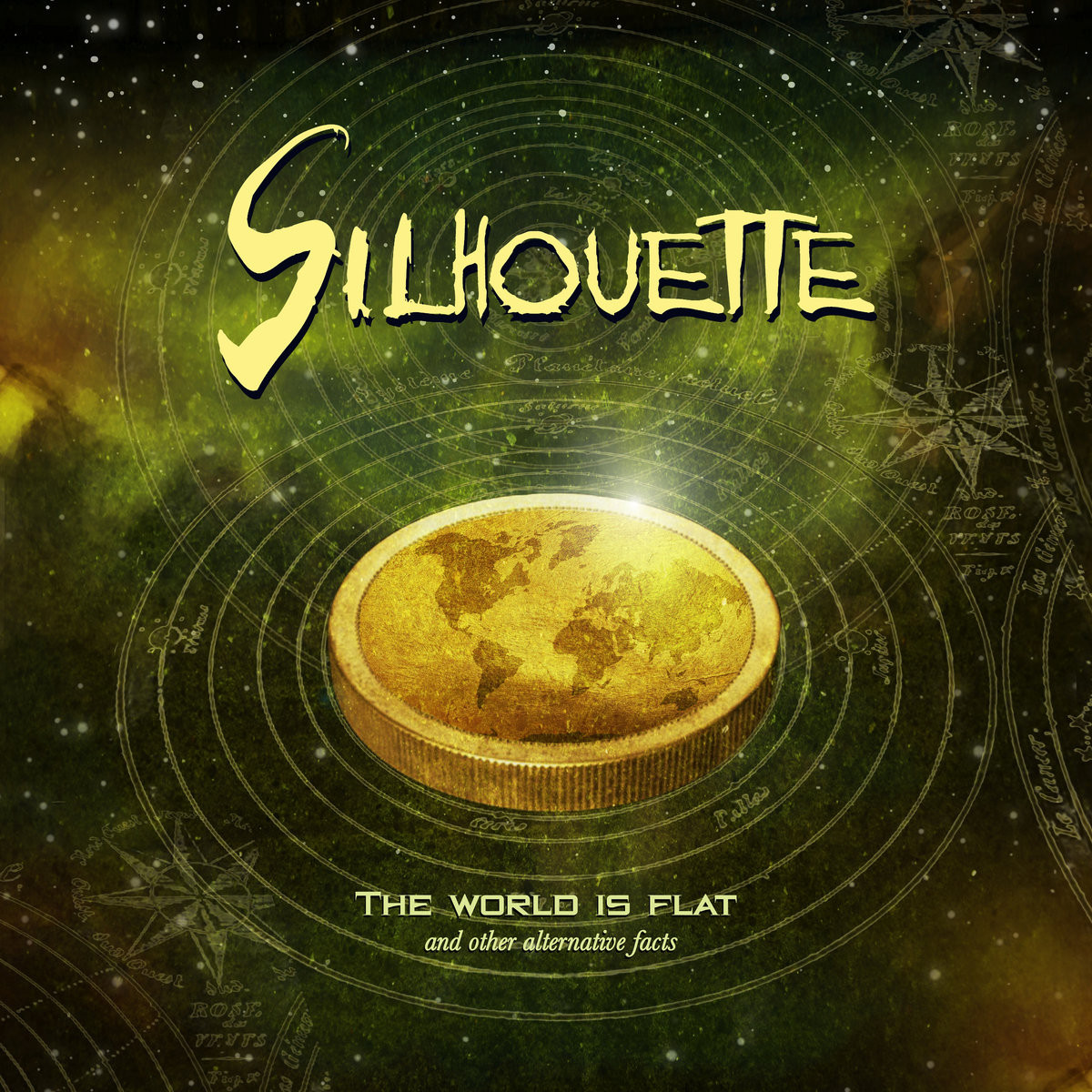 Silhouette - The Earth Is Flat And Other Alternative Facts - album cover

Meanwhile the album had been played and enjoyed. That was the moment for the band to take up their instruments and to treat us on a very nice, personal gig with songs from all five studio albums. Starting off with the opening track March Of Peace, we heard a couple of tracks from the new album including the complex instrumental Sakura played by Daniel on a 8-string (!) acoustic guitar, as well as live favourites Web Of Lies and When Snow Is Falling Down.

From their debut album The Maze, they played The World Is Gonna Get You and from the sophomore album Moods they played Second Time Down. The renditions were not flawless but that only added to the unique setting of this intimate gig. And the most important thing was to be part of the enthusiasm and the great vibe between the band members; they clearly enjoyed to play for us but foremost to play with each other.

After some three and a half hours this nice party came to an end. While driving home and listening to the new album, one dominant question kept tormenting my mind: "How on earth will I be able to write an independent and critical review of the new album after being treated to such a nice afternoon?"