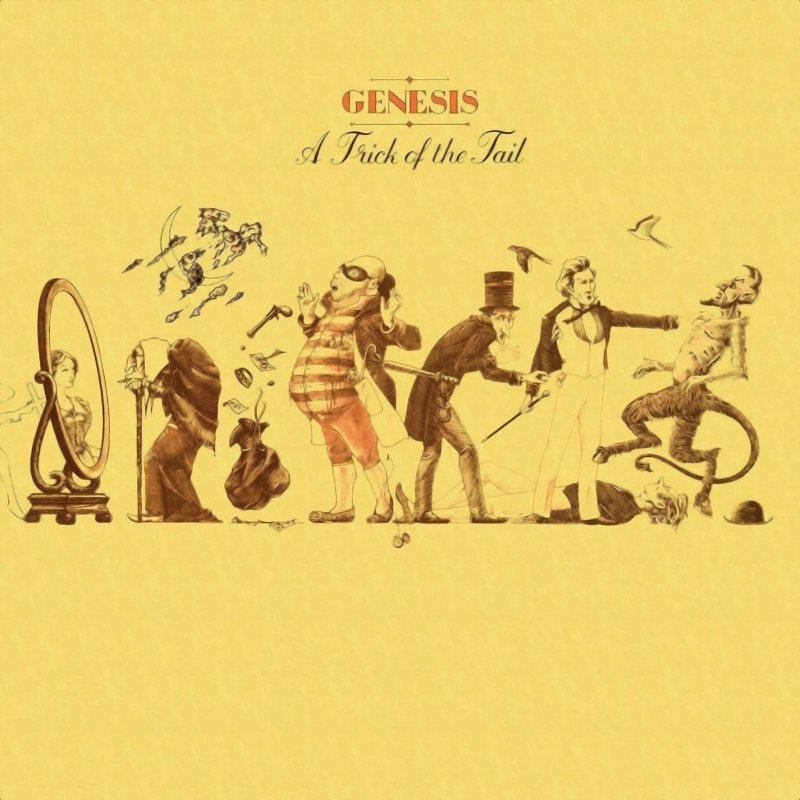 For some reason, The Lamb Lies Down On Broadway didn't do it for me at first. I borrowed the album from a friend who was very enthusiastic about it, played it over and over again and concluded then that I didn't like it: exit interest in Genesis. The fuss about Peter Gabriel leaving the band left me completely cold. I simply couldn't care less for I lost my interest in the band altogether, just cherished Foxtrot and Selling England By The Pound. Then one day, when visiting my local music store, I was attracted to a beautiful yellow album cover hanging on the wall. I asked the shop owner what it was and instead of answering me, he grabbed the record, put it on and grinned. He knew what was coming...

Seldom has an album opener sounded so seductive, so appealing, so enormously present as Mr. Banks' tingling keys and Mr. Hackett's chords in Dance On A Volcano. The sheer energy in that song emerging from those big speakers in that small shop took me totally in and has never left me ever since. Shivers all over the place and the song can still have that effect on me!

In that way I got to learn A Trick Of The Tail, which is, to me, simply one of the best albums ever made. The variation in moods and pace, the originality of the musical ideas, the beauty of the ballads Entangled and Mad Man Moon, the odd time signatures in Robbery, Assault and Battery and the sublime ending Los Endos in which several song themes reappear, are to me no less then awesome. The absolute highlight for me is Ripples, eight minutes of genial guitar work, subtle keys and bass accompanying the melodious vocals by new man on the microphone, Phil Collins. To me he immediately was a fantastic vocalist.

Needless to say I bought the album immediately, to great satisfaction of the shop owner who was a big fan also. A Trick Of The Tail made me listen again to Genesis, serving as the gate through which I had to go to fully appreciate their music. It also led me to the best concert I ever witnessed, Genesis in Rotterdam in 1977 during the tour that would be recorded for eternity on Seconds Out; although, it was also the company of a sweet girlfriend that surely contributed to my vivid memory. A Trick Of The Tail even managed to let me listen again to The Lamb, an album I now like very much. But although that double album is for many the best work by Genesis to date, for me it can't stand in the shadow of A Trick Of The Tail.

Find links to other Genesis reviews from the DPRP archive by following the links below: