In September, the young German prog rockers of Karakorum will release a new album. Their three-part Beteigeuze (German spelling for Betelgeuse) suite from their self-titled debut record will be released in a re-arranged and re-recorded version, and also for the first time on vinyl! Apart from that, they will play on this year's Burg Herzberg Festival on the Mental Stage. DPRP's Philipp Röttgers thought that it was high time to talk with their keyboardist and vocalist Axel Hackner about the album, the gig, and the future of this new generation of prog. 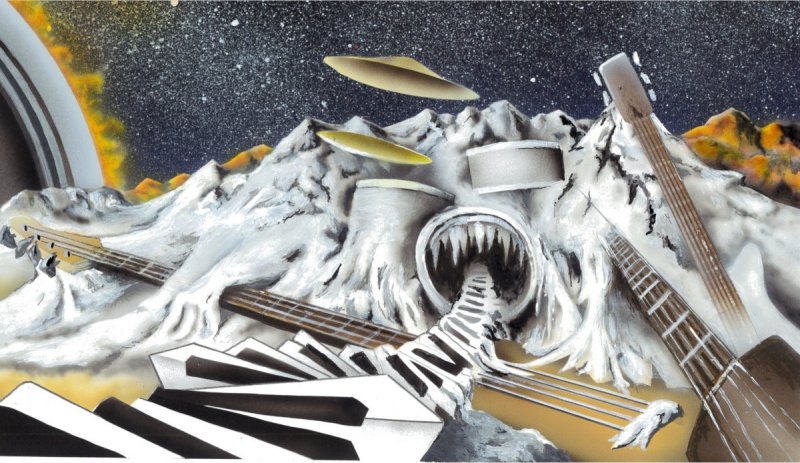 So, tell me a little about the band's history!

We partly know each other since we were kids in school and we somehow always played music together. Joni (bass player Jonas Kollenda) has played bass for ages, even double bass in an orchestra. He played everywhere and with everybody.

I know him and Max (guitarist Max Schörghuber) since school and we played in Foreign Faces, the band we were in prior to Karakorum. Our then-guitarist brought in drummer Basti (Bastian Schuhbeck) who was 14 at the time. We were like 18, 19, but he was the best musician of us. He plays every instrument: piano, lap steel guitar, and he studies music. He is the "musical director" in Karakorum.

So Karakorum developed out of Foreign Faces?

Exactly. Our second guitarist could not follow us musically anymore and then we saw Bernie (guitarist Bernhard Huber) on an Open Air concert with his band and we asked him if he wanted to join us. Personally we also totally clicked. He and I got drunk one night and had this idea to take all our money and travel to Asia. The next day he called me: "We were serious about this journey, weren't we?" "Yes." "Good. Because I just quit my job." So we travelled through Asia for seven months, met great people that we still keep in touch with, and when we came back we decided for a new musical beginning: Karakorum. We wanted to make music that was very weird and very complex.

Is your band name a reference to your trip to Asia?

It was exactly the well-known old story: We had a gig before us, but we did not have a name. We thought about "Zwackelmann", the magician from Räuber Hotzenplotz (a character from a children's book - ed.), but there already was a punk band by that name.

That would have been a fitting for you! But I also like Karakorum.

Which is why we chose it! It just sound good and if you are not too much into geography, you have no associations with that name. So there is no deeper meaning. We also thought about spelling it with a double Q.

And how does Karakorum work?

We have our HQ, our rehearsal room in the middle of nowhere in Bavaria. It is an old railway signal tower and there are only us and a Black Sabbath cover band. Is is quiet and we have a lovely scenery around. That has been our HQ for ten years now, since the days of Foreign Faces. Other people went to the disco, we met there and got drunk. The problem is that you do not meet as many girls as in discos and if you take some into this man-filled hole, they are scared off by the lack of hygiene and the fact that there is no running water. The toilet is the bush outside.

Seems to be typical for Prog bands!

Yes. Anyway, back on topic, everyone brings in his own ideas. There is less jamming, it is more that someone brings in a special musical idea, around which we jam and toy and on which we work. As mentioned, especially Basti improves the ideas, because he has the theoretical background. He writes down the harmonies and hands them around for everyone to sing. I am too dumb for harmonies, so I do the main vocals.

Do the vocal lines develop while the band plays?

Yes. But the lyrics come afterwards. It is a nice thing that all of us want to develop in the same musical direction. In Foreign Faces we also wrote our own music, but sometimes it was country, sometimes blues. It was all mixed up.

What about any musical influences? 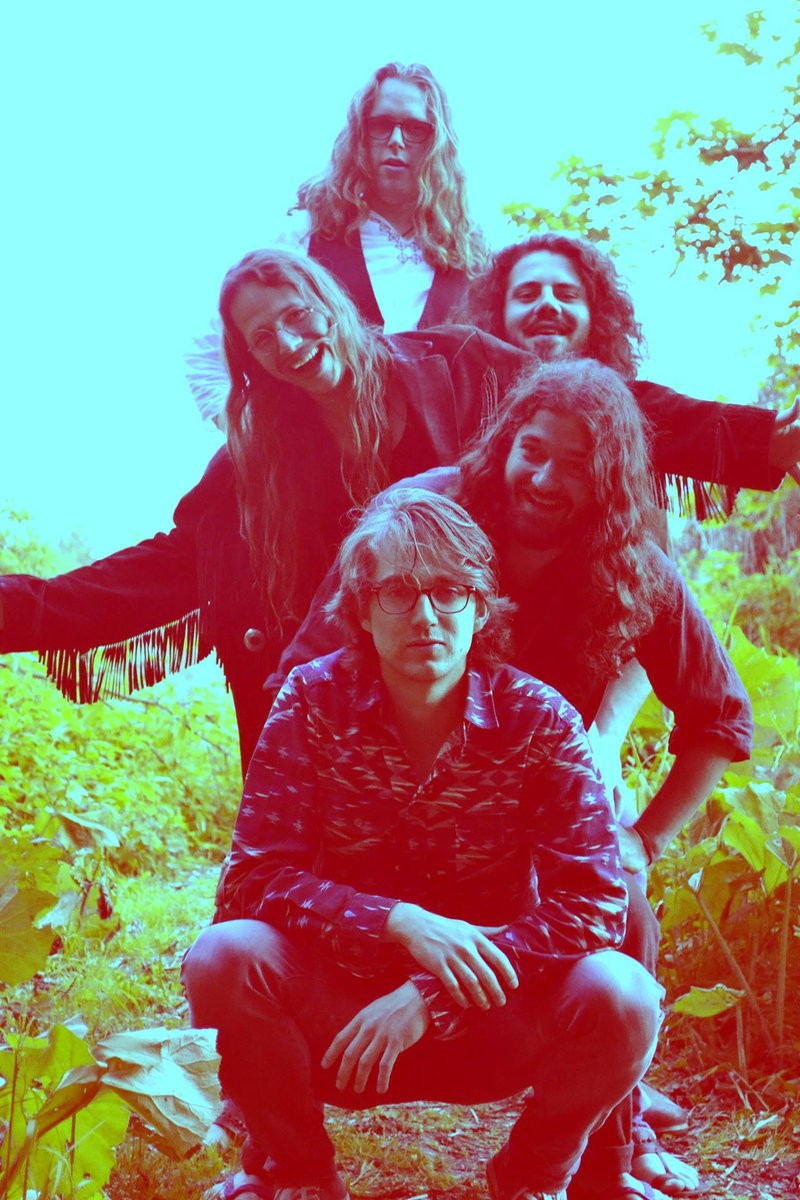 In the beginning were were heavily influenced by hard rock à la Deep Purple and Led Zeppelin, then came King Crimson. As a lover of progressive music you listen to everything and go into every direction. You always want something new. Then of course there was the influence of kraut rock, like Birth Control. Another heavy influence was Frank Zappa. I listened to his music for the first time when I was 16 and completely stoned in a friend's basement and we listened through his father's record collection. He is a huge fan of Zappa. Back then it was too much for me, but later it clicked. The last years we were also hugely influenced by jazz. And Bastian discovers so many things in his studies. He became very fond of the fugue. For Christmas he got a 180-CD collection of the works of Johann Sebastian Bach, including a heavy book as appendix.

One can hear the influences quite clearly on your first album. Tell me about it!

This started highly unprofessional. We recorded it in one day for YouTube. We were filmed by mobile phone cameras.

Looks good to me!

We thought so too! Bastian's uncle recorded the session. Then we mixed it in two nights and were more than happy about the result. We thought: "Hey, this could be our record!" And that was it. The feedback we got was a real suprise to us. It was mostly very positive and we got requests from international prog radio stations. Then someone played it to Dirk Raupach and he liked it and signed us to his label. Meanwhile the album itself is miles away from us and what we do today. It was recorded a little more than two years ago and it was released last year, but our songwriting has developed furhter since then.

You re-recorded the Beteigeuze trilogy.

Yes. It is the heart of the first album and we kept working on it for the last two years. We recorded the latest version on the 29th of October 2016. This time it is going to be released on vinyl. We wanted to do this with the first album already, but its lenght and the order of the songs made it difficult. Now with three longs songs it works.

Again recorded on one day!

Yup. Matthias Hoffmann, a 21 year old brilliant brass musician and a friend of us had listened to the first record and said that we could have a better sound. So we said "Okay" and this time he mixed the record. There are also some additional overdubs, espcially with the vocals, and our drummer used a vibraphone und marimba. It was much more professional. We recorded it with German rock legend Eroc (of Grobschnitt), which was a huge honour. The airbrush artwork comes again from Dennis Gockel, drummer of Knall. He also did the panorama cover for the first record, but now on vinyl it looks much better. For us a dream comes true: our first own vinyl!

What is the story, the concept, behind Beteigeuze?

There is this idea of Beteigeuze, this star, huge like 200 suns. In about 100.000 years it is going to implode, there will be one hell of a supernova. Its light will reach Earth 10.000 years later. We put this in a story, an apocalyptical scenario with fantasy elements. The idea comes from the time of Foreign Faces. Beteigeuze was also an option for a band name, also just because of its sound.

I can say that the songs sound much better on the new album! When will be the release?

On the 22nd of September. Before that we play at the Burg Herzberg Festival, another dream that comes true for us. We come there since 2008. I wanted to go in 2007, but we got our school certificates, and my mother did not let me. Birth Control and Uriah Heep played, bands I always wanted to see!

Apart from the record and the gig, what are Karakorums plans for the future?

We regularly write music. In the beginning it was just fun, now it has also this taste of working. We became more productive and more professional. We already play new songs live. Smegmahood is one of those, and it represents us best. Lyrically there are only four lines about a rat having oral sex while suffering from lactose intolerance. This is delivered as a fugue with five voices. There comes the influence of Zappa. Musically it is our most compex piece, you can hear some Gentle Giant in there. Hints of the song can be found on the new album's cover. There are many things on there that only we or our friends understand. That is the fun about it. Apart from that we would like to tour and we think about the concept for our next record. We think about going away to a quiet hidden place, maybe a vineyard, just we as a band and everyone else involved in the making of the record. That would be an awesome atmosphere to work in! 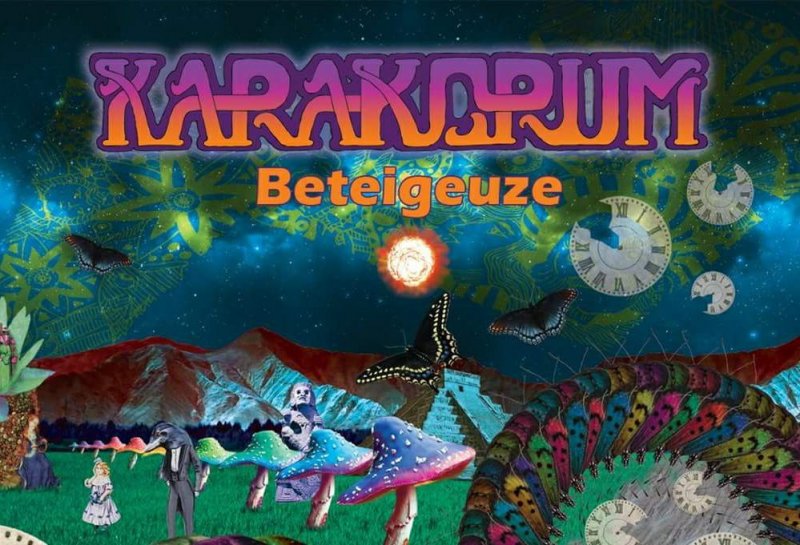 Karakorum's new album Beteigeuze will be released on the 22 September 2017.