A common error or perception made by fans of progressive rock is the fact that many times one tends to limit this musical genre to Europe and America. However this musical style, as do most, knows no boundaries and nearly every country could boast of an exponent from their musical scene who has contributed to this particular genre. The Middle East also has a progressive rock scene and possibly one of the major exponents from that geographical location from the seventies would be Israeli band, Zingale.

Pronounced as Tsingaleh, the band have their origins in the early seventies with only one release to their credit. Some people attribute the band name to the slang word for "joint", though the band insist that it actually is derived from the word sing. The band was created by David Bachar and Yonathan "Johnny" Stern, though the band leader was bassist Udi Tamir who could be considered the creative force within the band. The lineup was further augmented by the arrival of drummer David Shanan, guitarist Efrayim Barak and as mentioned above, bassist Udi Tamir.

For the first two years of the group's history, the band rehearsed continuously as mew music was being written down. Only after 2 years did the band feel confident enough to try and make a break for it organising two concerts as well as finding themselves a music producer.

Following this the band entered Kolinor Studdios, led by sound man Dudi Rozenthal and started to lay down their first recordings. Initially the band was trying to record music based on and English pop style, yet despite positive reviews the band soon realised that there was no such market for this type of music in Israel. These tracks were made available on the CD reissue of the album and they are Why I Didn't Win The Lottery and Everything Will Be OK. 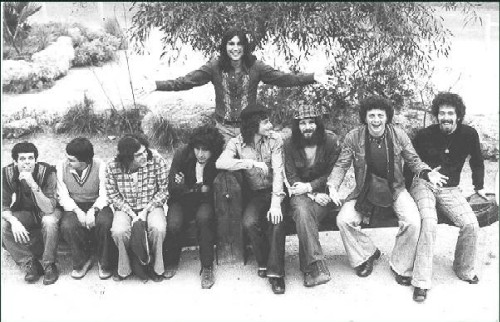 Upon realising that there was no place for their music in Israel, the band decided to do a u-turn and change musical direction. The result would be the first case of Israeli progressive rock music with the main influences being bands such as Van Der Graaf Generator and more importantly, Gentle Giant. For this to come about the band recruited two new members, keyboardist Ady Weiss and English violinist Tony Brower, who would lend to the Gentle Giant sound that the band would come to perfect. 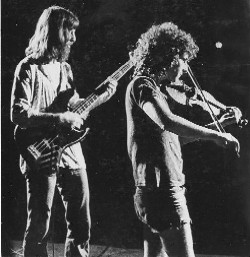 Thus the band set out to record their first album and by the end of 1975, they had managed to finish their recordings. Most of the inspirations for the music came from the 1974 Yom Kippur war, whose overtones can be heard throughout most of the album tracks. Furthermore the band's future seemed to be promising as the president of Decca Records was a personal friend of Zingale's producer Yaacov Bachar and through him they managed to get a European tour sponsored as well as the possibility of a recording contract and distribution via the label. However, just when everything seemed to be going along fine, the Decca president had a heart attack and all plans had to be shelved.

By 1976/1977 the band had once again decided to pursue a new musical direction and started work on new Hebrew material, after having been signed up by the Hataklit label in Israel. The fruits of their 76/77 "Hebrew" recordings are also found on the CD reissue as Genesis, Good To Be Together, Party Inside and Green Scooter On The Way To Asia. These recordings were only released as a promotional package to various radio stations. 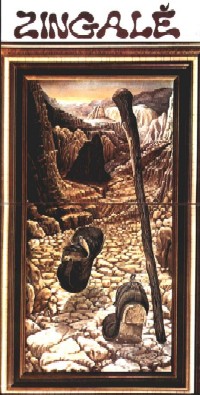 In 1977, the band's debut album, titled Peace, was finally released in a limited edition, making it one of progressive rock's more valuable collector's items, though the band split up soon after the album release due to differences over musical direction and the recordings and mixes of the Hebrew album, which in turn was never finished.

Stern and Tamir went on to pursue Judaism and became ultra-orthodox.
Efrayim Barak has a recording studio in the Galil and, together with his wife, runs a guesthouse.
Brower moved to NYC where he has been living for more than 20 years, and makes music as a hobby.
David Shanan turned into a bee-keeper while David Bachar has passed away recently.

In 1992 the Israeli label "Jazz Ba'ozen" issued a remaster of the original PEACE album and included the Hebrew pieces as bonus tracks. Unfortunately,as happened with the album, the CD was only released in a limited edition with just a total of 750 copies being pressed. The album hasn't been reissued since.

Having said all that one can still find MP3 samples of the band's music on the internet with the only Zingale Site to my knowledge offering a few samples, apparently with the band's permission.

The debut and only album from Zingale is indeed a rarity, both in vinyl as well as in its CD version. The CD was only released as a limited edition of 750 copies, though there exists a website (see Related Websites) that has MP3 samples from the album, with all samples being placed on the site with consent from band members.

There are 2 distinct vinyl versions of the album, both of which have different track listings. The first was a promotional copy and this is the format utilised for the CD re-issue. The commercially released vinyl version was re-arranged for commercial reasons into the form of 2 long suites. The promotional version also had a a longer version of Carnival (by about 30 seconds), something which was maintained for the CD version.
Tracks 1 - 9 are digital transfers from the original master tapes. The bonus tracks (Tracks 10-15) were never released commercially but only available as promo DJ singles. For tracks 10-13, only one copy of each track was found and this not even a master tape, but rather a promotional DJ vinyl copy. Tracks 14-15 are from the original masters.

From the opening number, Heroica, one can notice the string Canterbury influence that the band possessed. First of all there is that strong dominant violin sound that really gives the band a distinctive touch, though they do not betray their Middle Eastern roots as they tend to fellow a European or Western approach in structuring their music. Only in the second track, Help This Lonely World do we get to hear the lead vocals, and here the band really cement their resemblance to Caravan as the vocals are extremely soft and plaintive though the music still manages to convey a strange powerful feeling.

Another band that one tends to think of when hearing Zingale, would obviously be Gentle Giant. This mainly occurs due to the strong violin presence, though the band do not tend to fall into the quirky nature that GG loved to include on their albums. In fact ere it not for the violin, another main influence of the band would be legendary band Yes, specially when one hears how the band structure their vocal harmonies. Tracks such as Love Song further enhance such a comparison, though one must also add that one element the band tend to lack is a virtuoso musician who could carry their music to a different level.

Not all tracks are as straight forward as Help This Lonely World, as pieces such as Carnival bring out the jazzier side of the band as the beat definitely picks up allowing for various interchanges between violin, guitar and keyboards. The underlying beat seems to be driven by a funky bass as the other instruments indulge in playing their hearts out. Stampede, is another jazz influenced instrumental. which as its name implies moves along at a rhythmic pace. Experimentation is also a feature of the band as they make use of back tracking on One Minute Prayer, a track that sounds as if it is the first use of Jewish traditional music, though played backwards!

At times the band also introduces a degree of melancholy, such as the acoustic guitar and violin piece, 7 Flowers Street. Furthermore it seems that the war scenario and the constant threat of terrorism within their home country was a dominant factor in their music writing. At times the titles of the tracks directly refer to this particular subject as happens on Lonely Violin Crying For Peace and Soon the War Is Over. Soon the War Is Over was originally the closing track to the only album the band released. Musically this track features a number of interesting features, though unfortunately the vocals are somewhat disappointing and strained as it gathers all the influences that the band had from Gentle Giant to Yes to Caravan.

The remaining tracks did not feature on the original album that the band had released and also show the band in a different musical light. Furthermore vocals are sung in Hebrew rather than English, as happened on the album, a sign that the band had shifted their target audience.

Why I Didn't Win The Lottery and Everything Will Be OKwere the first tracks that the band had laid down before augmenting their line-up to that which would record the Peace album. Possibly the most notable musical absence from these tracks and those on the original album is the sound of Tony Brower's violin as the music can be best described as a seventies pop-rock with influences from bands such as The Beatles as well as artists such as Dave Mason.

The final tracks Genesis, Good To Be Together, Party Inside and Green Scooter On The Way To Asia were recorded after the band had released the Peace album. In fact the band had changed lineup as well as had resorted to singing in Hebrew, a sign that they had once again shifted their target audience. There are occasional traits of the progressive rock that influenced them so greatly, though this had been diluted. Occasionally one notices a shift in time signature as well as the odd musical reference to artists such as Gentle Giant. However the band seemed to be concentrating more in creating pop hooks rather than relying on their musicianship to do the talking. Another added feature that contrasts sharply with the sound that the band possessed just a few months earlier is that of the heavy distortion that is applied to their guitars, something that never occurred on Peace. Of these four racks, the standout piece is Green Scooter On the Way To Asia which has the band playing acoustically and almost reaching the heights that they had on Peace.

Calling the only album Zingale ever released a classic would be stretching things too far. However, the band crated an album which had a variety of interesting numbers, especially for those progressive rock fans who like to hear the violin as a solo instrument within a rock ensemble. On the other hand this album is of immense historical importance as it shows how the influences of classical progressive rock bands reached all corners of the earth, causing the popularisation of a style and influencing the musical appetite of more than just a generation of youths.