Another band from the mid-seventies that for some reason did not make it into the big league was jazz-fusion/progressive rock band Aurora. The main musicians within the band were founder members Mark Menikos and Skip SoRelle. Mark Menikos had been playing violin from the age of nine and thus his musical mentors were themselves violinists, however not classical violinists but rather masters like Stéphane Grapelli and Jean-Luc Ponty. Sorelle's influence, on the other hand, lay in musicians like John Coltrane, Chick Corea and Larry Coryell.

When the two met up, both were playing in two different bands. Sorelle was in jazz-folk band High Time Octet, while SoRelle was playing with seminal Texas psychedelic rock group Shiva's Headband, yet both were becoming increasingly disenchanted with the musical path they were following. After a meeting in which SoRelle was invited by Menikos to play some Zappa and Mahavishnu Orchestra transcriptions that he had just completed, the two hit it off and decided to embark on their own musical venture.

Thus Aurora was formed in 1976 with the further addition of bassist Roy Vogt, keyboardist John Sharp and drummer Martin Metzger. The band was named after the Jean-Luc Ponty album by the same name. As the group started playing gigs around the Texas area, they would base much of their cover versions on bands such as John McLaughlin and Jean-Luc Ponty, because of similar instrumentation between these musicians and their band. However the band was also composing its own material and gaining wider recognition.

This led to the band also recording a radio broadcast for radio station KZEW's "Homegrown" show as well as laying down three tracks at January Sound Studios in Dallas, financed by a loan from a doctor friend's of SoRelle. All these tracks are what is available by the band and they were featured on their one and only album (reviewed below) available till now. 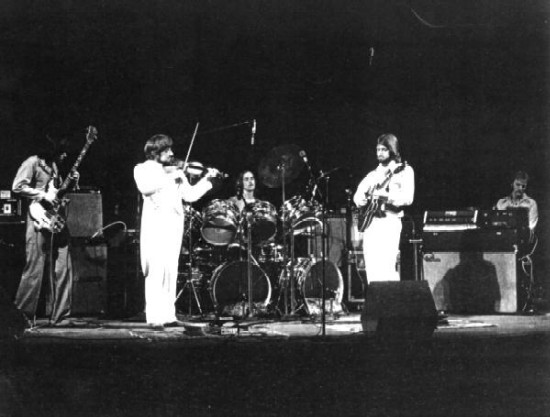 One of the highlights of the Aurora career was their playing for the opening of the newly refurbished Granada Theatre in Dallas in the spring of 1977, a performance which also led them to clinching support slot with Larry Coryell. Further support slots came the band's way for musicians such as bassist Miroslav Vitous (Weather Report) and drummer Alphonse Musón. The band seemed to be growing both in popularity as well in musical stature, but as oft happens musical differences were causing a rift within the ranks. In the fall of 1977 John Sharp and Mark Menikos left the band as they wanted a more showman-like approach with costumes and lights. For a while this seemed to spell the end of the band, yet SoRelle reformed the band with bassist Bruce Tate, drummer Rolando Garcia and the seemingly repentant John Sharp.

This lie-up did get a few gigs going and even supported musicians as Dexter Gordon and Larry Coryell (again), though they only lasted a few months. The final incarnation of Aurora was put together in the fall of 1978 with SoRelle and Tate together with drummer Frank Davis and keyboardist Bill Howard. This final line-up was the most successful of all incarnations in terms of number of gigs, yet it lacked the improvisational nature and flair that characterised the original Aurora. In January 1980 SoRelle left for Nashville and definitely broke up the band.

Today, Mark Menikos works for the US Postal Service and plays with Celtic-Fusion group Brothers 3 together with original Aurora drummer Martin Metzger. Around 1985, Mark met the members of the Dallas-based progressive rock band Prism. He later joined a newly-reorganized version of the group that was named Hands. Reminiscent of Gentle Giant, early Kansas, and Genesis, Hands had a profound impact on the local music scene and their past works as well as new material are available from Shroom Productions
Apart form his work with Brothers 3, Martin Metzger, who changed his surname to McCall in honour of one of his stepfathers, has also received acclaim as a session musician with artists such as Marc O'Connor and Sara Hickman. He also has his own space rock band called I Am as well as personal projects such as Kobushoi, a Japanese Taiko drum troupe.
Roy Vogt was the staff bassist on Channel 4 magazine (WSMV-NBC) from 1983-1987 and has taught at Belmont University since 1983. He is also involved in the new Nashville Bass Institute.
John Sharp sadly passed away after a lengthy battle with liver disease.
Skip SoRelle now lives in Maryland and owns a television and film audio post production business called Aurora Productions.

Onto this impressive jazz/progressive rock album which can be subdivided into two sections, those tracks (1-3) that were recorded in the studio and those that were recorded live for a radio broadcast (Tracks 4-10). Having said that, this is indeed just a technicality as the band manage to pull it off impressively when playing live and very little of difference is noted between these two sections. What does surface is the different styles that different composers within the band possessed

The album opens with Opus 8, which firmly stamps out the defining influences that Mark Menikos had as well as the idols he was trying to emulate when playing. Thus one must also realise that the dominant instrument on this particular track is the violin, and indeed those that have the hand of Menikos, are well within the Jean Luc Ponty musical field. Other tracks that feature the pen of Menikos are Off-Blue, Khartouhm and Jubilee. Furthermore Menikos also manages to pay tribute to his mentor by presenting an excellent rendition of the Ponty track, Polyfolk Dance. Having said that, these tracks are not just all violin, and ample space is given to solos from all instruments in the band, made most evident on the opening Opus 8. Special mention should be made of Khartouhm which is strikingly different to what the band showcase on the rest of the album. Instead of the pacey fusion we get a psychedelic drenched atmospheric piece of music replete with spacey swirling keyboard work that envelopes the violin licks. The closing Jubilee, on the other hand, has the band playing out a very traditional style of jazz-rock much like similar styled seventies bands such as Passport and Nucleus were doing.

John Sharp contributes 2 tracks to the album, Within and Eurhythmia. Within follows hot on the heels of Opus 8 and shows the band in a very different limelight. As can be expected the keyboards play a dominant role, though the music itself suddenly becomes rather more accessible and palatable, rather similar to a keyboard version of Pat Methney. On the other hand, Eurythmia includes everything that a progressive rock fan would want to hear in his music. The rhythm is continuously varying as solos are interchanged between various instruments while the rhythm section is constantly varying the rhythm and time signature.

Skip SoRelle's contributions to the album include Dancing On A Plain In Spain and Savage Lust. Funnily enough, it seems that Roy Vogt's bass playing come to the fore on these compositions as he manages to hold his own with some great playing. The fusion elements are rife here with references constantly made to musicians such as Al Di Meola and Jan Hammer, as well as the more established musicians such as Larry Coryell and Chick Corea. Possibly since they are penned by a guitarist these tracks are also the most powerful of the tracks on the album with some killer power chords played by both violin and guitar giving an uncharacteristic hard sound to the music of Aurora.

Once again Shroom Productions have managed to unearth a treasure of an album that is bound to please any fusion loving progressive rock fan. This album only serves further to show that the defining line between certain elements of jazz and progressive rock are very fine and at times almost undiscernible.

The main source of information for Aurora material would be the Shroom Productions Website which is in charge of the recovering and release of this classical material.

Should you have any further information regarding Aurora that could be added to the site, do not hesitate to contact me.