The world is starting to get back to normal, bands get a chance to go back on stage. Perfect Storm and Seb Zukini played the EM2 in Groningen in the north of the Netherlands. Jan Buddenberg reports, with photos by Eddy Taatgen. 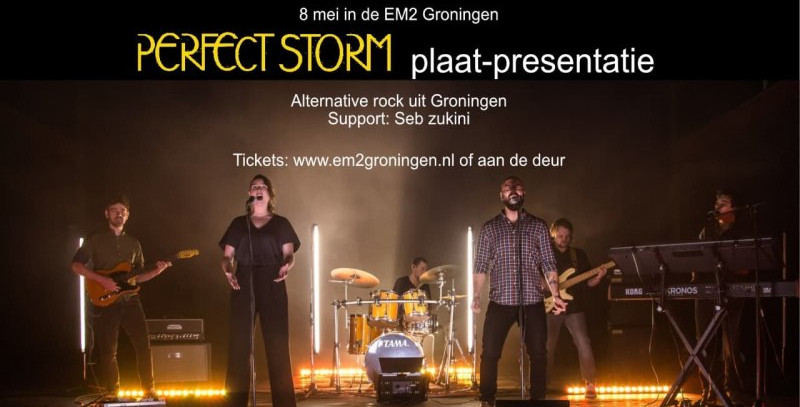 One of the albums that left me breathless in 2021 is Perfect Storm's debut album No Air, assuringly making it to the top ranks of my year-list for 2022. An equally fine experience was their debuting headline act at the 'Northern Prog Festival' in Siegerswoude on November 6th, 2021, alongside Leap Day, Hackberry and Hangover Paradise. That concert opportunity I simply had to seize, having almost gone cold turkey on concerts during the various Covid lockdown situations in our country. It proved to be an excellent evening where the band played their album front to back and extended it with a revisit of their opening song for good measure.

The next moment to see the band (hailing from Groningen) was at the Progdreams festival in Zoetermeer on March 26th of this year. As luck would have it I couldn't attend this festival being occupied in whisky tastings at De Suikerfabriek in Groningen, a location directly opposite to tonight's venue EM2 of all places... In hindsight, a positive effect for I instantly knew finding a parking spot wouldn't prove too much of a problem. With Gert-Jan Schurer, guitarist of the band, mentioning the place being renowned for its pizzas, my hunger would be sufficiently cared for this evening as well.

So after other obligations in light of Mothers' Day, it was midway through the day I started my journey to the lovely destination of Groningen, a place ornamented with delightful memories although this can't be stated for the rather one-sided two-hour enduring non-scenic drive towards this bustling city.

At the first sight of the Martini tower this changes. A few moments later the sugar factory smiled at me once again. While exchanging gifts, I joined the pizza party. The next couple of hours were passed by catching up on future projects, talking to keyboardist Ard Offers' involvement in Galaxy and sharing a moment with vocalist Adel Saflou's on his upcoming Ambrotype releases. Not much later, local Orinoco Radio DJ Ard Offers welcomed a gathering of 100+ attendees of friends, family and fans, and support act Seb Zukini stepped onto the stage.

Or better said, stepped into the stage, for it turned out to be a four by four square lowered into the ground, which in all my years of attending concerts was a first. If Seb Zukini's performance is to be seen as a gauging moment whether this works then the needle strikes firmly towards the affirmative side for the band turned a sunny Sunday night instantly into a hot Saturday Night! Sharing a likeness in sound and attitude towards Herman Brood And His Wild Romance, mixing alternative rock with punk influences, their opening song Socialist set off their performance brilliantly, followed by their current single Lord Lord. 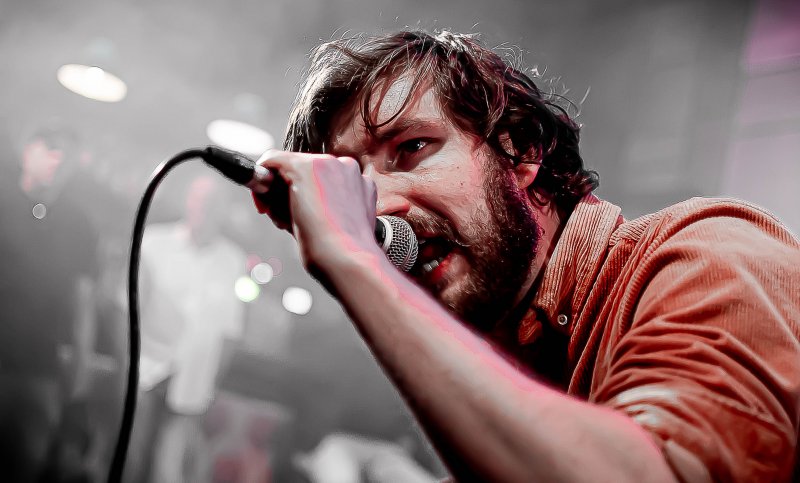 These first few tracks brimmed with a wonder-wall of energy erected by the band's enthusiastic guitarists Herman Klompmakers and Martin van Loon, both of them blistering off a variety of riffs while wearing large smiles on their faces. Next to their forceful backing vocals, Klompmakers occasionally sidestepped towards his keyboard in Lord Lord, which later on in the set (Mirror, Reap What You Sow) led to some surprising psychedelic notes. A nice diversion in their sound that gives their concise and well-constructed, almost explosive, compositions a nice 'proggy-ish' New Wave appeal with flashes of Ian Dury.

Together with the tightly operating rhythmic tandem of powerhouse drummer Robert-Jan Zigterman and bassist Ruben Lennaerts, the musical image that emerged after the first two songs quickly became that of Oasis. First, through the engaging melodies which shares the memorable Beatles-que sound, but second and perhaps more importantly, through vocalist Sebastiaan Kusters, whose voice showed strong expressive resemblances to Liam Gallagher.

This also applies towards his stage presence in which he alternated distancing stoic performances with piercing looks into the audience. Adding some nice guitar elements in Reap What You Sow, the band's first single, his presence, as well as the band's undeniable passion and chemistry, made their entire show a captivating experience. 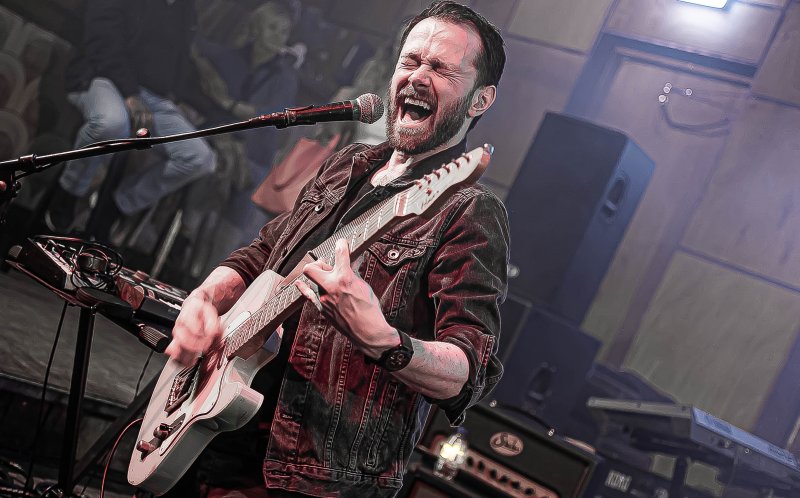 Their strong set was closed with the slow brooding blues of Slow Seb. But not before the young ones (the band recently celebrated their first year of existence) fired off multiple rounds of Sex Pistols punk with an unleashed Kusters voicing his inner Johnny Rotten rebel in the mightily aggressive Red Blood. A memorable moment within their set which proverbially brought the house down.

By the looks and ears of their performance today, Seb Zukini will soon be in need of a bigger stage. Their whirlwind set went down like a storm and proved to be a perfect intro for the one that was to follow after the short intermission. 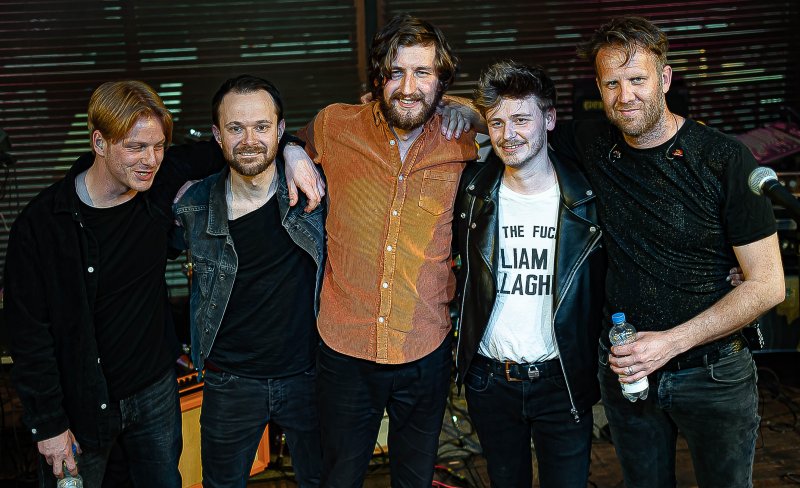 Greeted warmly by the biggest crowd in their short live history, Perfect Storm kicked off with The Search, one of their more pop orientated compositions. Although probably not as strong an opener as Strength, the official video of which was actually recorded in a different area here at EM2, it got their set firmly on their way, while some minor sound adjustments were administered by EM2's sound technician. The band, smiling even more than their support act, looked ready and willing to make it a night to remember and after some sound tweaks it became one. Balance of sound was neigh on perfect and individual instruments could be picked up easily. The vocals by Saflou and Hiske Oosterwijk were clearly audible in the mix, which in light of their excellent vocal capabilities is a definite pro. 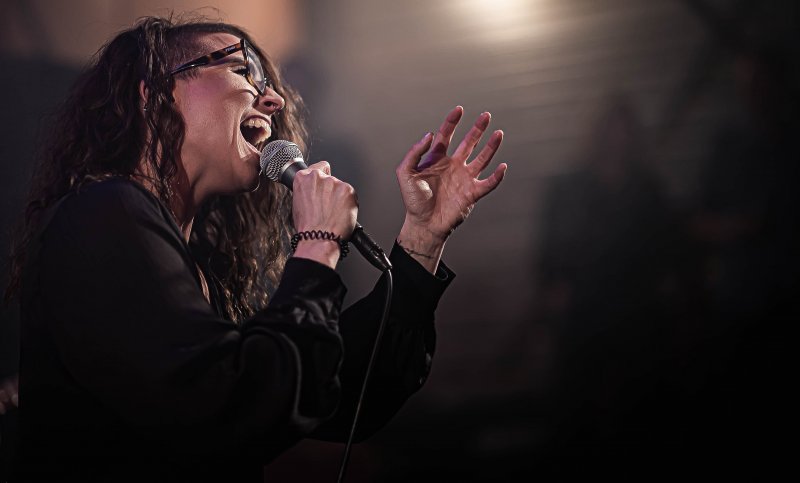 With Ard Offers welcoming the audience for the 'longest prolonged release party ever' (something Armed Cloud would beg to differ), the band continued without delay with one of the albums unforgettable highlights Hope. This song turned out to be very memorable both on and off-stage, as David Klompmakers' leads were short-fusing and caused some stressful moments for the sound technician.

In the song's natural stream of delightful sensitive pop melodies, both Oosterwijk and Saflou showed to be able to transmit the intimate emotions and frustrating anger as captured on the album most brilliantly. With Saflou's mimic giving the song a lot of emphasizing expressiveness, followed by beautifully matching powerful harmonies and an impressive majestic solo from Schurer, the band soared convincingly through the song with warmth, feel and musical excellence. 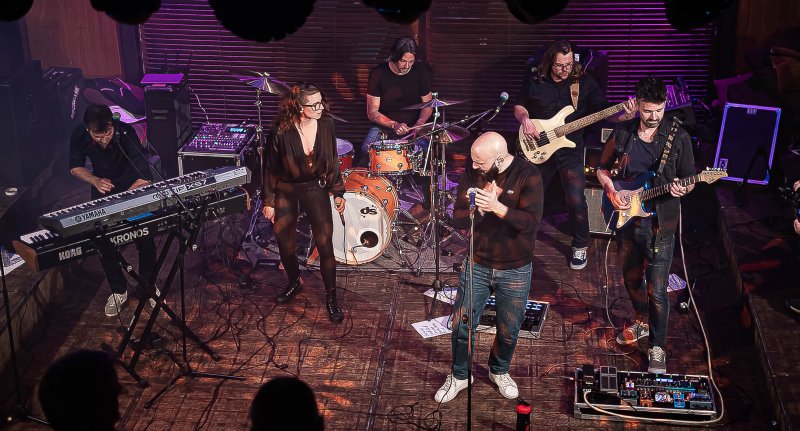 In the subsequent Sun For Life, the band's dedicated drummer Niels Voskuil (producer of the album and the perfect live replacement for the otherwise occupied Jesse Bosman) kept the pace of the song firmly in grip. With Schurer perfectly recreating his warm guitar sound and Offers working his magic with some fine synth escapades, it didn't take look for that luscious Rush and Saga feel to appear which makes this song so simply irresistible. Throughout the song, one could notice that beautiful vocal interaction between Oosterwijk and Saflou again. They are blending their strong individual performances beautifully during the sublime harmonies. This is one of the strengths of the band.

Mind's Eye adds a delightful jazzy touch and some excellently performed rock, with Schurer delivering his a-game, while Offers' keys were disappearing slightly in the mix here. It was time for the reflective serene calming eye in Perfect Storm's set with No Air, preceded by a short lyric outline from Oosterwijk.

Dreamy melodies transform the energy levels, as they are thriving from Oosterwijk's smooth vocals and Offers' gracious piano play. No Air's beautiful intricate bridge, with Oosterwijk's breathtaking vocals, brought shivers down many a spine in the audience. This touching song perfectly shows the growth in chemistry of the band. A standing ovation (well, impossible not to, as there was almost no way of sitting down), reassuringly befell upon them. 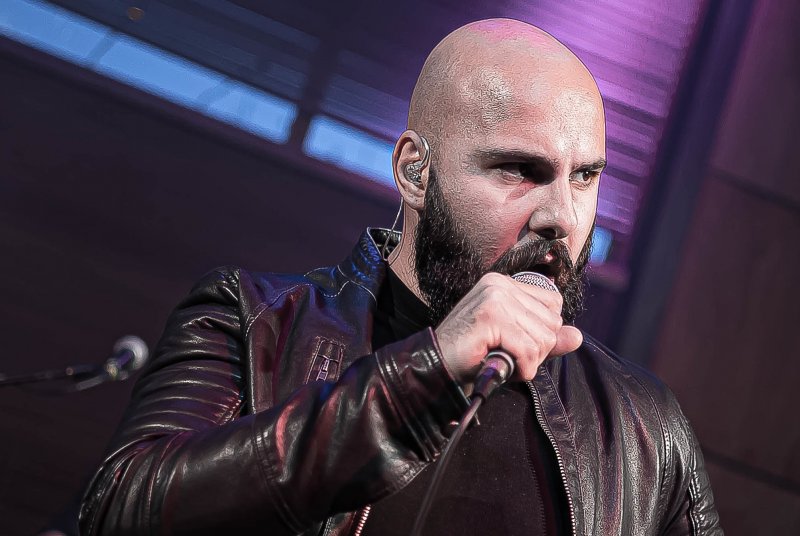 The penultimate Strength instantly recaptured the dynamic setting from before No Air. With ever-growing smiles, the band gave a flawless rendition, much to the delight of all. Not the least to Oosterwijk and Saflou themselves, who, during the instrumental passage of the song, shortly stepped off-stage, each living in their own elements of joy. Oosterwijk danced enthusiastically on the smallest of edges near the stage. Saflou simply gazed at his fellow band members seated on the edge. He actually got so caught up in the music he almost forgot there was still some of his vocals needed to end the song. Making it in the nick of time the song ended on a high.

Perfect Storm's entertaining performance was rounded off with the appropriately titled epic How It Ends. Next to a final demonstration of the bands superb interplay, it brought an indescribable highlight when Oosterwijk took proverbial centre stage during the song's ambient bridge. Her angelic voice elevated the song into stratospheric heights. The intensity of the song followed suite and created an overwhelming passage of heavenly music.

Seeing is believing so please check out this small part as performed on their Progdreams festival gig. After the wave of spine chills had settled within the venue, a short band introduction preceded a final festive revisit to the song's concluding melodies. A splendid evening came to an overly satisfying close. 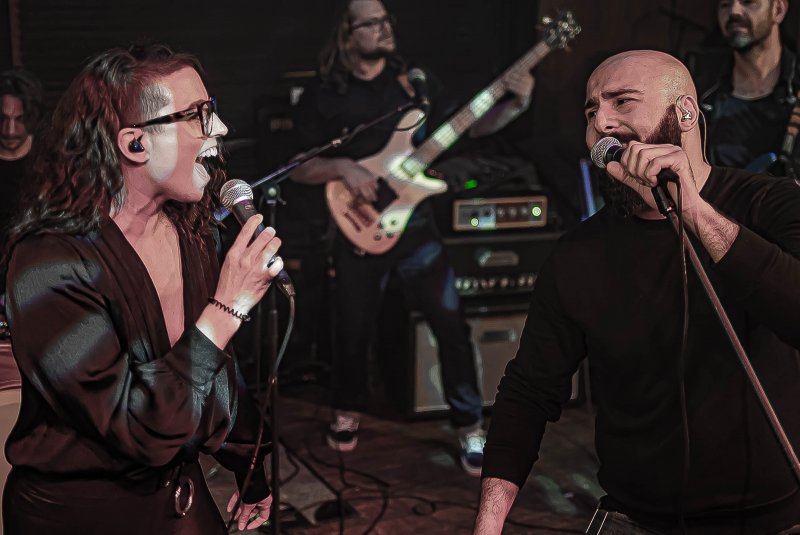 Socialising for a short duration after Perfect Storm's set, I finally waved my goodbyes and drove homeward in a flash. I just witnessed two passionate performances, where each band in their own field very much deserve a bigger stage and audience. In Perfect Storm's case this opportunity arrives with the 2022 edition of the Midsummer Prog Festival in Valkenburg on the 25th of June, where they are scheduled to open the festival, which will also feature Klone, RPWL, Antimatter, Mystery, and Leprous.

My advice to ticket holders and those still intending to go, is to arrive early, get a good seat and witness this young and promising band in full glory. Together with the scenic drive and Valkenburg's renowned hospitality, my guess is you won't regret it. Finding a parking spot is a slightly different affair, so if anyone has any tips then please share, and I'll see you there!