I don't recall the exact moment it started, but over the past few decades, a group of music-minded friends present each other with concert tickets as birthday gifts instead of CDs. Out of necessity, for it's hard enough to keep track of one's own collection, let alone be on track with a friend's one. But more importantly, nothing beats a night of excellent music spent in the company of friends who share a love for the same music. Over the years, this has resulted in many a memorable night listening and enjoying music to the fullest all across the country, dining and wining in anticipation prior to these events.

This is about one of those events, seeing Grobschnitt Acoustic Party in May of this year.

When one of my friends turned 50 in the same year that Grobschnitt celebrated their 50th anniversary, it was virtually a no-brainer to invite him along to one of their Acoustic Party concerts. One of the highlights in the year I turned 50 myself was catching them in the act in Neuss on the 27th of November 2019, just prior to Covid's upheaval. I was eager to see them again, so tickets were readily secured for their gig on the 16th of December 2021 in Rosenhof, Osnabrück. With anticipation growing, Covid threw a spanner in the works again, which meant the scheduled date had to be postponed, but come the 12th of May 2022, the concert finally took place. Here's what happened during this sunny day (and night). 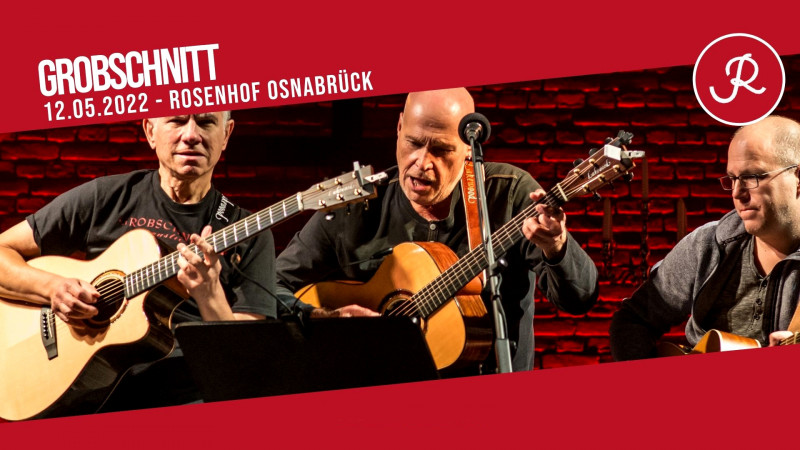 Experiencing some car-malfunctions prior in the week it was early Thursday morning I was able to pick up the fully repaired car at the garage. Upon turning the key and trying to shift into reverse it was clear I would need a quick replacement for the unchecked clutch plates where completely destroyed. A quick stroll to my wife's car, which sadly has no cruise control, solved the problem at hand and the journey towards Osnabrück took off, my anticipating smile still firmly intact despite the ominous expensive foresight.

To save on future expenses we decided to take a short break and petrol stop in a small town just outside of Osnabrück, after which we finally arrived in the centre of Osnabrück looking for the last available free parking spot we could find. Finding that spot at a mere 300 meters away from the venue proved our luck and with spare time on our hands we enjoyed a typical German meal with accompanying beverage in the sun until it was time to make our way to the venue.

We were expecting a row of like-minded Grobschnitt fans awaiting to be let in as we walked up to the venue around 19:45, but as it turned out we were rather late to the party, which was almost sold-out, and the venue was already packed with fans. Finding a near excellent spot on the second row, right in front of guitarist Lupo, it wasn't much later the lights dimmed and classical music filled the hall, signalling it was time for Grobschnitt to start a new leg of their Acoustic Party tour. 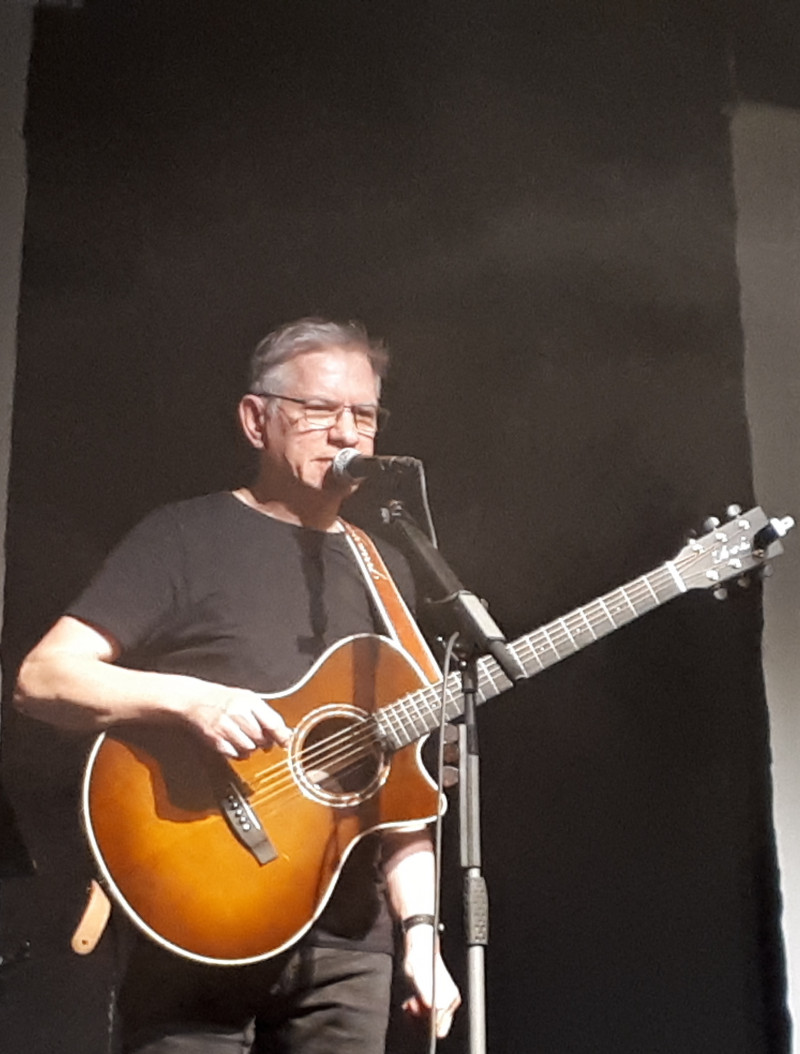 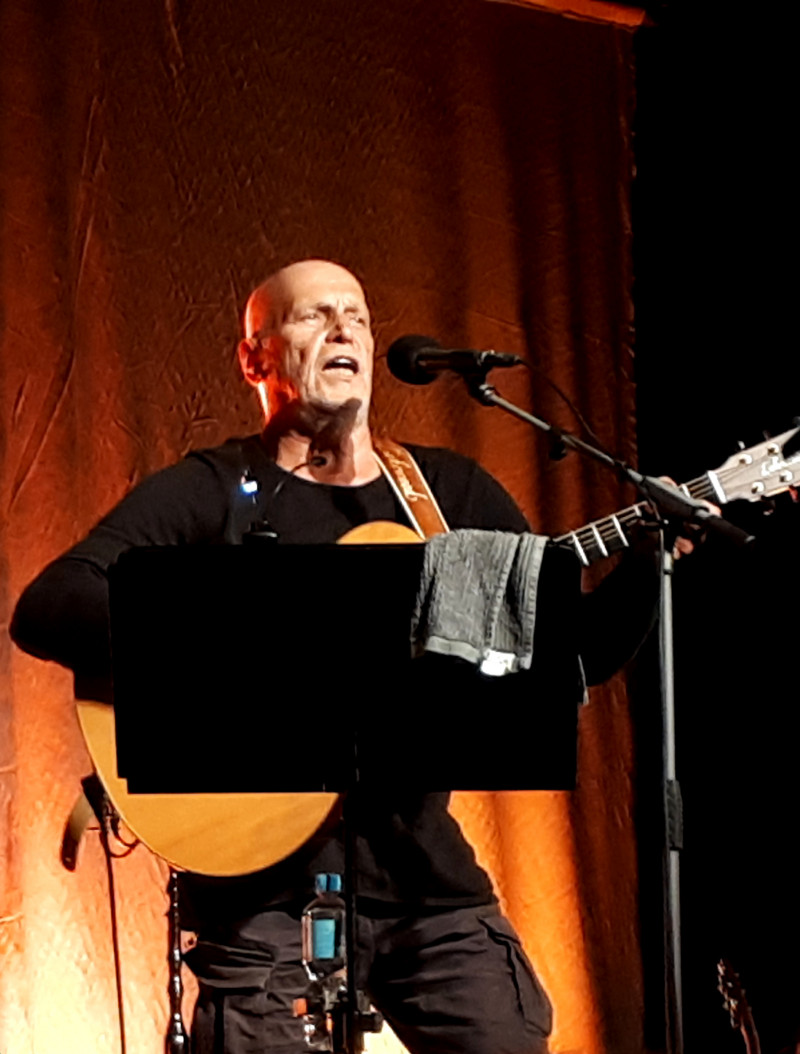 Walking on stage and settling themselves in their designated area, Lupo left, Nuki right and Willi Wildschwein in the middle, they opened with a very familiar tune. After enquiry, this turned out to be the famous 1978 opening tune of Rockpalast, the television program which introduced them to me so many years ago. It was a marvellous experience at the time and tonight would be no different. Especially after the wonderfully sung words "Heut ist ein schöner Tag" ("today is a sunny day"), setting off one of Grobschnitt's most delightful epic songs, Vater Schmidts Wandertag.

The role division between the three smiling musicians is instantly clear. Lupo takes amazing care of all the lead guitar parts. Willi supplies rhythms, creates percussive effects on his guitar, and next to his captivating vocals, he adds occasional booming power to the music through a stomp box device. Both are complimented by Willi's son Nuki, who next to harmony and backing vocals, circles his way around their movements on guitar in support of the melodies. When excellent interplay from Willi to Lupo's magical touches takes place, it is Nuki who keeps the rhythmic melodies firmly streaming and seamlessly returns to his guiding presence when both take over into their original roles.

It may seem a small part in comparison to that of Lupo and Willi, but his contributions prove to be most essential to their overall sound and song arrangements. Even more so in later songs, where he gets to embellish various movements with percussive elements or other musical treats like tambourine or bongo. The next song, Wonderful Music, instantly shows this, when he takes hold of a pair of maracas and guides the lovely acoustic melodies onwards.

To heighten festivities, Willi's voice sounds as characteristic and voluminous as ever before, and that for someone in his 70s. Together with Lupo's re-found technique and skills, not having played the guitar for well over 29 years, they bring many goosebump moments. After the humorous stories addressing the period surrounding their 1974 album Ballerman, heralding the birth of Nuki and Germany's World championship (ouch), both Morning Song and Drummer's Dream only add to these moments in multiple ways. 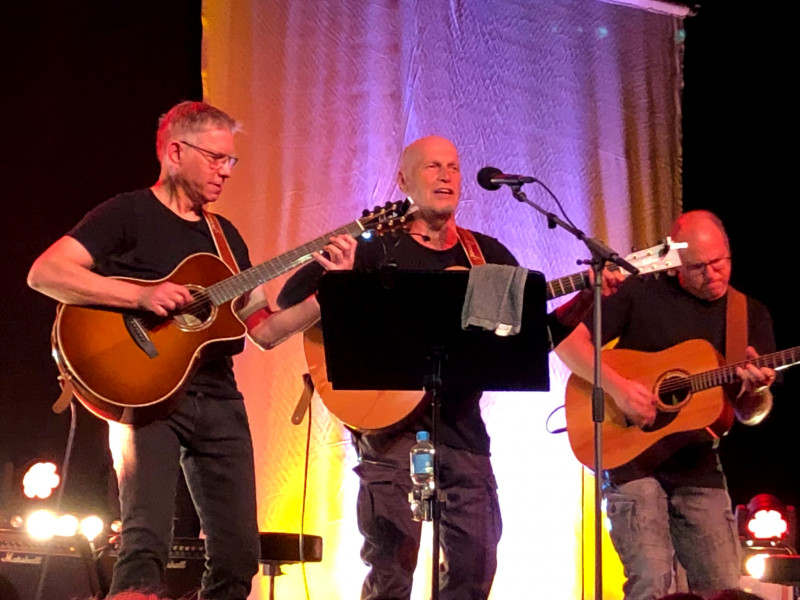 The setlist follows the band's history chronologically. The songs are an excellent indication of the band's wonderful growth during that time. With Nuki's clicking device dictating pace and Willi stomping away while he adds some delightful vocal quirkiness, its Lupo's guitar that becomes a fantastic sensation in Morning Song, resonating awesomely close to the original recording. And it becomes even more impressive in the excellently played Drummer's Dream, which is followed by a marvellous version of Traum und Wirklichkeit from their Jumbo album. Preceded by another humorous story delivery, this time by Lupo, it is then time for one last song before the intermission. Well, song... it's the complete Rockpommel's Land suite.

If there's ever a question whether an iconic symphonic prog album can be rearranged into an equally compelling 30 minute length acoustic suite then here's the undeniable positive answer. As one of their magnum opuses, it's an assured highlight in their set. Not only for its artistic value as a whole, but also for the many magical musical moments. The incredibly beautiful ending of Rockpommel's Land itself is a majestic moment in musical history, as far as I'm concerned. In 2019, it left me utterly speechless. I was only able to nod to the fan sitting beside me, before I made my way out to the bar and pulled myself together again. I'm still not sure whether I succeeded or not.

Under minimal lightning, the sublimely executed and elegantly compacted Ernie's Reise, Severity Town, Anywhere, and the first part of Rockpommel's Land passed by in what looked like seconds. Then, the only smoke of the evening used as staging effect announced the song's finale. It gradually intensified into its blissful emotional ending, and it left everyone in the venue, including the band, utterly speechless five minutes later, when in the song's prime moving moment, that same smoke knocked out all the stops and set off the venue's fire-alarm. Slightly stalled at first, the band picked up where they left off a few minutes later. They rounded of their first set, met by great appreciation, sympathy and enthusiastic cheers for the crowd. 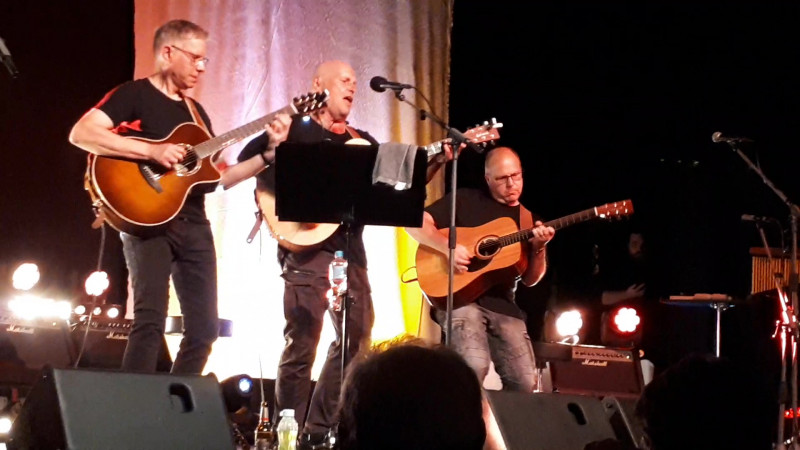 Arriving right on time obviously meant we didn't have time to check out the various merchandise the band had brought along. Next to a variety of T-shirts, bags, mugs and jackets, this included their new Acoustic Album which would see its official release date the next day, on both vinyl and CD. The few irrelevant savings done on the day instantly vanished into thin air. Another tasty German "Weizen" beverage found its way into my hands, as we returned to our seats for the second part of the show.

Set 1 ended with an overview of the band's musical history until 1977. After the intermission, the band continued with 1979's Merry-Go-Round, which immediately recaptured the concert's relaxed and engaging atmosphere. Although not my favourite track on the album it's a perfect example to the threesome's accomplishments in arrangements and immaculate interplay and an uplifting fun song to watch and listen to. The sheer beauty of their next song, Silent Movie, ushered the audience to complete silence, a momentum that extended in the equally attractive Raintime. 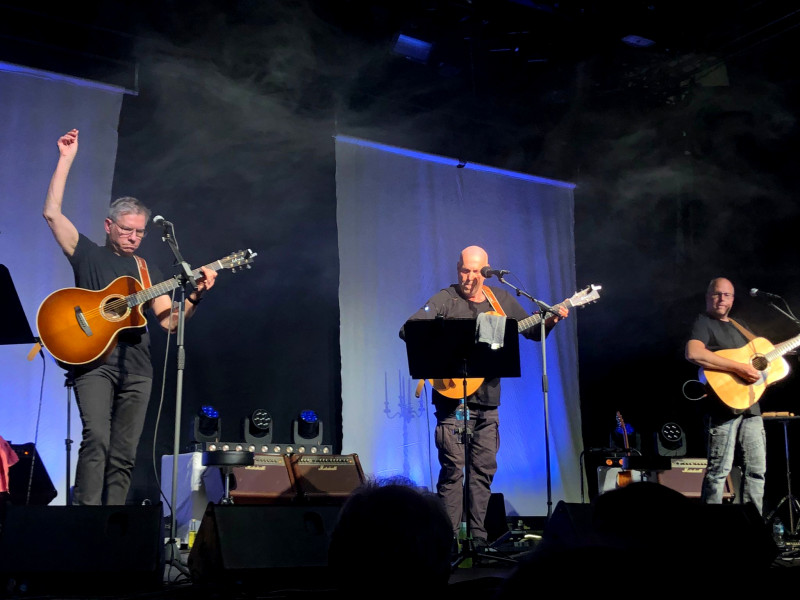 The setlist was a few songs shorter than on their 2019 show, omitting songs like Snowflakes and The Sniffer. They arrived at the concerts penultimate track, Köninge der Welt, from their Kinder und Narren album. Normally a poppy affair in comparison to the previously songs, yet laid bare in this acoustic setting, it fell perfectly in place. It showed that musically there isn't much difference between the versions. Having fun, also with the lovely shared anecdotes and interaction between the three musicians in mind, it sure meant time flew by quickly and the band has already arrived at the last song of the evening.

Prog-fans alike will sometimes jokingly respond by saying that doesn't mean it's over any time soon for there's always the possibility towards a song that lasts 30 minutes. Those familiar with Grobschnitt know this for a fact and indeed the band ended their second set with their anthem Solar Music, a song that could last well up to an hour in their heydays. Nowadays, the structure of the song is a delightful assembly of the various official versions released throughout their career (Ballerman in 1972, then 1978's Solar Music Live, and finally Sonnentanz in 1985), and lasts, indeed, 30 minutes, taking their 1985 Sonnentanz effort, my favourite Grobschnitt album, as a template.

Those thirty marvellous minutes starts off with an introduction that shares a likeness to the Ballerman version and gradually shifts into Sonnentanz's Explosionen variant, with its authentic hymning "wabbedidada" chorus. It glides into intricately designed ambient atmospheres, surrounded by twittering bird sounds and Lupo's phenomenal spellbinding technique, that keeps the audience enchanted. It slowly passes through passages reminiscent to Solar Music Live and after a short part of Neonherz picks up pace in the uptempo Wir sind die Sonne segment. 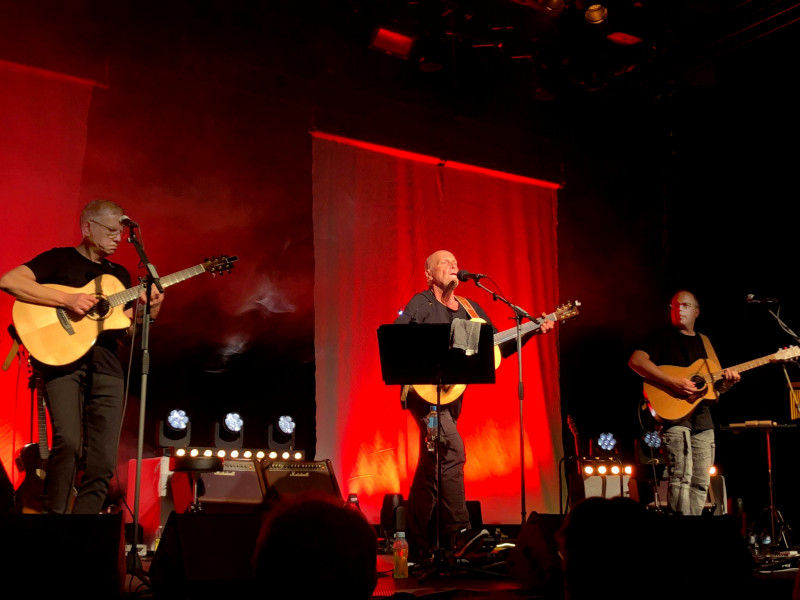 Fourteen minutes into the song is where the song's ever-changing improvisations start, with Nuki on percussive all sorts, Willi keeping rhythm and adding occasional atmospheric vocals, while Lupo gets to whip it out marvellously. The song intensifies into Solar Energy and shortly revisits "wabbedidada" melodies. Nuki then steps up to the plate for the song's energetic solo. The composition ultimately fades into its emotionally touching and heavenly Solar Music III apotheosis. It results in a fully deserved standing ovation. Gently lit by a burning chandelier at the back of the stage, this applause is appreciatively taken in by three all-ears-smiles as stage lighting fills the hall again.

With the album version of Der Weg nach Haus (The Way Home) playing in the background and the band taking their bows, a wonderful night of enchanting music came to an end. It wasn't completely over yet, for after the music died down the band returned on stage to sign the various albums their devoted fans had bought or taken with them to autograph. The band gladly obliged, showing appreciation. Some people brought their whole collection, which meant they were on stage quite awhile before they could finally retreat to the comforts of their dressing room, where yours truly could do a short interview. The results of that conversation will turn up later on our website.

We were still amazed at all the recollections and stories told during this hour, when my friend and I made our way back to the car. Three hours later I went to bed fully satisfied, having experienced a day I personally would love do all over again. Even with the expenses paid the next morning when I picked up my repaired car. I'll start saving just in case. 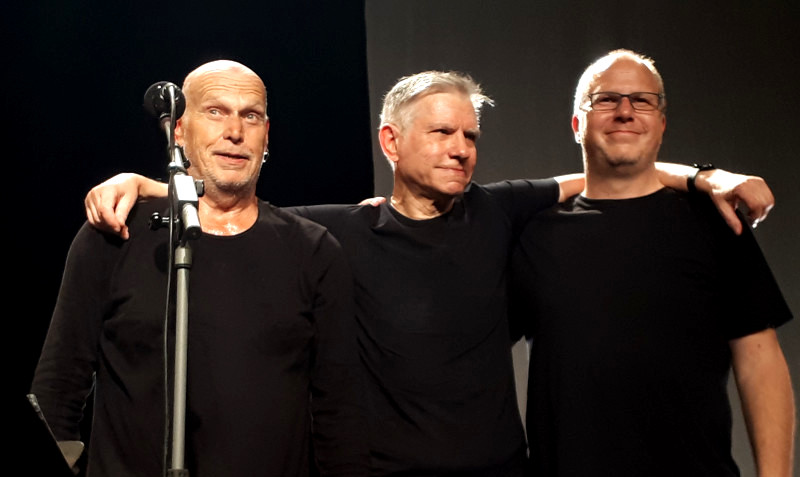