My previous visit to the Parkvilla venue in Alphen Aan Den Rijn had been the double headliner of Frank Carducci and Comedy Of Errors on the 26th of September 2015. The last time I attended a full band concert with my wife dates even further back (Twelfth Night, 24th of November 2007, London), although her "being compulsory dragged along for the ride" feeling might give a better representation as to why she was there. This time though, with the foresight of Serious Curry and the relaxed atmospheric ambience of the Parkvilla, she jumped at the chance. 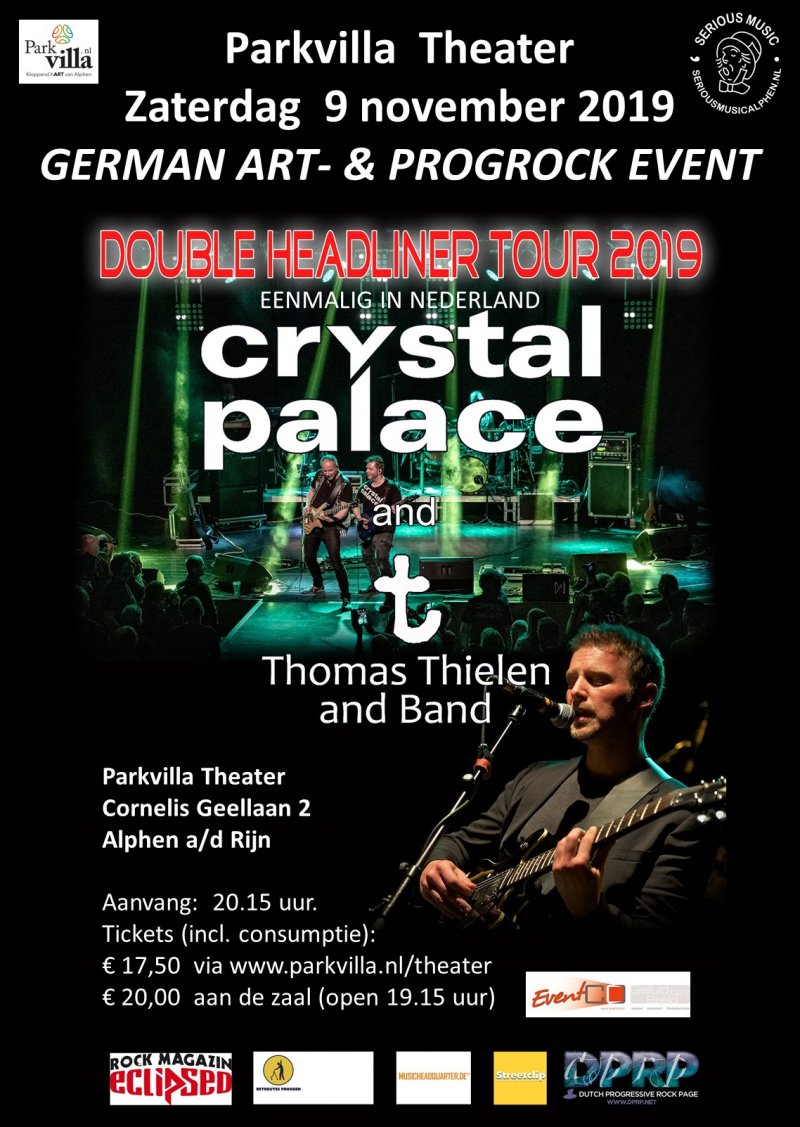 Both mostly unacquainted with the music awaiting, apart from my own familiarity with some of Thomas Thielen (T)'s music through my review of Solipsystemology, we went in straight from work, making it just in time for some fiercely hot and spicy curry, co-organised by fellow DPRP team member André De Boer. Some small talk to some of the band members and several necessary cleansing beverages later, the doors opened and we found ourselves a lovely spot at the heart of the theatre. Not long after Crystal Palace took to the stage.

Equally impressive was the almost spot-on sound quality placing each key instrument perfectly harmonious and audible in the mix, with only a slight hindrance of reverb in the vocal mix. The respectable level of volume also gave way to a feeling of relaxed enjoyment and aided by the seated comfort it gave a whole different meaning and experience as opposed to a regular concert where you have to stand for hours on end.

The slowly building Inside Your Dreams followed, paving the way for the first epic track of the evening: System Of Events of the album by the same name. It's many melodic changes and melancholic passages flowed naturally and one could sense and witness a band that progged like clockwork. The stable formation and touring prior to today's concert certainly paid of, with each musician consequently nailing their performance. 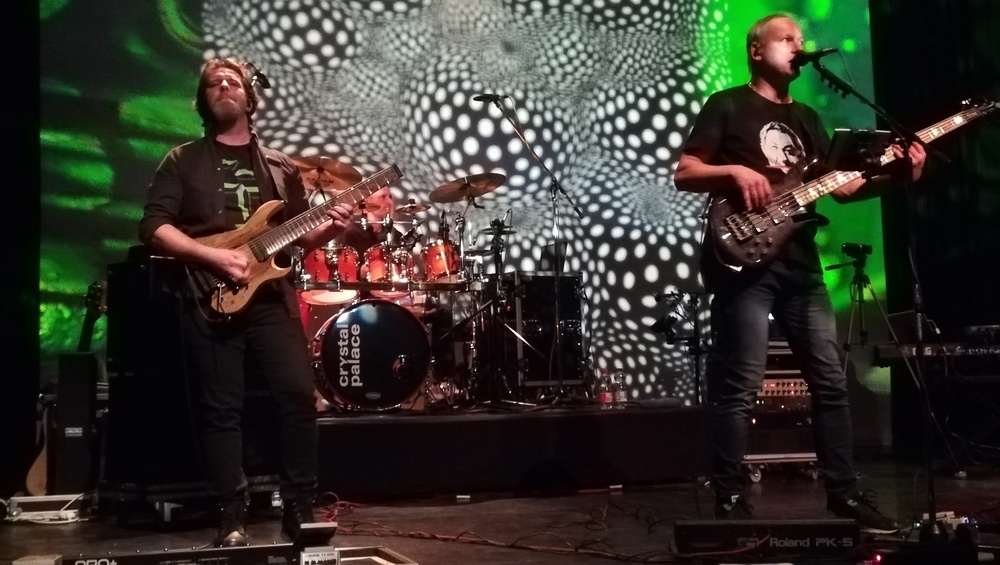 Their approachable refined yet technical music, flavoursome enhanced by graphical background projections, on occasion reminded me of Porcupine Tree, IQ and Riverside, within a compositional style of Eloy, emphasized by the vocals by Strutz. And although he suffered slightly under a light cold Breath, Simply Irresistible Cruel Intentions and Sleepless were met with great approval from the audience. So much so that Strutz's own humble request for an encore prior to Sky Without Stars wasn't really necessary.

For me the exquisite encore Beautiful Nightmare proved to be their highlight of the evening, where its slow intensifying build up and utmost thrilling guitar solo delivered goosebumps. A song that may haunt my dreams everyday which, judging by the reactions around me, seemed to be the case by many attendees. As a token of gratitude a respectable standing ovation befell upon them from the audience, after which a short intermission followed. 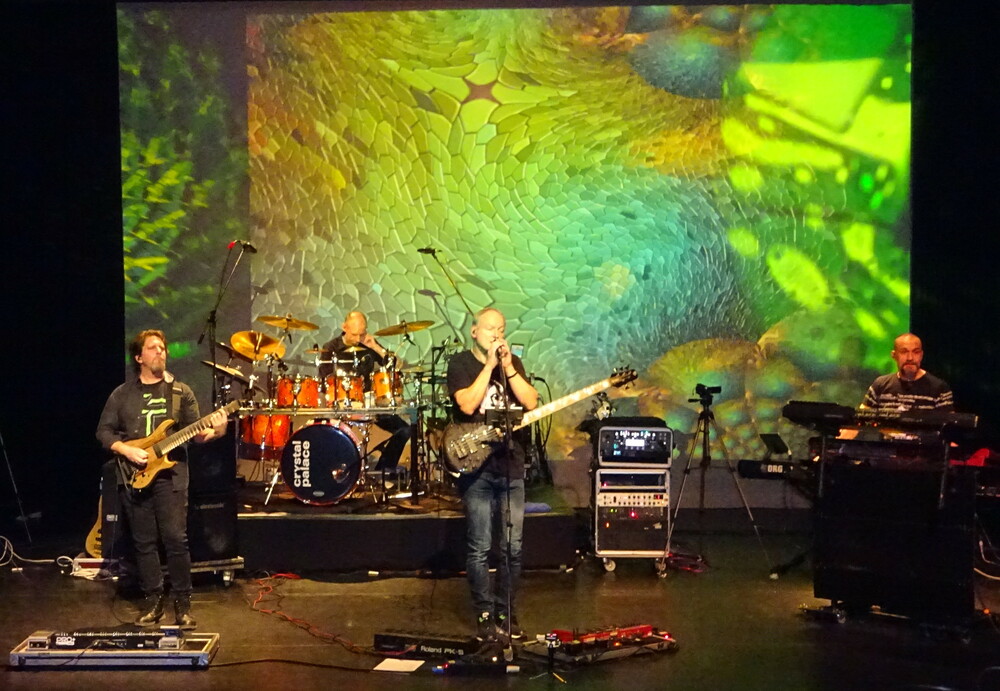 After his first ever live performance at the 2019 Night Of The Prog Edition at Loreley (Sankt Goarshausen, Germany), T decided to follow through with a small club tour going under the name of "Curtain Call". Handling vocals and guitar himself Thielen thereupon formed a band consisting out of bass player / backing vocalist Jens Uwe Strutz of Crystal Palace (doing double duty on tonight's gig), Dominik Hüttermann (keyboards), Thomas Nußbaum (drums) and Jan Steiger as second guitarist.

And in line with his musical musings, under the enchanting presence of a sober backdrop of the Epistrophobia cover, one of T's albums, the relaxed vibrant prog-atmosphere created previously by Crystal Palace immediately changed into one of breathtaking intense joyful oppressiveness by the beautiful opening sounds of The Aftermath Of Silence from his Psychoanorexia album. Instantly grabbing the audiences attention through his tuneful warm unique voice, sounding like a mixture to David Bowie and Steve Hogarth (Marillion) this epic enduring track passed by almost in a haze, constantly shifting from fragile minimalism into overwhelming melancholy thus changing sceneries throughout, highlighted brilliantly by even more impressive instrumentation.

Safely seated, the perfect setting to encounter T's song-within-a-song compositions, the complex Shades Of Silver had almost the same impact with it's refined complex heart-warming melodies and passionately radiated emotions and by the time the "ballad" The Irrelevant Lovesong had bowled many over, it was clear why T was considered to be the revelation of the 2019 NOTP festival. Today's intimate surroundings and superb executions might even have given more justice and depth to the songs, as evidently shown in the delicate breathing sensitivity of Curtain Call, filled with many delicate details and arrangements to be found within the immaculate performances. 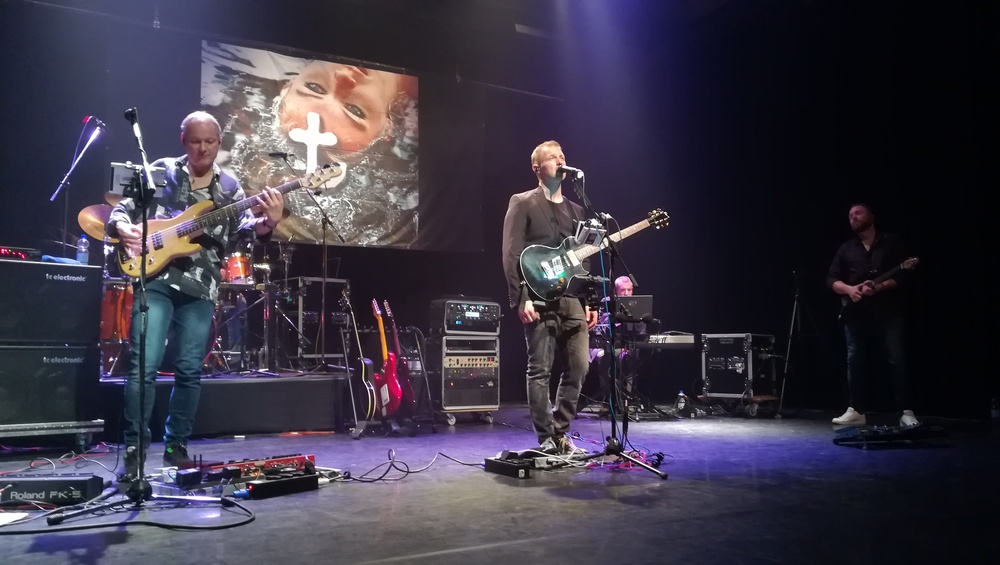 For those unaccustomed with T's compositions, one look to my wife said as much, a blissful though short resting point in form of A Forest by The Cure followed. It had been given the eclectic T-treatment, resulting in a now (almost) unrecognisable marvellous track, incorporating many different arrangements and orchestrations. A most worthy tribute to one of T's inspirations.

Next to the engaging presence of T, delivering many emotive solos on guitar, each member humbly shone on different occasions. For instance in About Us Steiger laid down some delicious spine chilling solos, while Nußbaum played some perfectly timed subdued drums, meanwhile showcasing exceptional air-drum and violin drum-stick skills. With Hüttermann whipping it all out in the excitingly ferocious unforgettable end section of Forget Me Now the regular set ended on a euphoric high.

First encore She Said immediately pressed everyone securely into their chairs again, and its serene simplicity combined with moving beguiling vocals and gorgeous melancholic guitars touched every living being in the room with many fighting and (unsuccessfully) trying to hold back the tears. And so with Neverland, a song originally by Marillion, pre-ended one of the most touching performances I have witnessed over the years, which wasn't over just yet as both bands joined hands for an impromptu version of Heroes (David Bowie), thereby gathering many spontaneous sing along reactions from the crowd. 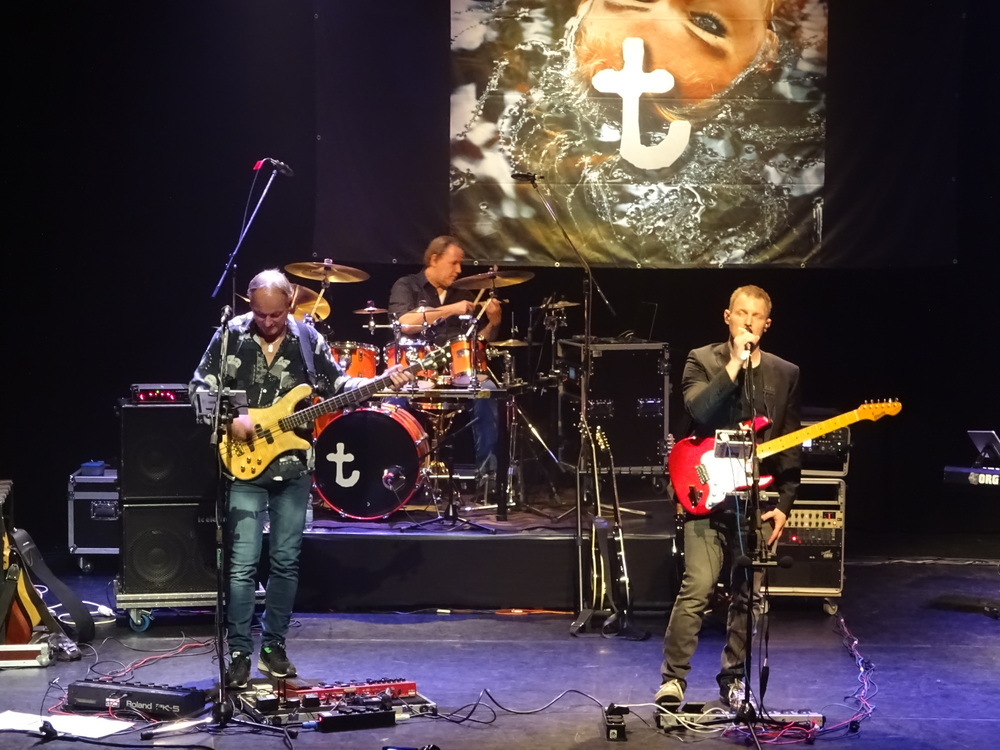 A special thanks goes out to Serious Music Alphen in taking the dedicated effort of bringing these lesser known bands (and many a-likes) on stage in Holland. Just before driving home satisfied, I was told that 2020 marks their 10th-anniversary year and it should see some exciting bands on stage. So check it out if you can, for it might be worth your while.

As for T I can say that during the gig his voice sounded elegantly more light-hearted in nature than on record. Equally the tangible, breathing sorrow contained within the compositions of Solipsystemology was less apparent, although whether this applies for live renditions of these actual tracks remains to be seen, as there weren't any in tonight's setlist. The near scheduled double headliner concerts with one of my personal favourites Chandelier in march will hopefully shed some light on this. Also I'm curious to see whether he can sweep people of their feet once again in yet another setting. Thank prog I'm prepared.