In the small town of Alphen aan de Rijn in the western part of The Netherlands a remarkable foundation resides: Serious Music. They organise gigs of Dutch and international prog rock bands, mainly using the nearby Villapark Theatre as their home venue, a compact seated venue in which the audience sits close to the performing artists. Although this venue lies close to the famous De Boerderij in Zoetermeer they succeeded well to contract interesting bands like Comedy of Errors, Wishbone Ash and Peter Hammill.

On November 9, a concert by Dutch band Silhouette was contracted with Mangrove, another well-known Dutch prog band, as support act. At least that was how it was communicated in the scarce media that actually announced this gig. Big was my surprise when Lenne Huisman, founding father of Serious Music, announced Silhouette as the first band. It turned out that this evening was to be a real double concert. 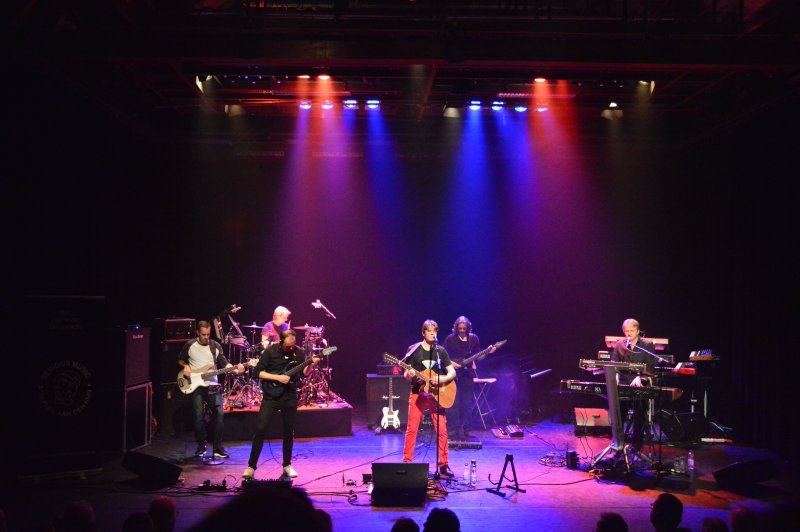 More than a year ago Silhouette had to cancel a gig in the same theatre due to very sad personal circumstances with bass player Jurjen Bergsma. And again Jurjen was not present but this time it was because of very happy circumstances: he had just become a father, quite a good reason not to show up. Mark van den Berg replaced him very adequately. He may have been the most static person on stage, but I think it is quite impressive that you can take somebody’s place in such short notice. Hats off to Mark, another cancellation would have been very disappointing to all parties!

A further disadvantage for Silhouette was that their sound engineer wasn’t available this night so there was a replacement taking care of the sound mix. He had quite some trouble finding the right balance. Erik Laan's voice was not heard during the first three songs while his keyboards were also not always audible.

So far for the criticism, for there was much to enjoy. Singer Brian de Graeve sang very well, the dual vocals with keyboardist Erik Laan worked out great after the initial troubles. Guitarist Daniel van der Weijde showed again his phenomenal talents on his incredible 7-string guitar, backed by Erik's son Bart who did an occasional guitar solo and further added to the full sound of the band. All built upon the solid drumming by Rob van Nieuwenhuijzen. The band played tightly and enjoyed the audience and themselves well; I really like to watch musicians who clearly demonstrate on stage that they like what they are doing.

The band started off, not surprisingly, with the opening soundscape of their excellent last album The World Is Flat... leading to the first of four songs from that album. What followed was a very nice combination of new songs interwoven with songs of all older albums A Maze, Moods, Across The Rubicon and Beyond The Seventh Wave. Live favourite When Snow Is Falling Down was dedicated to De Graeve’s father who was in the audience. 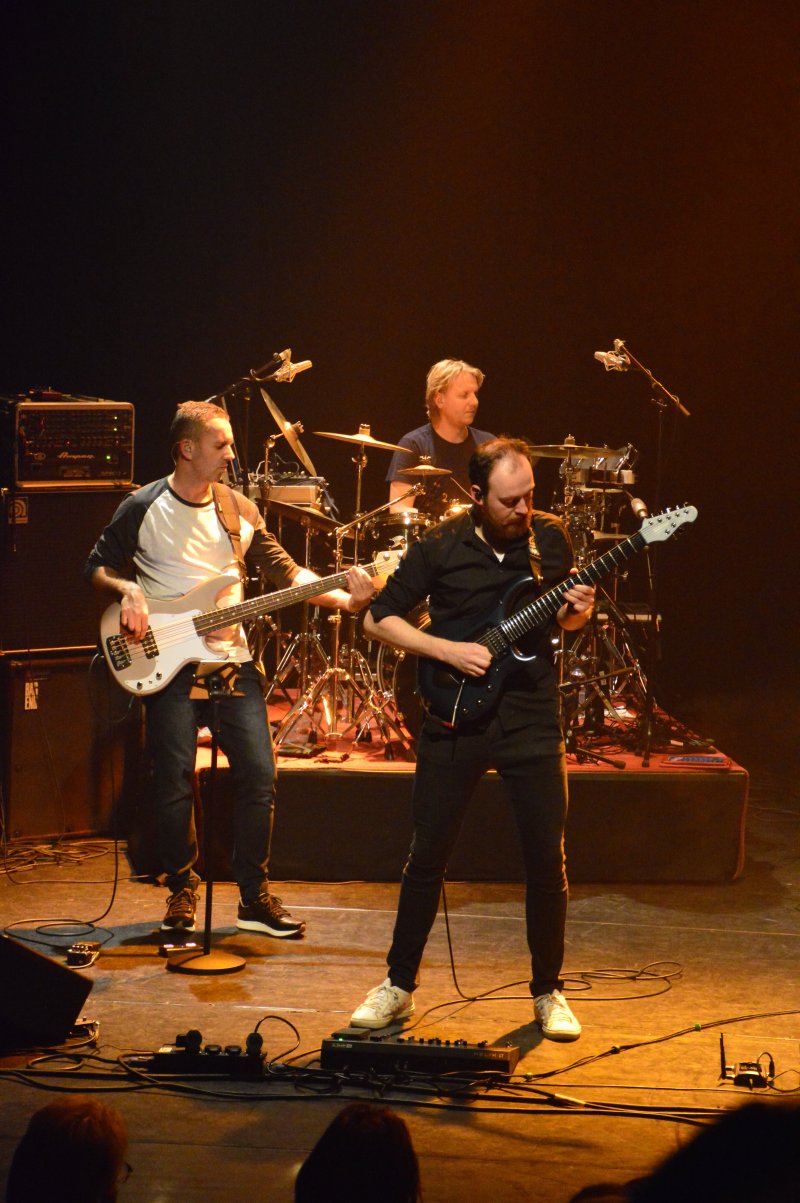 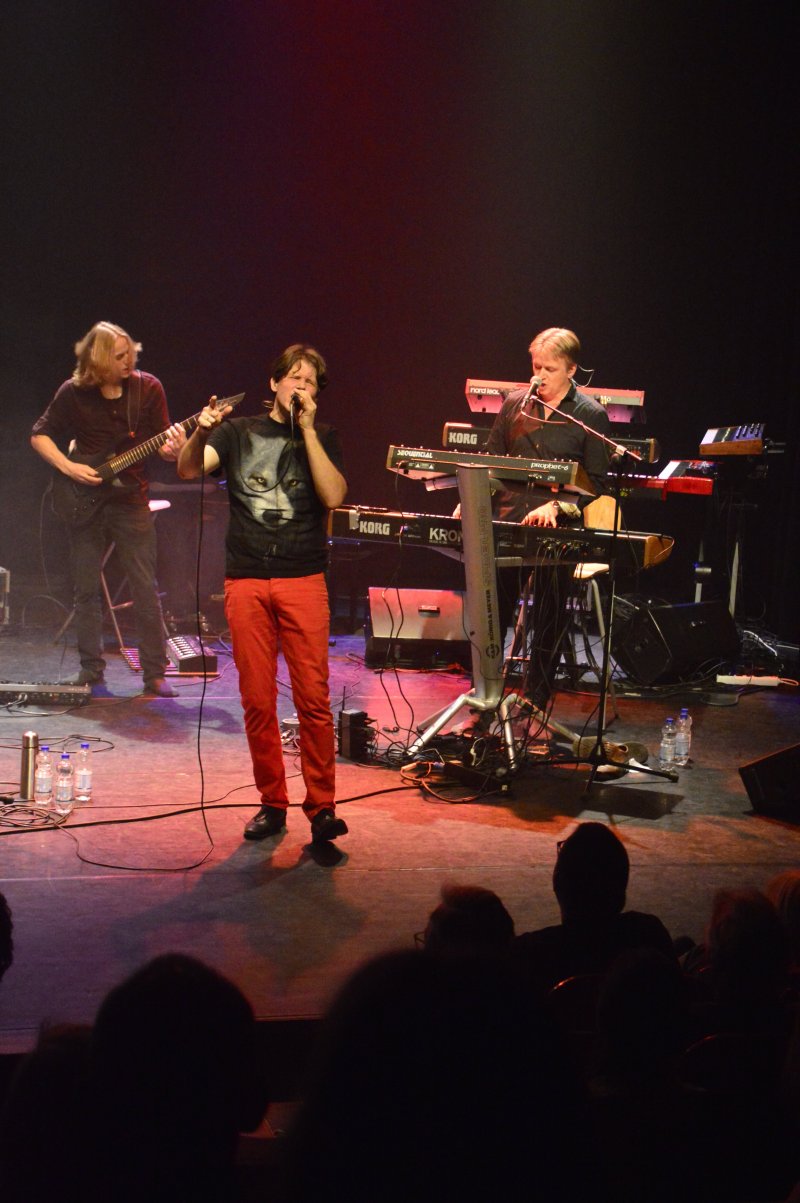 The band dared to end the set with the longest song they have recorded so far, Symphony For A Perfect Moment, in its entirety, much to everybody’s appraisal because it was performed very well. Of course they were called back for an encore for which only Brian and Erik appeared. They played a pair of songs from their two oldest albums with De Graeve on acoustic guitar and Laan on grand piano that had been standing on stage almost invincible all evening. Very intimate and very nicely done.

For the last song, the whole band reappeared to play the dynamic Web Of Lies, one of the highlights of their Beyond The Seventh Wave-album. And thus we enjoyed almost 1,5 hour of excellent Dutch prog by a band that ranks amongst the best The Netherland has to offer in prog.

After a short break, the stage proved almost completely cleaned for Mangrove, a band that had been silent for a couple of years after the release of the well-received Beyond Reality album in 2009. When announcing the band to the stage, Lenne Huisman already revealed that the band was working on new material now that the present line-up had established itself well. Founding member Roland van der Horst plays guitar and does all vocals, Chris Jonker plays keyboards, while Pieter Drost on bass and Lex Bekkernens on drums form the rhythm tandem.

From the first tones it was apparent that this line-up of Mangrove is a very tight ensemble in spite of the long period of inactivity as a band. The two youngsters of the rhythm section play very dynamically, very supportive to the intricate and long instrumental passages that characterise Mangrove’s music. They filled the left part of the stage, not moving much but just concentrating on their playing.

Jonker's keyboards, all situated on the far right side of the stage, provide everything from wide carpets to delicate and subtle notes gluing together the melodies. In-between there was ample space for Van der Horst, who is the main focal point of the band. He used that space intensely, walking from left to right and back with his intriguing small wireless white guitar from which he managed to get a great variation of guitar sounds. His rather high voice sounded well. 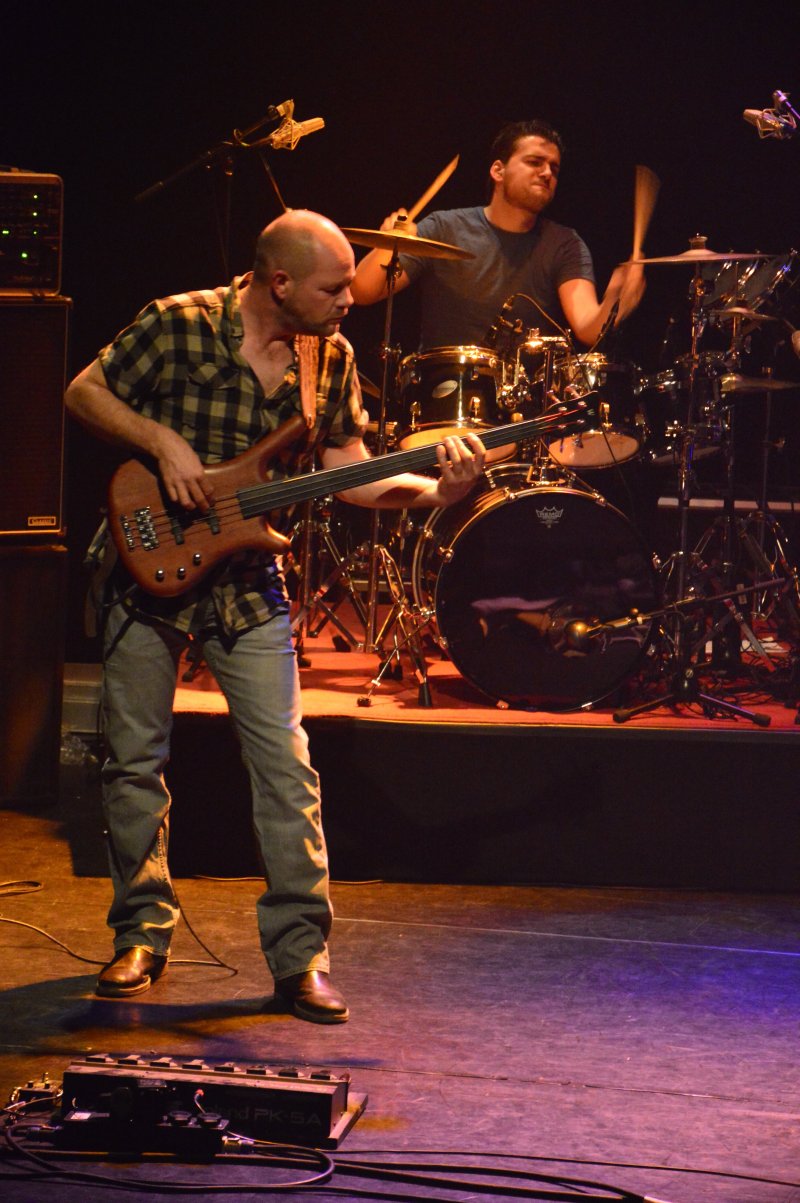 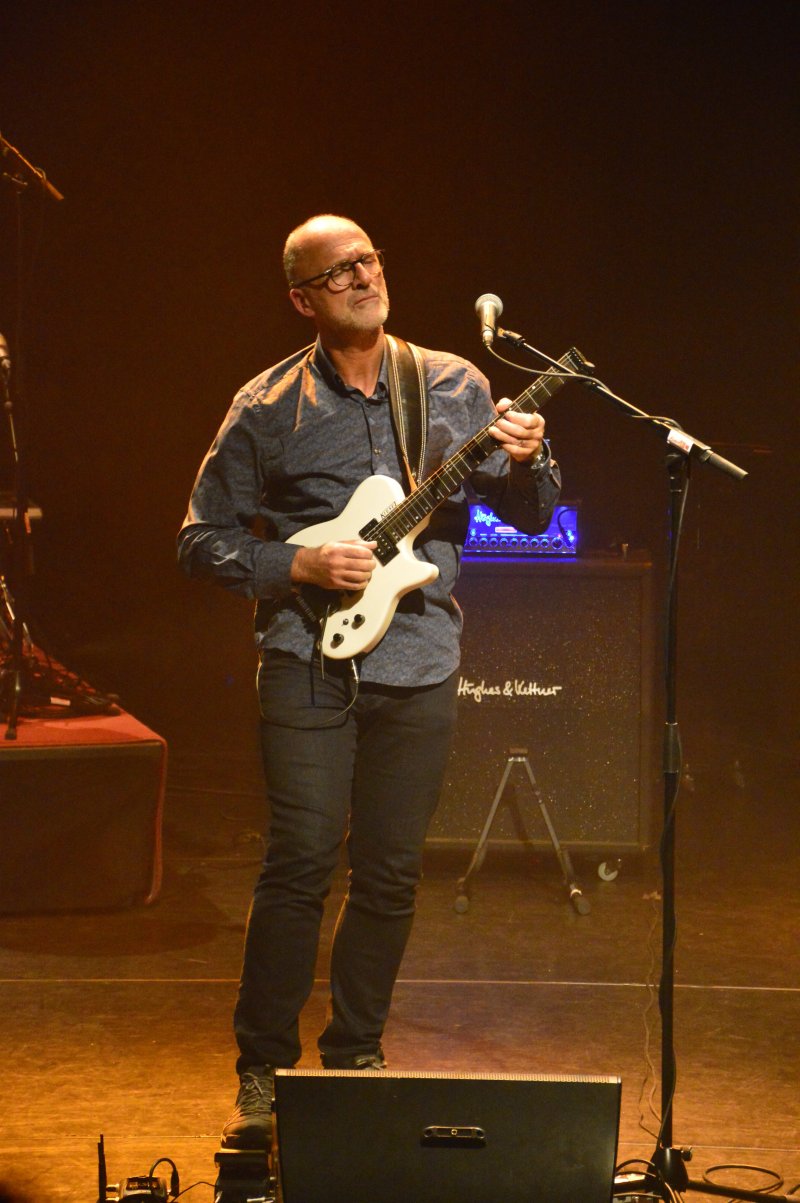 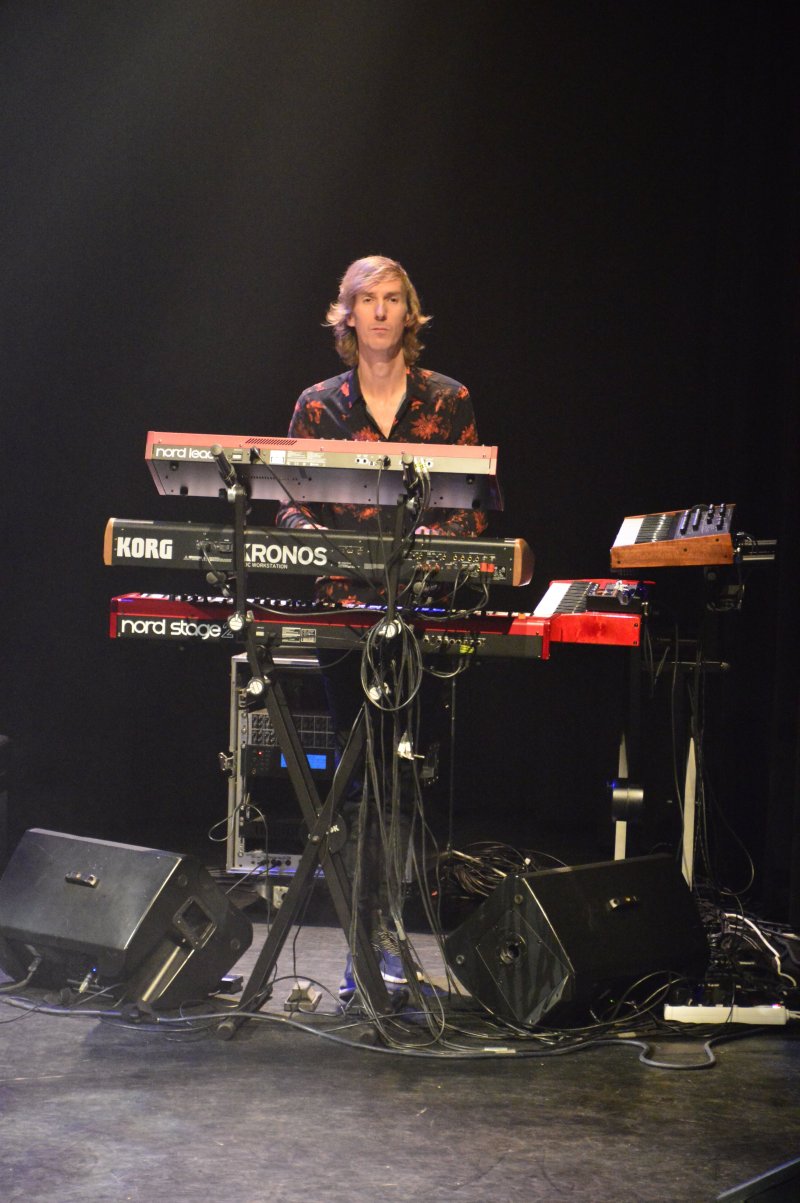 The emphasis of the setlist came from the last two albums, Facing The Sunset and Beyond Reality, presented with three songs each. From the debut album Touch Wood was Wizard Of Tunes. They surprised us with a new song, entitled Reflexion, in which especially Bekkernens excelled. The new song illustrated that the band can be expected to further develop their musical career effortlessly. All songs were played tightly and close to the original arrangements, clocking at respectable lengths with ample opportunities for solos. The sound mix was far better than with Silhouette, as apparently Mangrove had their own sound technician doing the job.

My former live experience with Mangrove was in a café nearby my home town in the presence of less than 10 attendees. In spite of that discouraging atmosphere, the band fully delivered then and impressed me because of that. Now it was a great joy to experience Mangrove in a mature setting. Witnessing them this evening everybody can only hope that the new album will be released soon.

This was another great Dutch progrock night to remember. For those who remained home: you definitely made the wrong choice! To Serious Music, well done, you and the great bands deserved a sold-out house, which surprisingly was not the case. 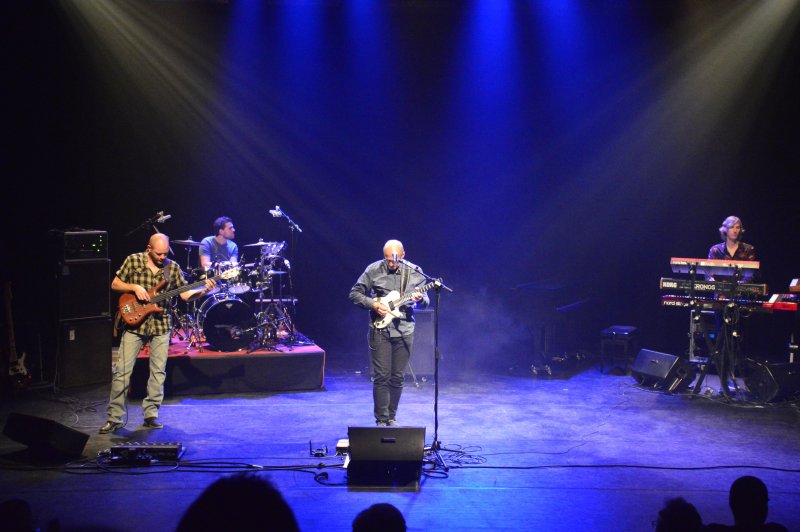