While executing a random search on the internet in 2016, my heart skipped a beat on a result when I googled Beltane Fire. Could it actually be that Different Breed, their marvellous record, was to be released at last on CD with several bonus tracks? Further investigating confirmed this but also something else I had never anticipated on. To my astonishment they still existed after all these years, though in a slightly different alter ego as rockabilly act The Blue Cats. Sure, they have a different bass player, but basically together none the less.

My heart immediately skipped a beat again for as luck would have it, just five weeks later The Blue Cats were to appear at The Cruise Inn Festival in Amsterdam, some 20 odd kilometres away from my home town. Needless to say I went and had a fun time without knowing any of their tracks. All but one that is, for they played Nightfishing; a highlight of Beltane Fire's Different Breed album from 1985. I happily returned home, cherishing this sweet moment. If only, I thought...

And now, just three years later the unthinkable happened with Beltane Fire performing on a rescheduled date on the 26th of April at Mattfest 50 in "The Water Rats", London. Resistence was futile - I jumped at this second opportunity, I could not let this pass me by. The bonus of Mellotronanism and Jump (who I had witnessed once in 1994 at Rotherham), I took as a nice complementary gesture. 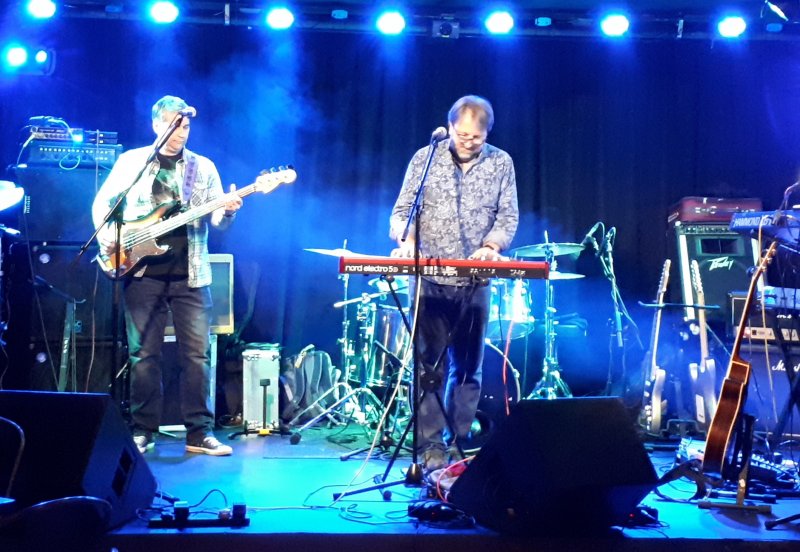 Knowing my way around London on the tube I obviously arrived too early, having to settle down on a pint. The sound check by Jump had just finished and Mellotronanism where about to start theirs. Politely, Matt Ellis, organiser of the event under the Prog Sausage banner, let me in early to witness the last funny bits of the sound check. I found a spot right in front of the stage which was not hard to do - the distance from the bar to the stage was 10 meters at most. If there would have been 150 people inside, the place would have been packed. This wasn't the case just yet and once Mellotronanism started not many were there. It did however not break the spirit of Ed Percival (vocals, guitar and keyboards) and Matt Bell (bass).

On the smallest of stages possible and hardly any manoeuvrability, they played a short attractive set of delicate refined prog-rock songs, opening with Stagestruck from their EP First Thoughts. The duo (they seem to drift somewhere between solo and full band formations) followed with a nice selection of new tracks like Kingdom Come, Tin Drum, and Ebb And Flow which was played in a abbreviated form but showed proggy promise. Percival assured us to bring a drummer and a proper keyboard player next time, which in this relaxed intimate setting weren't missed, but according to him would do the songs more justice. Having compared them to the EP now, I can only concur. 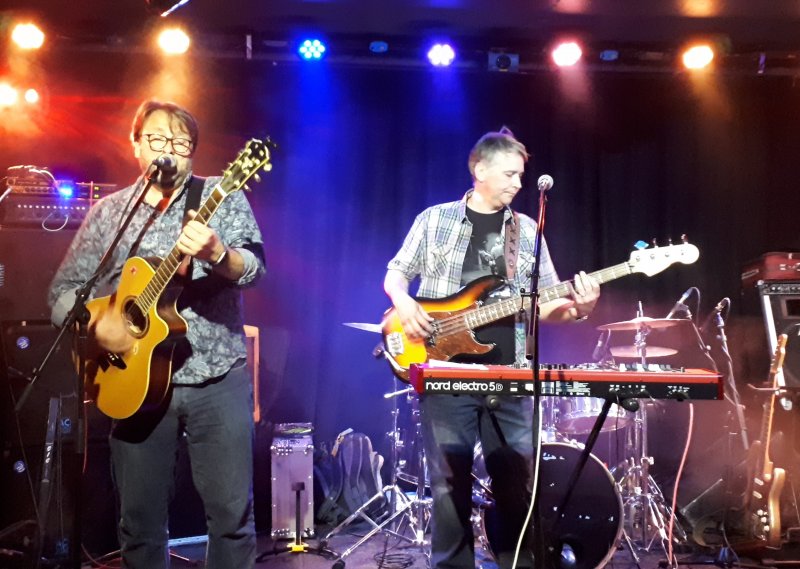 The perfect rendition of Round Dance, a song of the 1983 record Paradise Moves by Airbridge,of which Percival used to be part of, however showed exactly why this wasn't needed for all tracks. I was instantly taken back in time when Percival almost single-handedly gave a very accomplished version through tuneful singing and keyboard playing, oozing with beautiful mellotron sounds. Some songs had been christened another name for the occasion, which I can't get into detail about for Brexit reasons, but these changes had the whole crowd smiling, laughing and reacting enthusiastically. So by the time they asked the audience to participate on their last song, they certainly got what they asked for, though not always exactly in tune with the song. All in all a fun time and a relaxed warm up for Jump. 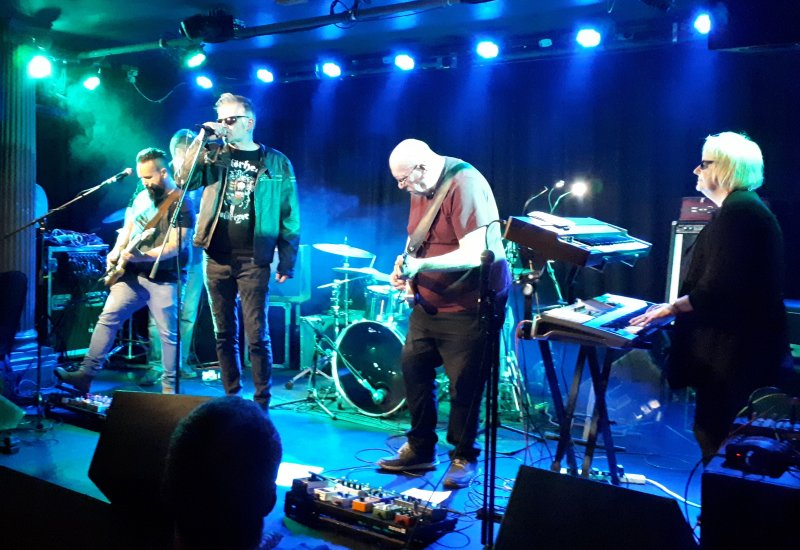 After a short interval Jump immediately gripped with a good sound, with each instrument individually to be heard. Six people on a small stage meant there was hardly any place to move, forcing Mark Pittam (bass) to stand at the back next to the drums which were adequately applied by Andy Barker. Together these two formed a firm and solid rhythm section driving the neo-progressive tracks onward, reminding me of bands like Credo, Comedy Of Errors, and Marathon. Even feelings of For Absent Friends came up, inflicted by the strong guitar solos from Ronnie Rundle in tracks like Station Parade and We Woke A Million People.

At the heart and centre of the stage their charismatic vocalist John Dexter Jones proofed to be a good entertainer, telling tales and interacting with the crowd. The tone of his rants were mostly critical and I'm afraid I sometimes missed the point in being Dutch. It did effectively make him the centre of attention, which was accentuated in him being the only one with any possibility of movement on stage.

Standing right next to him was secondary guitarist Steve Hayes, playing mostly in a supportive role, but once instigated he played some marvellous solos. As a result some dual guitar walls did drown out the keyboards played by Mo, who was standing on the right, but she enjoyed it anyway. 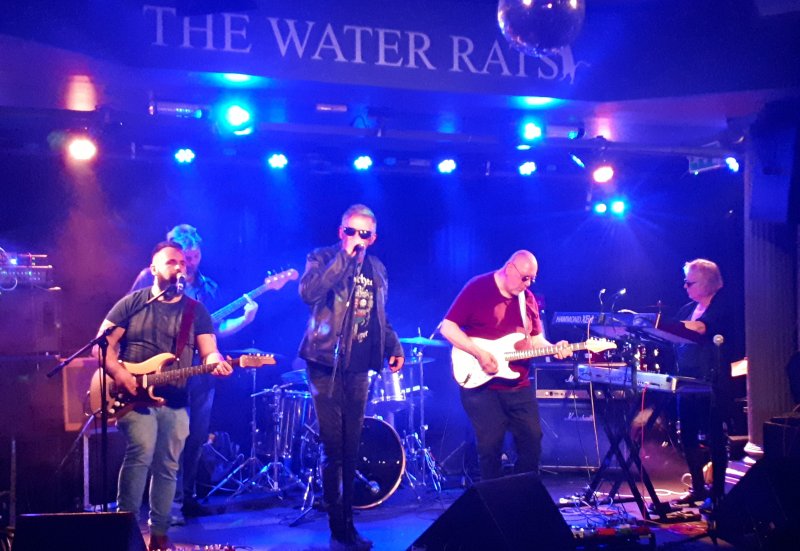 To the audiences delight they played several new songs, to be recorded in 2019, showing a slight change towards a more heavy guitar orientated style of prog, occasionally reminiscent to Pallas. Continuing on a selection of songs from their most recent effort Over The Top(review here) they triumphed with Johnny V containing lovely Floydian guitar, harmonic vocals and bluesy organ. Last tracks Free At Last, with band introductions, finally ended a solid performance leaving it to Beltane Fire to bring it home. 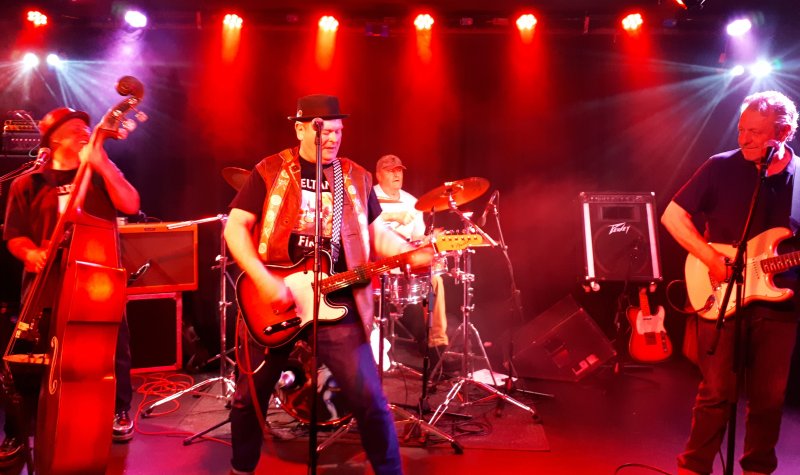 And I might sound a little biased now, but they surely did bring it home! After a short introduction by Matt Ellis, Nightfishing opened their set and immediately had the audience captivated and shouting the lyrics. The energy level coming across from Jump had been decent and fair, but this was doubled in an instance. I was expecting some kind of energy from them, having witnessed The Blue Cats three years ago, but that proved to be just a fraction of tonight's vivacity. And during the concert they maintained this energy level and even intensified it on several occasions.

Clint A. Bradley, in the middle on guitar and vocals, gave out his calling card straight away with strong vocals and solid rhythm guitar recreating the feel of the album instantly. This was further enhanced by the enthusiastic backing vocals coming from Steve Whitehouse and Carlo B. Edwards, adding extra depth and a lovely spontaneous feel to the music. With Stef Edwards on drums at the back, playing his parts with dedication, tightly and skilled, the mood was immediately set as one of joy, to both parties; audience and band. And they didn't let go.

Different Breed followed, embodying Beltane Fire in a nutshell, for they are indeed something out of the ordinary prog-boundaries with their rockabilly influence. The way they execute it with other musical inheritances is however remarkable and makes them quite unique. I have yet to encounter a band which matches this sound, with only The Blue Cats coming close (duh...). What makes them stand out even more from a live act point of view, is the presence of Whitehouse on upright double bass, which isn't exactly what you'd expect in prog rock. 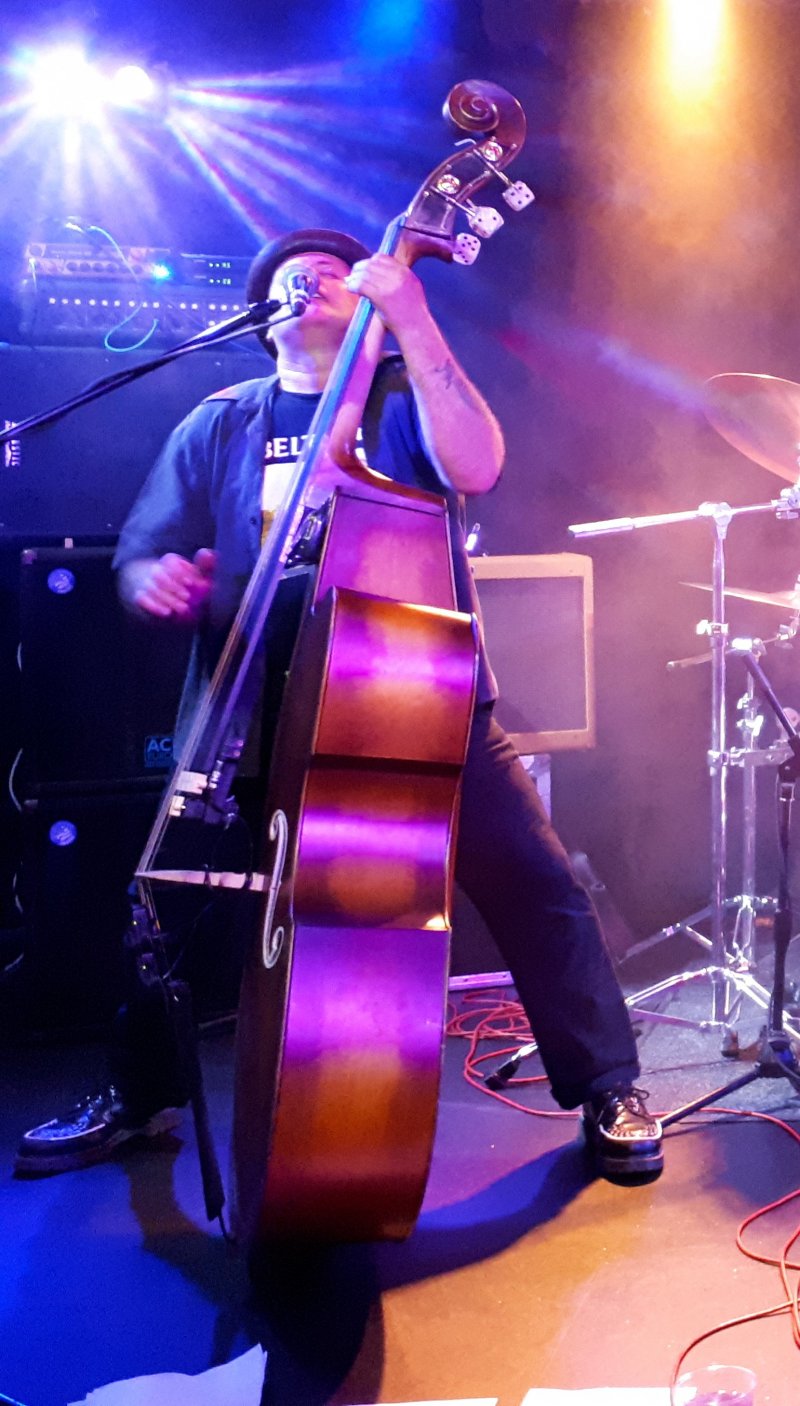 Beltane Fire. Photo by Jan Buddenberg, used by kind permission The way he plays it gives a drive to the music, fitting perfectly to the up tempo tracks. A special mention should go to the way he handles the instrument itself by plucking it furiously, though still caressing it at the same time, like a kind of love affair. His mimic, jolly and smiling all the way whilst attending his skills, adds an extra amount to the interaction abilities of the band. On the other hand humbled Carlo B. Edwards, on the right side of the stage, remained completely focused in playing his refined melodic guitar parts. This way he managed to replicate that beautiful guitar sound which is so appealing to the album, and every so often supplied backing vocals to heighten the impact of songs like Nightfishing and Captain Blood.

On the album, keyboards play a minor yet significant role which through slightly different arrangements I'm happy to report weren't missed at all. And thanks to Bradley, using a foot peddle giving sudden outbursts in volume and sound, these progressive touches where delicately overcome, for instance in Run (Light The Beltane Fire) and The Poacher. Captain Blood probably had the most re-arrangements of them all, pulling it out of it's prog context towards a more rockabilly environment, still flowing natural throughout.

Next to seven tracks of the original album they played some older tracks featured on B-sides to singles, and a few surprises. Three of those surprises turned out to be tracks from their alter ego, being Billy Ruffians, The Norton Spirit and the aptly titled Gotta Go! as the last encore. Hearing them in this setting the musical differences to Beltane Fire are actually a very thin line, occasionally crossed. The real surprise was Where My Father Walked which had it's first outing, having been written sometime around 1986. Luckily this precious moment has been captured on camera by Market Square Heroes, a fellow organisation/website situated in the UK, who intend to initiate a collaboration with Beltane Fire.

Thus ended a wonderful evening, and fully satisfied I left a happy man as did all the other attendees. Though I have to mention there weren't that many. Unfortunately it stayed in the confines of 60 people turning up and it seems this low attendance is becoming a global phenomenon, sadly. I hope circumstances will become better, for enjoying original music this way is so much rewarding, not just for us as fans but for the bands as well. Luckily some devotees still manage to arrange these events so a big thumps up to them, for this time it marked the live return of Beltane Fire. And good things come in three they say, so I look forward as to what lies in store, for as it happens Beltane Fire have 14 demos in the hold and have just spread the word for a second record. They got my vote. 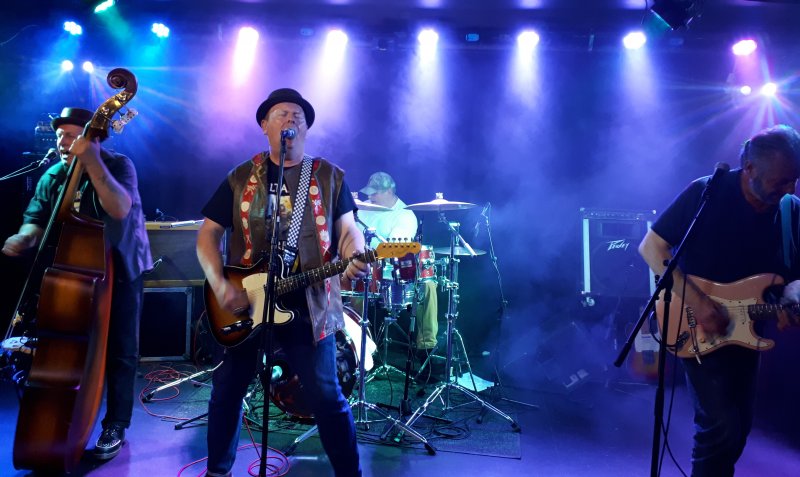