Right in front of the release of their album Random Acts Of Liberation, Dilemma went on a European tour with Sons Of Apollo. This brought them to De Boerderij on October 4th in 2018, but that gig was sold quickly. But a second chance came just 5 months later. DPRP's Jan Buddenberg was sure to make it this time. 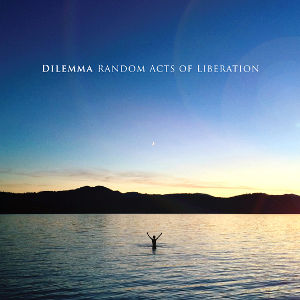 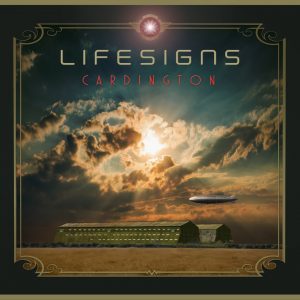 With Lifesigns, programmed as the main act, musically not entirely unknown to me, and Dilemma's latest album still very much at the top of my all-time favourites (read my review here), I was looking forward to a great evening of highly entertaining music. It meant re-acquainting old friends, meeting new friends, and basically have a good time. Ticket sales proved to be slow considering the amount of social media attention. Not sure whether it made a difference, but this gig was scheduled on the exact date and time-frame as the national televised finale of Who’s the Mole series, which had a record-breaking 3.9 million viewers. I’ll take a concert over that sort of thing any day, and fortunately I was not the only one. The initial number of a 100 gradually growing to 250 is still a remarkably low attendance. But all who where there knew we had made the right decision!

Just 30 minutes after the doors opened, Dilemma took the stage to the intro of Spiral Pt II and went straight into The Space Between The Waves. A strong, complex song and perfect for opening their set, but the sound and mix wasn’t quite there yet. Drums were too loud and the guitars and keyboards where hardly audible in the mix. Contrary to this, the bass seemed just fine and Dec Burke’s vocals were perfectly audible and an instant feast for the ears. Some tweaking later, the sound slowly shifted to a better balance and all instruments could be heard separately. Right on time for Amsterdam (This City), which ignited a spark aligning the band and audience with its magnificent ending. 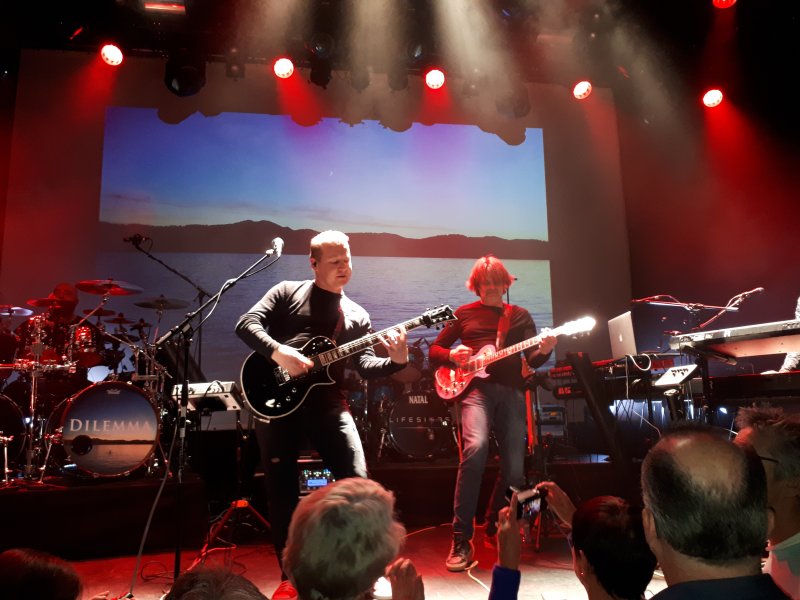 Leijenaar, concentrated and smiling behind his drums, and a stoic Van der Vlis (bass) were positioned on the right. With an equally concentrated keyboardist Robin Z. on the left, it was mainly left to Burke, the friendly, enthusiastic, humble Brit, and guitarist Paul Crezee to interact with the crowd, which they did accordingly. In order to play as much as possible, conversations were kept short, and they went straight into the divine Aether, keeping the flow going and give the audience just what they came for: brilliant music in a wonderful sound setting.

But things couldn’t have gone more wrong, for during the song the microphone of Burke fell silent, and mending it whilst playing caused some serious sound-issues. As a result, the volume on Burke’s microphone never reached its old setting and essentially got a bit lost in the mix. They did however manage to bring it all together and when All That Matters ended everyone had adjusted to the sound.

The sampled, heavenly background vocals added the right amount of depth to the songs and were a delight to hear. Playing alongside this was expertly done, albeit a slight hiccup at the start of The Inner Darkness occurred, professionally resolved by all. The opening overwhelming majestic waves of the studio version turned out to be more like a soft dripping shower, but once the exciting up-tempo vigorous middle section began it was smooth sailing onwards. 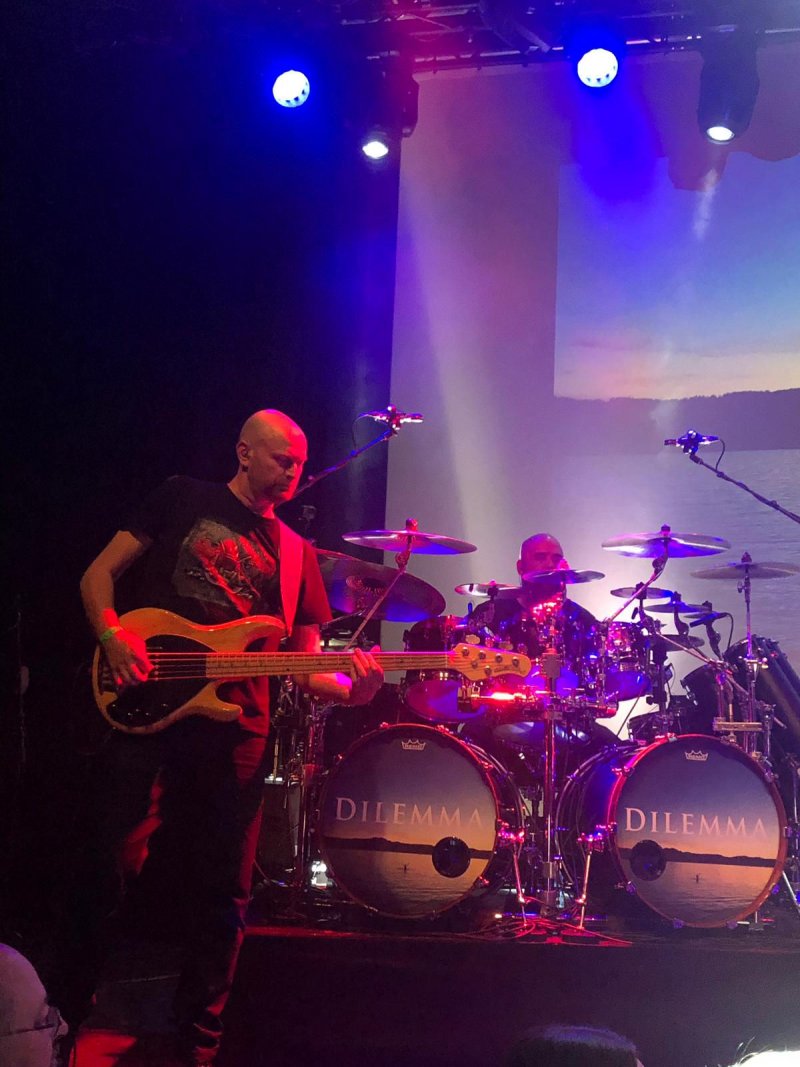 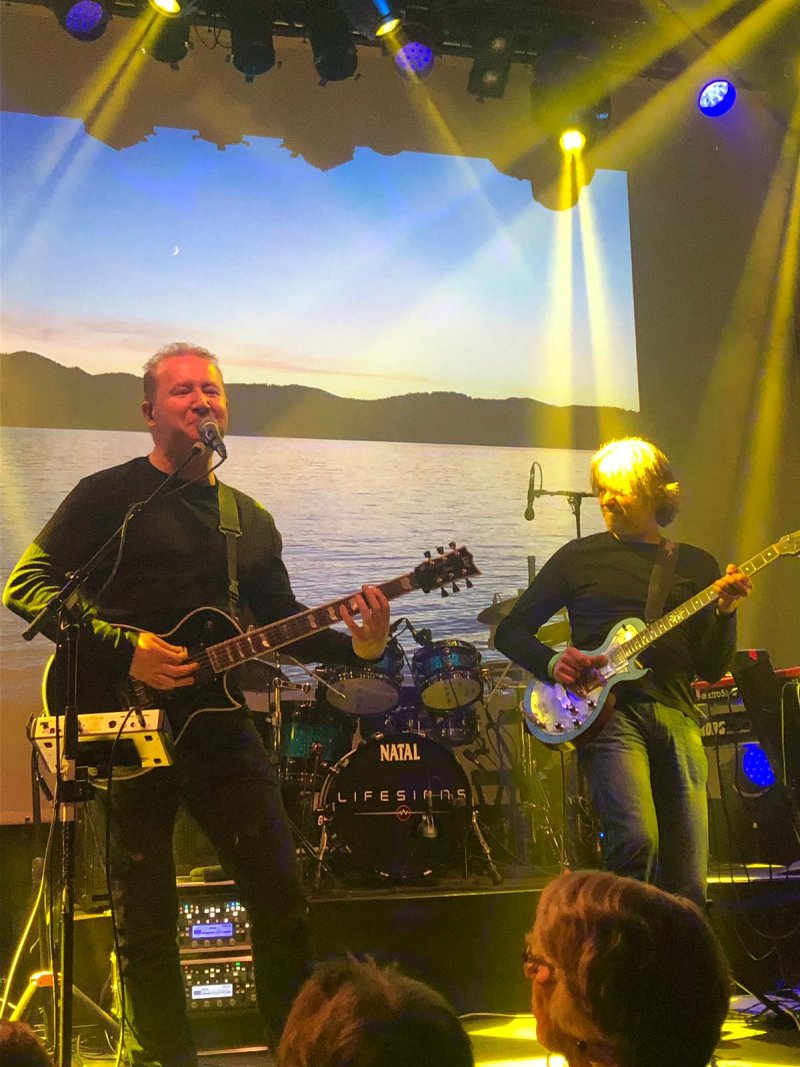 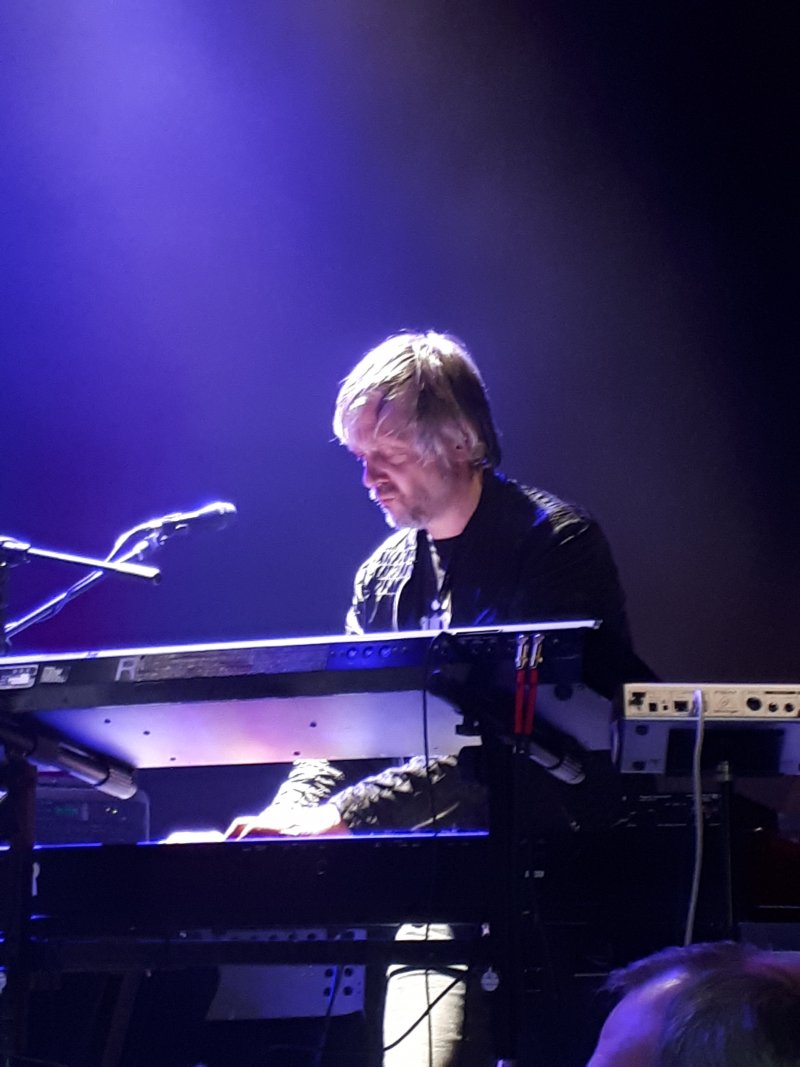 The interaction of both guitarists was a delight to see and memorable as well, for Burke unexpectedly played almost all of the emotive solos, supported by strong overall guitar sound-scapes by Crezee, who uses a hand technique I have never witnessed in all my years of attending gigs. It worked like a charm though, which became obvious in Wonder (Not My Own). Featuring lovely, intricate drums and fierce bass, the song was elevated by gorgeous solos, setting up the crowd for Openly, which once more proved how wonderful elegant but yet complex these songs are. With the explosive middle section, ambient sounds and eruption at the end the crowd was now really warmed up.

Play With Sand rushed by like a storm, generating cheers from the crowd. When my personal favourite Pseudocomaphobia was played, in a different arrangement, it could have lasted for several more hours, but alas it was the end of their set. A strong, heartily fulfilling set with the minor setback of sound problems, but worth every penny. I'll catch them again on Loreley Friday the 19th of July, hopefully revenging their sound issues.

Where one band was plagued by sound demons, the other one, in this case Lifesigns, has no issues whatsoever. To be more accurate, they had an immaculate sound courtesy of their fifth member Steve Rispin, sound technician by profession. Right from the start, every minor detail could be heard, the balance was spot on with every instrument adjusted to the right volume. When walking from left to right, or vice versa, only the slightest minute differences could be noticed. What a difference one person makes, and Lifesigns used this superb wall of sound to their advantage.

The gig at De Boerderij was part of a small tour to support their album Cardington. And it showed this wasn’t their first one of that tour, for they were like clockwork. Band-leader John Young broke the ice, as if there was any ice to break, with jokes, funny stories and lots of British humour to everyone’s delight. His band mates interacted likewise with witty remarks and spontaneous responses making it a relaxed atmosphere all together. You would have had a great time and a great laugh even if you didn't like the music. But if you do, you were in for some delicious entertainment. 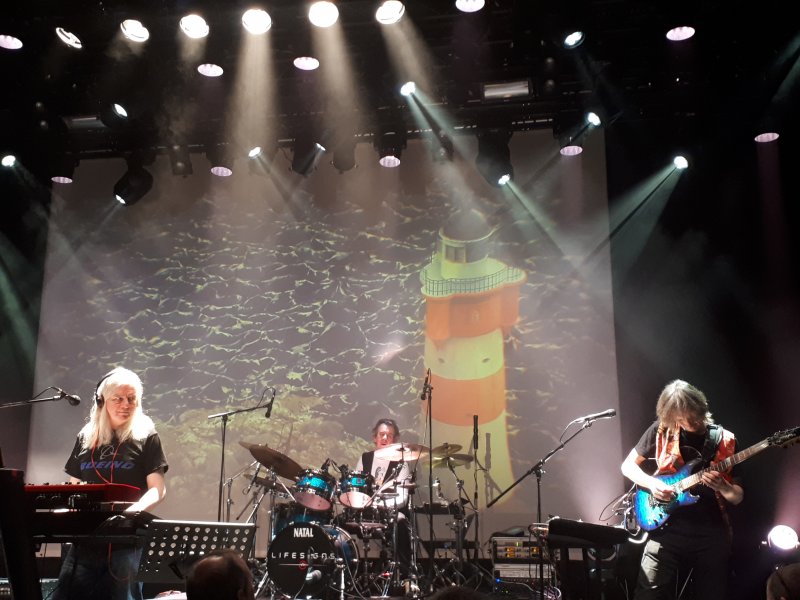 They played two sets without a fixed set-list, usually a nightmare for the lighting and sound engineers, but it looked and sounded amazing throughout. Jon Poole jumped happily around on stage, laying down firm foundations on bass, never missing a beat, whilst the solid and firm drum-parts by Martin "Frosty" Beedle gave the music a marvellous drive. On top of this, the bass pedals gave power and grandeur. With faultless playing by guitarist Dave Bainbridge, stuck in the right corner with keyboards as well, and John Young at the heart of it with refined multi-layered keys and a crystal clear voice, a stunning performance was to follow.

Epic tracks like Carousel, Cardington and N for one gave momentous feelings of progressive rock with divine touches of incorporated symphonic Yes. With Bainbridge throwing out Hackett-like solos against the strongly Genesis-influenced music, it felt like they were trying to sell England quickly, before a Brexit would happen. N required some keyboard practicing on Bainbridge's part, or so he stated, but yet again it was without fault, warming each and every one in the audience.

Against all this complex neo-progressive melancholic deliciousness, tracks like Touch and Chasing Rainbows showed the lighter side of Lifesigns with more concise pop-like structures. Playful tracks with a twist, showing the compositional strength of Young, he himself laying down sparkling gorgeous solos and warm soothing melodies amidst all this. The almost homely atmosphere benefited from the visuals, making the songs even come more alive. 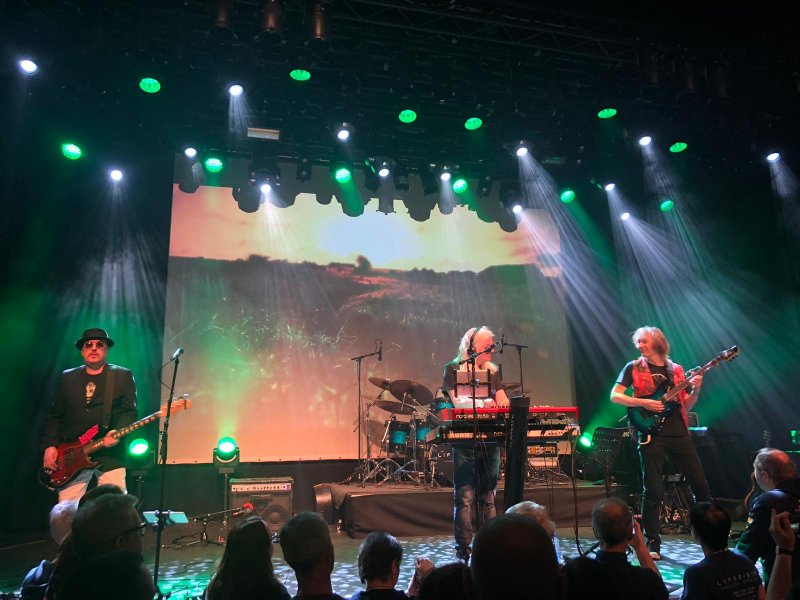 This worked best in the final track of the evening Last One Home, which hasn’t officially been recorded yet and originates from a short lived period of Qango: an earlier Asia-like re-incarnation involving Young with Carl Palmer and John Wetton. With my eyes fixed on the screen, projecting adrift fishing boats and alternating with pictures of a lonely "landmarq", the resemblance of Young’s voice to Wetton’s is almost beyond believe. With similar precision, an amazing track glides by, highlighting sumptuous delightfulness reminiscent of Wetton's Battlelines, Chase The Dragon, and epic symphonic Asia. To answer Young’s question whether to record this I can only mumble: yes please!

All good things come to an end and in hindsight this evening turned out to be greater than my initial assumptions. The revelation of Lifesigns in combination with the equally fulfilling Dilemma is probably the best counseling I have done in a long time. Non-deductible but so much more rewarding. My advice? Catch these bands in action whenever possible and hopefully the right sound-engineer will be present. Thanks Steve!

set 2 Cardington At The End Of The World Touch Carousel