The Pul in Uden still remains a very cosy, charming and friendly place, accommodating up to around 400-500 people; even more so when the balcony is opened. I further clearly remember gigs of Landmarq, Quidam, IQ and Everon, to name a few, which have a warm place in my heart so when the opportunity came along to see Steve Rothery perform again (this being 20 odd years ago for me), my decision was quickly made.

Reason for his visit was something special: a special two day event aptly titled “A collection of musical curiosities featuring The Steve Rothery Band”; with the band performing their own material but also some Marillion songs, and two classic albums on different nights; Misplaced Childhood on Friday and Clutching At Straws on Saturday.

As usual traffic made sure I arrived a bit late so only had limited time to see RanestRane, support act for Friday. I wonder whether traffic or the Friday night planning caused people to stay away for the place was only half-filled with mostly die-hard fans consequently leaving the balcony closed. Positive side-effect though meant there was ample of room for everyone to wander around and enjoy a highly entertaining night. RanestRane, featuring keyboard player Riccardo Romano of the Steve Rothery Band, played in support of their album Starchild (on which Rothery supplied guitars) and were unknown to me.

I fell in during Do You Read Me HAL, complemented by projections of 2001-A Space Odyssey by Stanley Kubrick, creating atmosphere and providing a little bit of a stage performance, for the setup was slightly challenging. Drummer Danielo Pomo and Romano were aligned in the middle background fronted by Maurizio Meo on bass and Massimo Pomo on guitars to the right and left upfront. Despite this somewhat detached allocation they still managed to get a lot of response from the crowd; aided by the interactive Meo supplying strong powerful bass-lines while in the meantime sweeping up the crowd.

Pomo on the other hand remained totally focused, playing ecstatic moving melodic solos, thereby seemingly forgetting he played in front of an audience. Romano, in very good spirit, played his parts cheerfully, thereby interacting on all levels available to him; dancing and swinging away. Lastly the alternating vocals by Pomo and Ramono added a nice twist to their music and with only 20 minutes of witnessing them, they made quiet an impression on me and the audience accordingly, playing a firm and strong influenced progressive style set in the early eighties reminding me often to Pink Floyd, Marillion and Genesis. Try catching them when possible, could be worth your while. 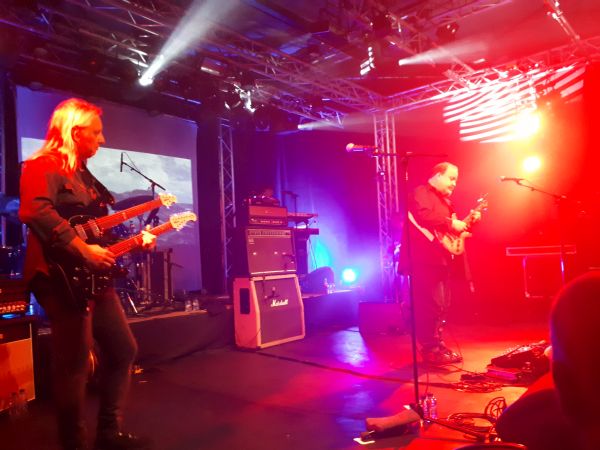 The reason for most of the audience turning up this Friday night was obviously the main ingredient, The Steve Rothery Band, who once the lights went out calmly walked on to the stage opening with Morpheus from The Ghosts Of Pripyat. Relaxed and in control Rothery and his fellow band-mates Dave Foster on guitars, Leon Parr (drums), and Riccardo Romano on keys started and regularly checked whether the bass problems experienced by Yatim Halimi would resolve, rightly doing so in the nick of time.

What followed was an excellent display of instrumental progressive rock, wonderfully executed, slowly resulting in slight interactions with the audience; which changed to satisfactory looking faces with The Old Man Of The Sea where Rothery proved once again to be a truly gifted musician capable of refined sensitive guitar solos, humbly giving Foster his own solo spot with an equally impressive and tantalizing solo. Rothery, talkative, charming and humorous, ended the highly entertaining first set with Summer's End promising us some wonderful music after the break, rightfully doing so. 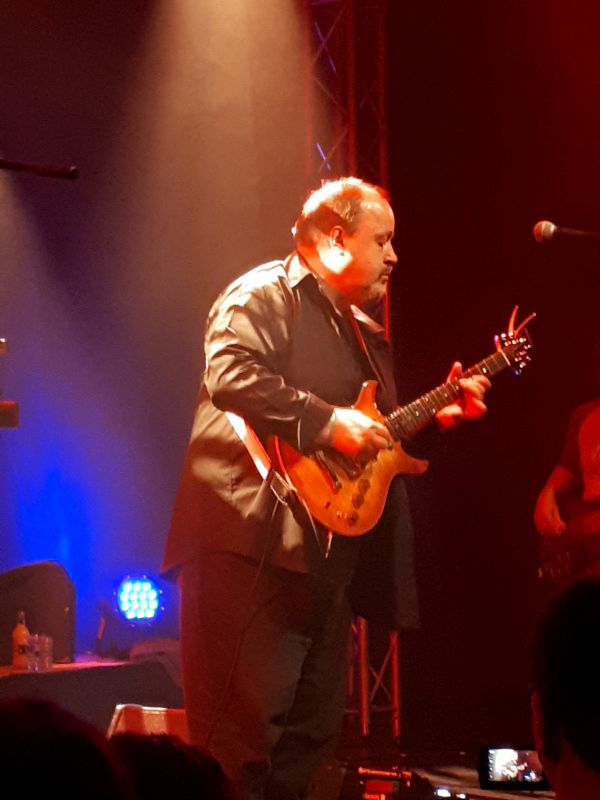 After the interval it was straight into the complete Misplace Childhood album, with Martin Jakubski on vocals whose voice reminded me of a mixture between Alan Reed (Pallas) and Alex Toonen (For Absent Friends). Less charismatic then Fish, but sure and confident Jakubksi fitted in nicely, and once the crowd was gently warmed up by Pseudo Silk Kimono and Kayleigh, iconic track Lavender totally awakened the audience, singing every line with/for him, a sight for sore eyes.

Bitter Suite and Heart Of Lothian followed, greeted with much appraisal by the now fully energetic crowd. The second half of the album flew by in a haze culminating in a heart-warming applause, gracefully accepted by Rothery and his band-mates, who obviously seemed to enjoy it themselves immensely.

From there on in the party carried on with some deep tracks by Marillion, the first of which Waiting To Happen proved to fit like a glove to Jakubski, nailing it precisely the way Steve Hogarth did it when I witnessed it all those years ago. Easter succeeded once again to send shivers down my spine during the extremely sensitive guitar-solo, one of the best ever put on record by Marillion.

After Rothery's personal penultimate track Cinderella Search going down a storm, Incubus closed the regular set. You could have left happily; but you know how it works with encores, reminded Steve us reassuringly. 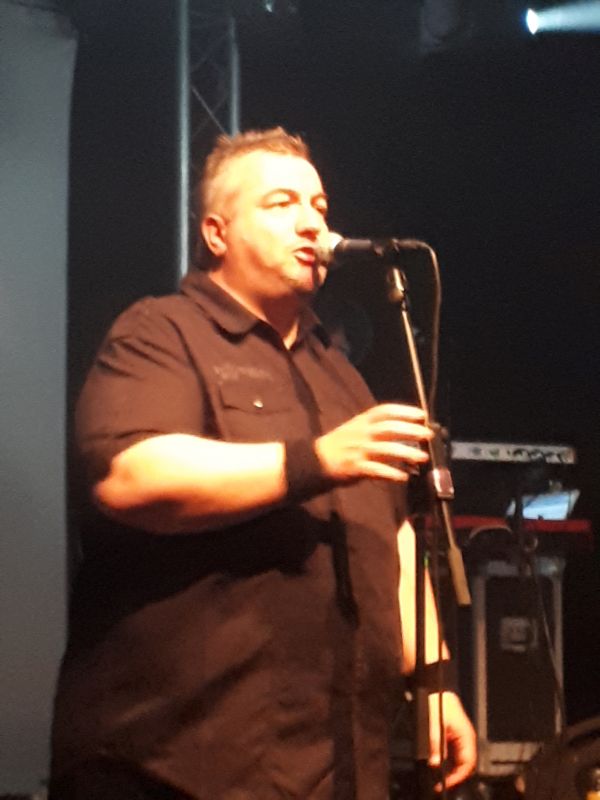 Afraid Of Sunlight turned out to be one of the highlights of the evening with a remarkable performance on Jakubski's part, throwing out several high notes and making this really his song, not the other Steve's. Freaks, dedicated to 'The Web, Holland' for participating in organizing the event, followed, eventually leading up to a solid and strong finish with Fugazi, a favourite for many judging from the reactions and smiles around me. 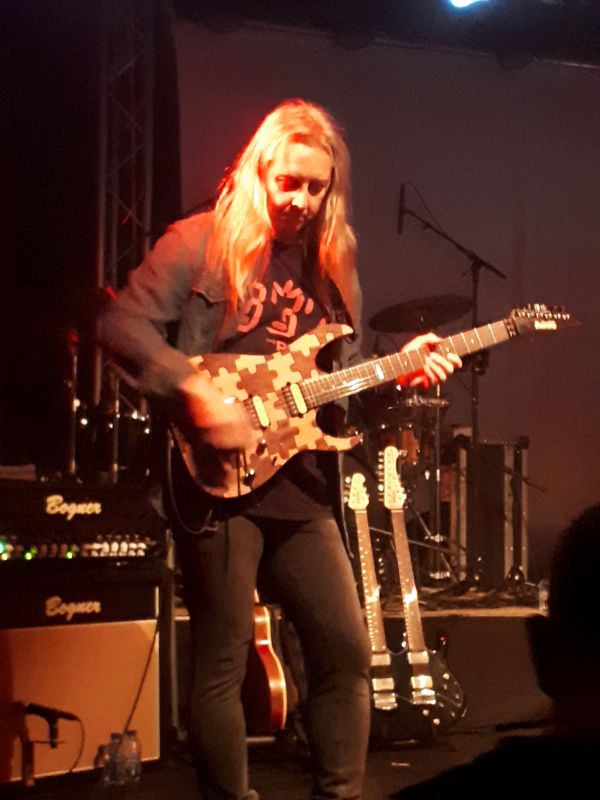 At long last, with the musical part over (soothingly balanced and mixed by the sound-engineer), Rothery promised to be at the stand in a few minutes for pictures, signatures and happily chatting to fans, which might have lasted several hours for during the concert I got the impression that most of the audience know the band on first name basis and vice versa.

I left shortly after however, having witnessed a marvellous concert, re-acquainting myself with lovely symphonic/progressive rock I got to adore as a child (and still do). In hindsight I should have re-arranged my Saturday, for apparently a song about something green, not Shrek, was played; but alas, so this is only the Friday on review.

If the opportunity arises my advice would be to just go and indulge yourself, for hearing perfect renditions of songs like Incubus, Afraid Of Sunlight and Fugazi is worth the price of admission alone.