Budapest has much to offer visitors. It is located in a magnificent setting and the view from Buda castle has a capacity to take the breath away. The city is steeped in history and culture and is adorned with many fine buildings and theatres. It is also the home of a rather fine prog band.

The lights dimmed, the dry ice hung cloyingly caressing the crevices of the stage to form pearlescent puddles of mist. Starlit and techno bright, laser lights dodged and quivered. A gaggle of cutting light shafts emit a Kaleidoscopic hue, as they dance vigorously to seek out, lock on to and illuminate the statuesque silhouettes of the band and their guests.

Solaris' live rendition of Nostradamus The Book of Prophecies had begun. 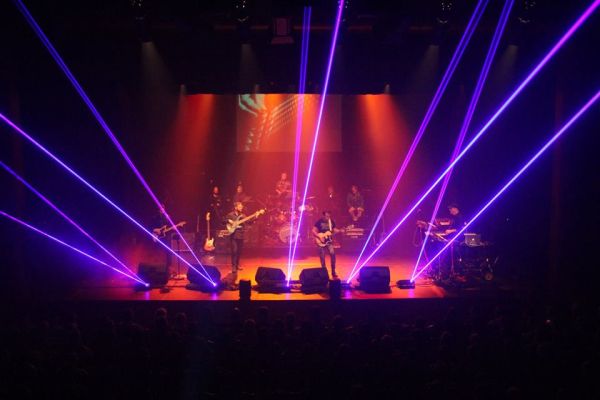 Nostradamus was released in 1999 and is the bands third studio album and. It differs and stands apart with the exception of Martian Chronicles 11 from the bands other albums, as it is not an entirely instrumental affair. In Nostradamus, the human voice has a dramatic and powerful instrumental role to play.

The album contains operatic passages and chant like Gregorian interludes sung in Latin. It is probably Solaris' most varied studio album. It contains a delightful mix of tempos and provides many opportunities for exploring light and shade. It is also includes energetic flute parts face gurning guitar passages, and a variety of sounds and embellishments that emanate from Robert Erdesz's large array of keyboards. The whole piece is supported by a buoyant rhythm section and includes many meaningful bass interludes.

The relative complexity of the Nostradamus album, means that any attempt to play it live, is an ambitious undertaking, that offers many challenges and has numerous potential pitfalls. 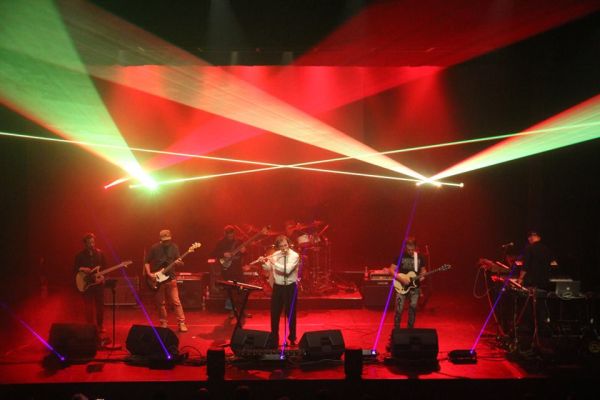 However, by the end of the first half of the show, it was obvious that what must have been, hours of practice and dedication had paid off. The band was able to deliver a moving and almost faultless live performance of the album. On its conclusion, the excellence of the interpretation of the album had the near sell-out crowd, bellowing and clapping in rhythmic unison for more and even more.

This concert lived up to all expectations. It has become somewhat a tradition that the members of Solaris get together on a yearly basis, to offer their fans a chance to hear and see them play. The band and their supporters have an obvious connection The respect that each has for the other was clear, and could be easily observed by the way the band's music was received and also by the way in which the band members met and chatted with the audience after the show. 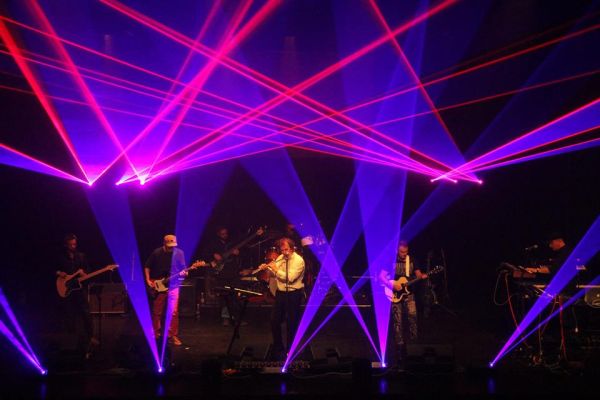 The first half of the show illustrated how utterly compelling prog can be. The band delivered the entire album without pause for either song introductions, or audience applause. The band delivered the different parts of the suite with considerable aplomb. Each piece segued seamlessly into the other to create an atmospheric and sometimes surreal experience, which was compelling in every respect.

In the first half of the concert, rhythm guitarist Hámori Máté aided the band. His contribution filled in the band's sound to good effect and gave a number of the sections of the album a gritty rhythmic quality. His sensitive rhythmic embellishments helped to emphasise the expressive shape shifting guitar work of Bogdán Csaba. On the rare occasions when Hámori‘s role took on greater prominence to deliver his own lead parts, these were delivered with more than enough skill and expression to satisfy.

The band was able to deliver the full dynamic range of the Nostradamus suite with great success. Full-blown ensemble passages juxtaposed with emotive chanting and gentle recorder led interludes created a captivating mix of light and shade. The balance between bombast and subtlety was superb. 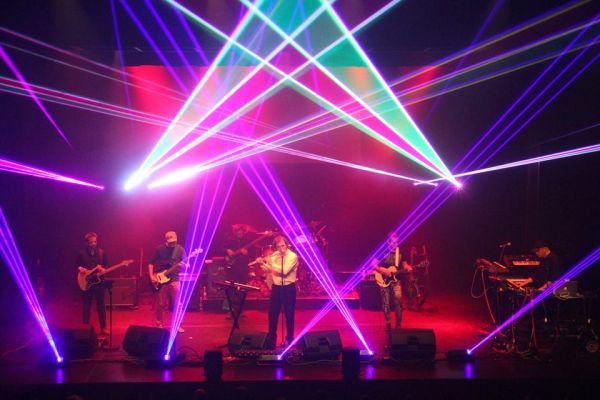 The live performance of Duel and The Lions Empire was particularly impressive. As well as including choral voices, Duel centres on a breathy flute riff accompanied by fluidly expressive guitar and keyboard parts. It ranks as one of the most powerful tunes ever written by the band.

I felt that the performance was even more enchanting than that captured in the bands 2007 Live in Mexico release. In that live recording of Solaris performance of Nostradamus at the Teatro De La Ciudad in Mexico on the 23rd March 2004, the singing is full of energy and vigour and the band plays exceptionally well. However, no matter how good that disc might be, it arguably fades into grey, when compared to the colourful display of skill raw energy, gravitas and sheer emotional pull that the band were able to generate and display in their presentation of the music of the Book of Prophecies on this occasion.

The exuberance of the guest singers created much of the atmosphere that exhibited in the first half of the show. Note perfect in every respect and with a wide dynamic range that demanded that the audience took note; they delivered their parts in great style. 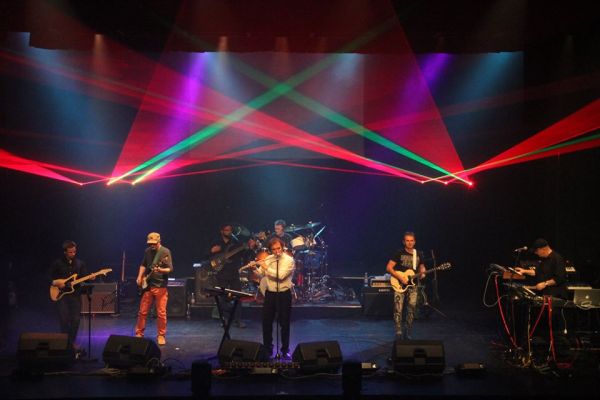 The first half of the gig was an exemplary display of how to present a lengthy suite of music in a fresh and inventive way, whilst retaining much of the ambience of the original.

In many ways, the second half of the gig was even more rewarding. It was crammed with fan pleasing tunes from the bands back catalogue. Solaris offered a consummate display of how to breathe energy and new life into a set of tunes that the audience may have heard many times before. The volume was raised a notch and a relentless chain of familiar tunes, made fresh and reinvigorated by the bands energetic interpretation ensued.

In this section of the gig Bogdan's, frenetic riffing and imaginative soloing came to the fore. The granite riffed peaks of Apocalypse were particularly appealing. Much of Solaris signature sound is centres upon Robert Erdesz dazzling array of effects and fine keyboard skills. His synth accompaniments are as much a trademark of Solaris as Kollár's flute and his sonorous repartee with both the flute and guitar did not disappoint throughout the evening. 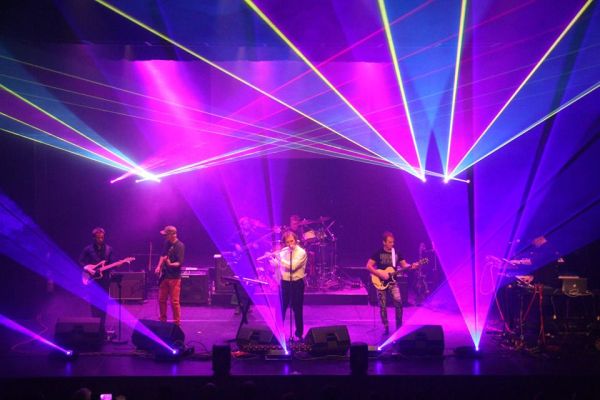 However, as a declared lover of flute prog rock, I find the use of the flute in Solaris music particularly appealing. The swirling interjections of Kollár Attila consistently quickened my pulse and rattled my digits. His overblown snarling flute work in the second half of the show in tunes like Mar's Poetica was memorable and contrasted beautifully with the subtle stylings and delicate use of the flute in the tantalising melody of the impressive Duo and in the placid melodic structure of the striking If The Fog Clears Away.

A special mention should be made of bassist Szendőfi Balázs. He is a very accomplished player and it was a real pleasure to witness close hand the range of styles and techniques he uses to embellish the bands bottom end sound.

Nowhere was this more apparent than during his sensitive accompaniment to Kollár's flute during Duo, dedicated to the bands guitarist István Cziglán, who passed away some years ago. The impressively rhythmic Counterpoint saw the drum stool of the band on stage vacated. The piece involved a tribute with archive video footage of Solaris' drummer Tóth Vilmos who died in 2013. 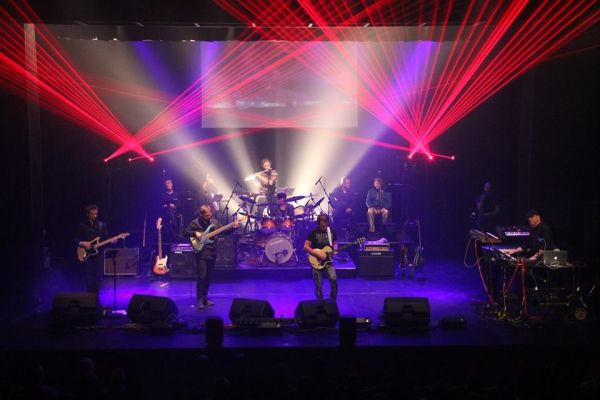 On stage, Gömör László for the most part, performed drum duties. In the second half of the show, another Solaris drummer Raus Ferenc joined the band for a number of tunes. All three drummers involved in the gig were outstanding.

Overall, it was a fantastic show. At its conclusion, Solaris' manager announced that if things go to plan, then the band will be releasing a new album Nostradamus 2 next year and that the premier of the new material will take place in next year does annual Solaris concert in Budapest.

Budapest, has lots to offer visitors, the transport system is excellent, making it easy to get around. The Parliament building is an impressive piece of architecture. Did I mention that the city is also the base for a rather fine prog band?