This chapter tells you about the history of DPRP.net, which astoundingly is already over a quarter of a century old!

We're not exactly sure, but many years after the fact, it was deduced that it must have been October 1995 that Martijn Albering and Jerry van Kooten founded the Dutch Progressive Rock Page. Some time before that, Martijn had started an Arena fan page but had started to include information on other bands as well. He asked Jerry to help, and together they decided to make it about progressive rock in general.

Getting information on progressive rock bands was not easy in those early days of the web. Bands didn't have their own websites, there were no news sites, and Google was not active yet.

The main goal of DPRP was providing information to people about progressive rock bands. We had a News section, a Gig Guide, and started to hosted several band websites as well, some fanpages but also some official band pages until they had their own web space (Arena - The Cage, Chinawhite, Evergrey, IQ - The Lush Attic, Jadis, Kayak fanpage Close To The Fire, Monolith (USA), Pallas, Pendragon, Spock's Beard - Gibberish, Triangle, Twelfth Night, Wolverine), all maintained by our slowly growing team.

Although "Dutch" is part of the name, the site has always been in English. It was just set up by a couple of people from Holland.

DPRP was first hosted on a regular user account. Then in the summer of 1997, the server on which DPRP was located, was shut down for several months and the site slowly started to lose its rather large following (for its time, that is; the site had about 350 visitors per day). The need for a new provider became very clear in these frustrating months and after several set-backs with other potential internet providers, a sponsoring agreement was made with web host company Vuurwerk.

The team started to re-design the pages and in November 1997 the Dutch Progressive Rock Page moved to their new URL, www.dprp.vuurwerk.nl. The name was cause of some confusion, as some people called us "the Vuurwerk site". Ah well.

The team got their first, and certainly not the last, non-Dutch member! A "human-shaped figure with the usual collection of limbs", as he described himself, under the name of Neil Durant.

1998 deserves a special mention for a few reasons. Not the least for Peter Nicholls making caricatures for each of the DPRP team members. 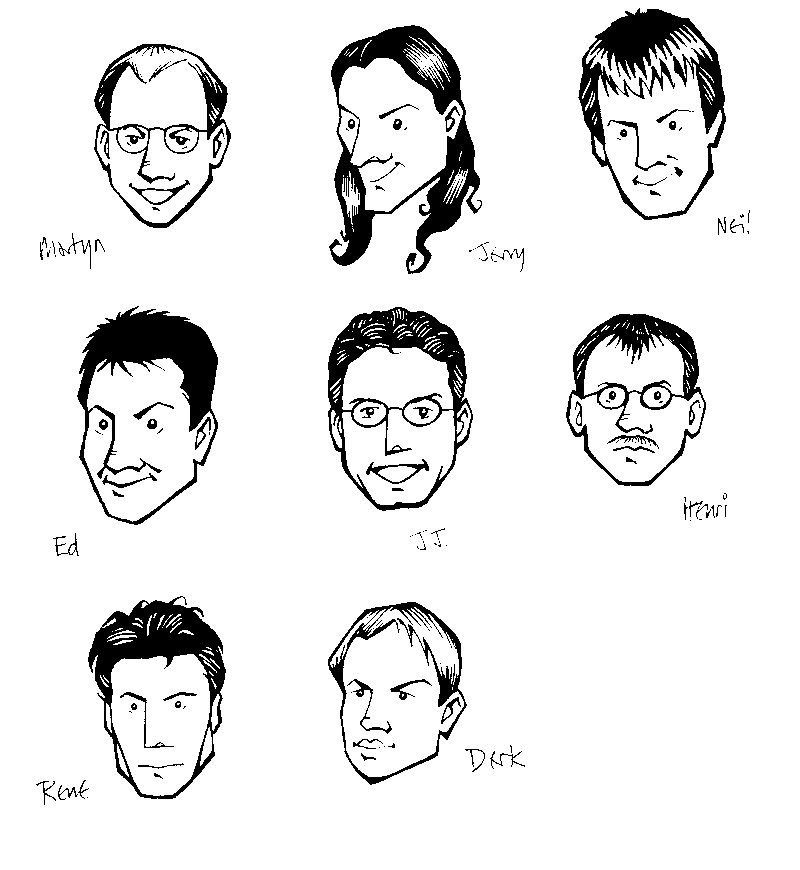 Note that our then team member Neil Durant is now a colleague of Peter Nicholls in IQ!

Thanks to Mattias Norén we finally had a decent layout and design! We had been working with something like this:

and thanks to Mattias we got this:

In 1999 we had a hugely popular series of articles named Counting Out Time.

Late 2002 we received notice from Vuurwerk that we had to look for a new sponsor. We were grateful for 7 years of sponsored web hosting. Early 2003 we registered the DPRP.net domain name and we started preparing for a move from our host sponsor Vuurwerk.

February 2004 it was finally there: DPRP was hosted on our own domain. Web hosting was now sponsored by E-Sound, a multi-media company in Weesp, Holland.

The team had grown to about 20 people and included people from around the world. Maintaining the site was becoming harder. An attempt was made to turn it into a WordPress site but that didn't stick either, since we needed a little more than what was possible, and writing plugins was harder than to write the back-end code from scratch.

It was great to see how many new categories had come, and several also gone. CDelight was a focus on a single album. The Art Corner was Mattias' take on the artwork of new albums.

Now screens became bigger, we decided to widen the layout of the page and also modernise it a bit. Well, easier to maintain, that was also an argument to go this way.

The lack of a designer gave us no other option than to make small changes. We adapted to the most common width for websites:

2015 was the year of our 20th anniversary. After a really long time we changed the layout of the site. With Guille Paladino we finally had a designer on the team again. He gave DPRP.net a fresh design. We maintained the hat from Mattias' logo.

Mattias' design had lasted for 16 years!

E-Sound announced they were stopping their hosting activities completely (those were sold to a different company), so we had to find a new host again. This time we didn't try and find a sponsor. We're paying for everything ourselves now. And you'll notice we still have not had any advertising (except for a few banners through the years for prog-related releases and events). Maybe we should accept donations? 😉

Around this time we decided we were going to discontinue the News section. The original goal was to bring news on progressive rock bands. But the world had changed and we were getting so many press releases that the News page was just a collection of messages you could get everywhere. It took a long time to compile this section and the content had obviously lost its value.

Partly for the same reason, we decided to stop with the Gig Guides. Several years before we started with listing every gig we got information about. When that became too much we limited ourselves to the Netherlands/Belgium and the UK.

The saddest thing in DPRP.net history was the final blow to this section, which was the death of our long-time team member Henri Bos.

We started publishing album reviews in 1998. That was 20 years ago. We marked the occasion with a series of articles, titled 20 Years Of Reviews, revisiting albums that have been reviewed in the past two decades.

Two years later is was 2020, which meant DPRP was 25 years. In this digital age, that is ancient!

2021 sees the latest layout change. It was about time DPRP.net were properly readable on small screens as well. A web designer gave us a modern set of colours to work with, for both a light and dark theme. We modernised the logos we were using. We managed to keep Mattias' hat logo in some form! In fact, we've decided to give it an even more prominent place in the layout, as you can see. Mattias' never expected this when he came up with it as part of his layout and design in 1999!

This new layout also is the first that no longer holds the original, full name Dutch Progressive Rock Page, and only uses the short name which is also the domain name, DPRP.net.

The team has kept on changing of course, but slowly. We're a group of 25 people now.

The new layout has had the highest priority until its release, 2 July 2021. Next up is the conversion of all the old articles (yes, all of them!) that have ever appeared on DPRP.net.